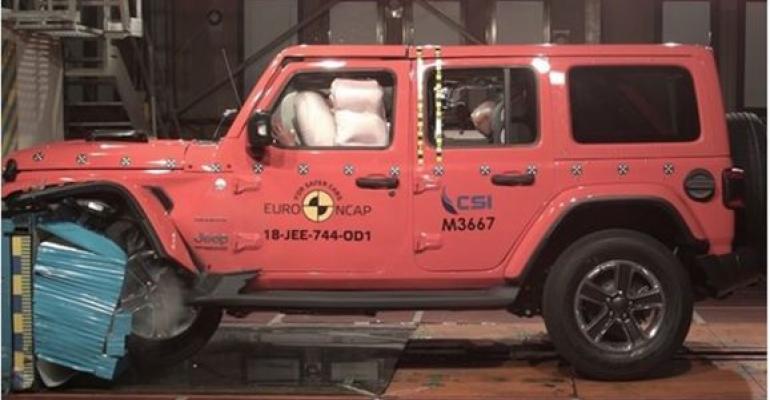 Euro NCAP Secretary General Michiel van Ratingen says that with only a seatbelt reminder and a simple driver-set speed limiter and no other form of driver-assistance system, the Wrangler clears the one-star threshold but lags far behind its competitors.

Fiat Chrysler Automobiles defends the all-new Jeep Wrangler after a European safety-testing agency gives it just one star out of a possible five for safety.

Both 3- and 5-door versions of the 4-wheel-drive ’18 Wrangler, new to the European market, scored 50% for adult-occupant safety, 69% for child occupancy, 49% for vulnerable road users and just 32% for safety-assist features.

Euro NCAP Secretary General Michiel van Ratingen says that with only a seatbelt reminder and a simple driver-set speed limiter and no other form of driver-assistance system, the Wrangler clears the one-star threshold but lags far behind its competitors.

“It is truly disappointing to see a brand-new car being put on sale in 2018 with no autonomous braking system and no lane assistance,” van Ratingen says in a statement. “It is high time we saw a product from the Fiat-Chrysler group offering safety to rival its competitors.”

In response, FCA released a statement saying: “The new Jeep Wrangler – an award-winning vehicle with unmatched capability and worldwide appeal – meets or exceeds federal safety requirements in every market in which it is sold.

“Further, the Jeep Wrangler is engineered to deliver superior performance and unique driving experiences under the most demanding conditions. Testing protocols that apply exclusively to urban scenarios may not align with such a vehicle,” the statement says.

“The vehicle offers more than 70 advanced safety and security features, including four standard-equipment airbags and, starting in early 2019, an advanced automatic emergency braking system that combines the benefits of camera and radar technologies.”

In the U.S., the ’18 Wrangler received a 3-star front-crash rating in NHTSA tests. It has not yet been evaluated by the Insurance Institute for Highway Safety, which subjects vehicles to tests and evaluations more extensive than NHTSA's, the CNET Roadshow website reports. The Wrangler sold in North America is equipped with AEB, FCA says.

Unlike Euro NCAP, active-safety systems are not factored into NHTSA’s final star ratings.

The ’18 Panda received 45% for adult-occupant protection, 16% for child occupancy, 47% for vulnerable road user and just 7% for safety assist. Euro NCAP last tested the minicar in 2011.

With nothing more than a seatbelt reminder scoring points in Euro NCAP’s Safety Assist box, the agency says the vehicle’s failure to achieve a single star was matched only by the Fiat Punto in 2017.