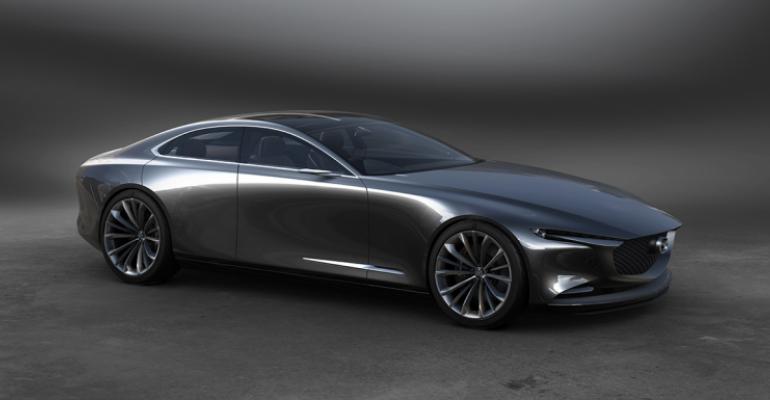 Honda, Mitsubishi, Nissan, Toyota and Lexus concepts feature one or more of the three technologies, while Mazda unveils new engine tech and Subaru hints at the next-generation WRX.

The buzz technologies of the moment, electrification, artificial intelligence and autonomous driving, are on wide display at this year’s Tokyo auto show.

Many Japanese automakers, generally seen as laggards to American and European OEMs on autonomous-vehicle development, have concepts featuring one, two or three of the technologies on their show stands.

Having both electrification and self-driving technology is Honda’s Sports eV concept. Although Honda doesn’t provide any motor, battery or range specifications, the car is the performance model many long-time fans of the brand, lately more enamored with family-oriented offerings, have been pining for.

In addition to autonomous capabilities, also not detailed, the Sports EV has an on-board AI assistant.

Honda doesn’t admit to production aspirations, but the concept electric coupe with a fastback appearance and a ultra-low ride height shares a platform with the Urban EV CUV concept from September’s Frankfurt auto show, due in Europe in 2019 and Japan in 2020. 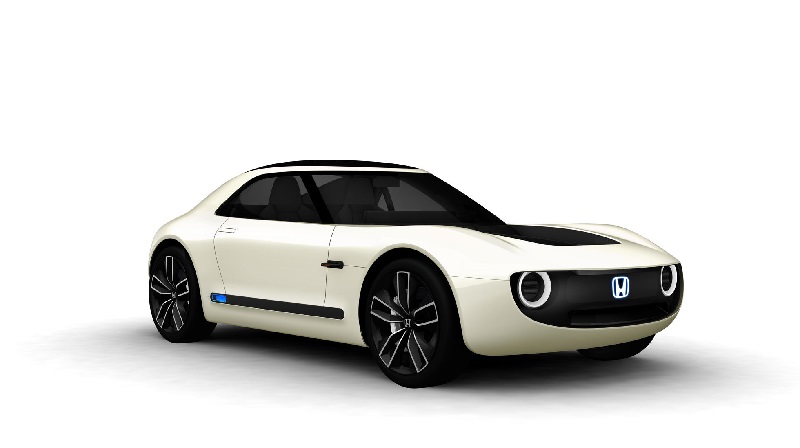 Honda wants two-thirds of its global sales volume to be electrified vehicles (battery EVs, as well as hybrids and plug-in hybrids) by 2030.

At the Lexus stand, the luxury brand stages the premiere of the LS+ concept, hinting at future automated technology due by 2020.

“(Lexus) intends to make automated driving from entrance ramp to exit ramp on motor-vehicle-only roadways possible by using its Highway Teammate automated driving technologies, which, with an eye toward application in 2020, are featured on the LS+ Concept,” the brand says in a statement.

The LS+ concept also has software that can be updated over the air and AI that “ensures a high level of automated driving” as it learns from road data it takes in.

Autonomous driving is possible via 360-degree sensing capability and the CUV uses blue exterior lighting to signal other vehicles it is in autonomous mode.

The concept also has Nissan’s forthcoming pedestrian-protection sound that will emanate from future production EVs, dubbed “Canto.” Derived from the Latin word for “I sing,” Canto will vary in pitch and tone while backing up, accelerating and decelerating, Nissan says. 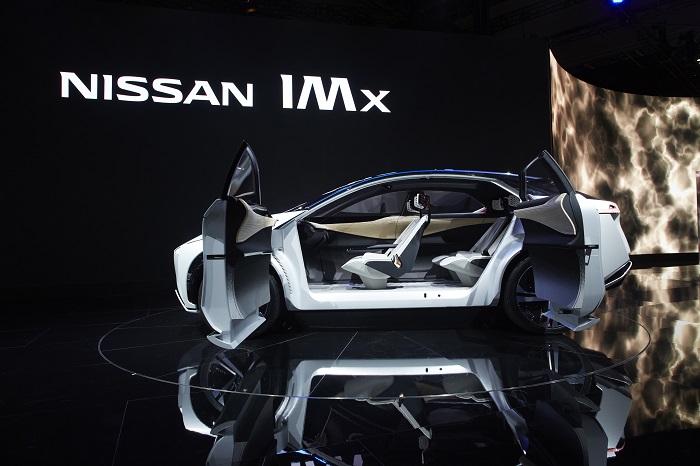 The sound will be active between 12 and 19 mph (20-30 km/h). The speed variation is due to differing government regulations by country. Battery EVs or hybrids operating in electric mode are known for their quiet operation and seen as a safety threat to pedestrians accustomed to listening for engine noise to detect an oncoming vehicle.

Mitsubishi, now part of the Nissan-Renault Alliance, debuts its e-Evolution concept. But despite the name it is an all-electric utility vehicle, not a gasoline-powered performance sedan like the defunct Lancer EVO.

Despite claims of it being a high-performance model, Mitsubishi provides no torque figure. Range is not given, either. Batteries are placed midship, Mitsubishi says, adding the CUV uses a 3-motor system (one front, two rear) that is tied into its Super All-Wheel Control all-wheel-drive technology to improve cornering and traction.

It has an AI system whose sensors read changes in road and traffic conditions, as well as driver intention.

The car can adapt to “drivers of all abilities,” thanks to a coaching feature of the AI system.

“After building a picture of the driver’s skill level, the system constructs a training program that provides advice through voice dialogue and a large dashboard display,” Mitsubishi says.

Styling cues of the e-Evolution include strong shoulders, full glass windows, narrow hips and two roof rails. Inside, the absence of an internal-combustion engine created room for a “floating” instrument panel and large flat screen that runs the width of the interior and is flanked by two smaller screens.

Toyota, which revealed its Tokyo lineup last week, has its Fine-Comfort Ride concept on display. The sedan uses AI to read driver emotions and has a hydrogen-fuel-cell-based powertrain, using electricity generated by hydrogen and oxygen in a fuel-cell stack, and stored in a battery, as its fuel source. The concept car’s range is 621 miles (1,000 km), Toyota says.

Bucking the electrification and autonomous trends, not unexpectedly, is Mazda. The automaker is a long-time advocate of vehicles geared toward driving enthusiasts and internal-combustion-engine-based propulsion.

The relatively small-volume brand debuts two concepts, neither of which have electrification or autonomous abilities.

The Kai concept is a compact hatchback that uses Mazda’s next-generation Skyactiv engine technology, as well as a next-gen Skyactiv vehicle architecture, targeting a quieter, more comfortable ride, as well as enhanced performance.

SCCI works by using a spark plug to light a high-pressure fireball in the chamber, compressing a lean mix of air and fuel, Reuters reported last week, adding precise monitoring of each movement in the combustion chamber makes it possible.

Skyactiv-X engines with SCCI are due in 2019, a year after Nissan is set to debut its variable-compression ignition technology on Infiniti luxury models in 2018.

The new Skyactiv architecture shows an increased focus on “human-centered design…to maximize the inherent ability of the human body,” Mazda says, promising more comfortable, less tiring driving thanks to new seats that should keep the pelvis more upright to maintain the “S” curve of the spine. A multi-directional ring structure in the body will transmit inputs quicker, and each part of the chassis interacts to “smoothly control energy transfer to the sprung mass.”

The small Japanese automaker also is known for an emphasis on vehicle design, and the Kai as well as its other concept in Tokyo, the Vision Coupe, both showcase the future of its Kodo design language.

Reflections are said to “delicately flow” over the Kai’s body sides, while the stunning Vision Coupe concept uses a “Japanese aesthetic” in an effort toward more premium, elegant appearances.

The Vision Coupe has a “one motion” form to give a sense of speed, while the car’s interior relies on a “strong longitudinal axis,” Mazda says.

Also shunning the prevailing trends, Subaru offers up another Viziv show car, this time a performance concept and the first concept in the series with a sedan body style.

The car, a hint at the next-gen WRX performance sedan, is primarily a styling exercise, meant to showcase the future of the brand’s “Dynamic x Solid” design language.

Design cues include a “rigid, forward-thrusting body,” as well as flared fenders and carbon-fiber bumper, fender and roof elements.

The car also showcases updates to the automaker’s EyeSight driver-assist technologies due around 2020, as well as its radar and GPS/navigation systems. 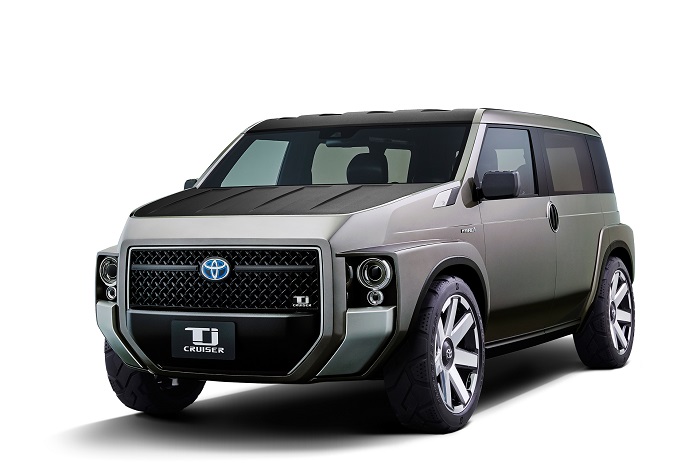 The weird and wacky concepts the Tokyo show is known for also are on display, including Toyota Auto Body’s Wonder Capsule concept, an electric 2-seater with a glow-in-the-dark interior; Toyota’s panel-van-like TJ Cruiser complete with its own mini surfboard; Honda’s RoboCas concept, an autonomous “mobility product” that could be used as a coffee stand or other business, complete with a canopy and anime-like eyes; and Suzuki’s e-Survivor, a Jimny-like 2-person SUV with four in-wheel electric motors.