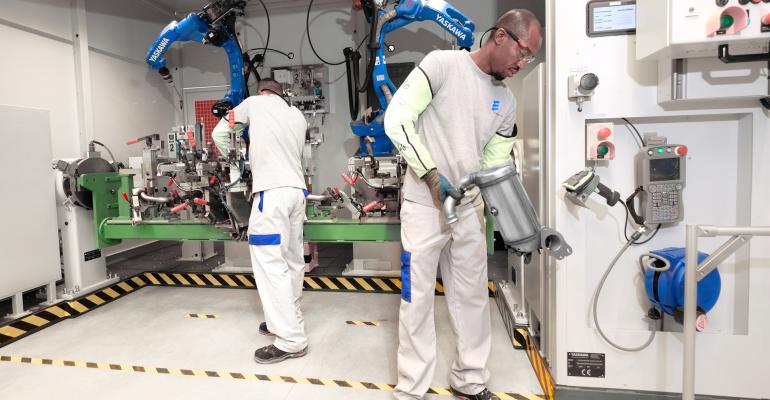 The 296,000-sq.-ft. plant, built in less than 10 months in the municipality of Tondela, supplies European automakersʼ plants in Spain, Portugal and northern Morocco with hot-end and cold-end components for diesel and gasoline vehicles.

The 296,000-sq.-ft. (27,500-sq.-m) plant, built in less than 10 months on a 4.7-acre (11.5-ha) site in the municipality of Tondela, supplies European automakersʼ plants in Spain, Portugal and northern Morocco with hot-end and cold-end components for diesel and gasoline vehicles. This includes complete exhaust systems as well as gasoline particulate filters and catalytic converters, Eberspaecher says in a news release.

By 2020, the plant is scheduled to reach annual production capacity of 2.5 million exhaust-system components. This equates to manufacturing a catalytic converter on the automatic and flexible production lines every 25 seconds at full capacity. The facility initially has 120 employees and will have as many as 550 in the medium term, the release says.

“This plant represents an important milestone for the expansion of our European exhaust technology production network,” Thomas Waldhier, chief operating officer of Eberspaecherʼs Exhaust Technology Div., says at the ceremonial launch of production at the facility.

“Tondela provides us with the optimal starting point for establishing closer ties with our customers on the entire Iberian Peninsula. In addition to the excellent logistical integration, the availability of very well-trained personnel also represented a persuasive argument.”

There is an office complex in addition to the production and logistics building.

Eberspaecher has 30 global production sites and currently is constructing an Asian Tech Center for exhaust-system testing and prototyping in Shanghai, China.