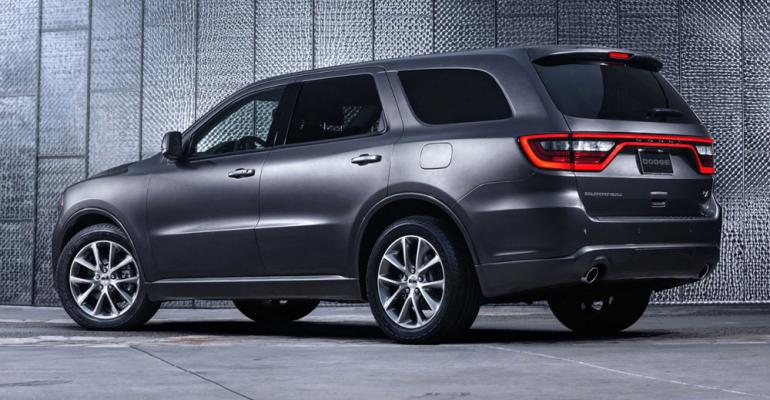 Demand outpacing production can be a good problem to have, but it&rsquo;s also a challenge for executives who must figure out how to squeeze more volume out of existing resources.

DETROIT – Chrysler insiders predict increased demand when a heavily refreshed ’14 Dodge Durango hits dealers later this year, but that could cause constraints at the factory where the SUV is assembled.

For ’14, the Durango gets an 8-speed automatic transmission, an overhauled interior and modified exterior design. Executives have spoken of increasing marketing for the SUV, which largely has been dormant of late.

“We’re really thrilled about the new Durango that we’ve got coming,” Scott Garberding, senior vice president-manufacturing, tells reporters at the auto maker’s Jefferson North Assembly Plant here, where the Durango shares capacity with the high-volume Jeep Grand Cherokee. “I think it’ll be very well-received and give us some more problems to solve and thinking to do.”

Should demand exceed production, Chrysler can shift the mix between the Durango and Grand Cherokee, Garberding says, or “we would look at other plants or other facilities for the option of producing it there.”

Chrysler also still is investigating how to increase Wrangler production, a constraint the auto maker has faced for years. The Toledo, OH, plant is running two shifts, compared with the Grand Cherokee and Ram truck plants, which operate with three crews.

“We’re looking at other ideas, but we’re thrilled at all this demand,” Garberding says. “If it’s looking like demand we can’t meet, we’ll look at big-picture options.

“We’re obviously trying to utilize the assets that we have thoroughly, and we have some interesting ideas that I can’t talk about today in detail to utilize our assets even more so.”

The auto maker has taken smaller steps to increase capacity, eliminating bottlenecks through its World Class Manufacturing, a Fiat-Chrysler initiative to improve factory quality. One notable example, Garberding says, is a productivity improvement achieved in the Wrangler paint shop.

The moves are helping limit the need for overtime. While there are three crews at Jefferson North, Garberding says the auto maker will not force employees to work more than 40 hours per week, nor is a fourth shift on the table.

“We can’t run 168 hours a week. This 3-crew schedule works nicely for us because our base schedule is 120 hours a week, so we do have time to get in and do maintenance,” he says. “We’re not working our employees into the ground, either.”

Separately, Chrysler insiders remain confident about the Jeep Cherokee launch, despite a month-long delay to September.

The Cherokee’s rollout has stalled due to software issues within the 9-speed automatic transmission designed by ZF and licensed by the auto maker. “It’s hard to pick that apart,” Garberding says about both manufacturers’ input into the software design.

The SUV takes a new 2.4L engine assembled at Chrysler’s Dundee, MI, plant, which Garberding predicts will “become a heavier part of our schedule” going forward.

Chrysler emphasizes the Cherokee remains on schedule to hit showrooms in the third quarter and it’s not uncommon for an auto maker to tweak a product until the 11th hour.

“I’ve had a few experiences along the way with Jeep, but this is certainly the most visible,” Jim Morrison, director-product marketing, tells WardsAuto.