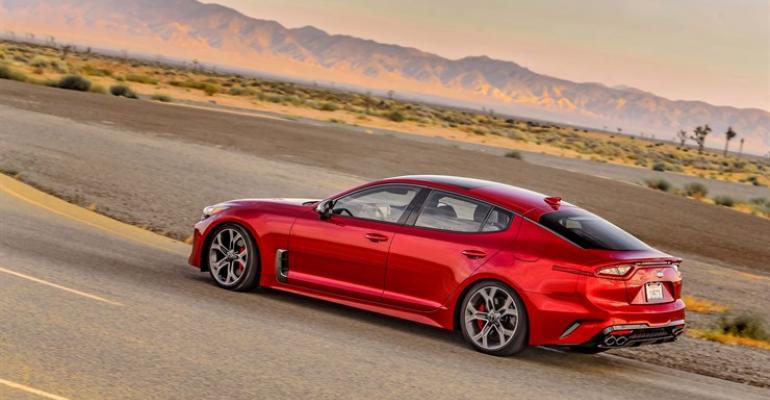 A Dissenting Opinion on NACTOY Winners

The Kia Stinger is something new in a segment that badly needs innovation. Kia took big risks and broke new ground. To me it is most deserving of the North American Car of the Year award.&nbsp;&nbsp;

DETROIT – I’ve been a juror for the North American Car and Truck of the Year awards for close to two decades. I’m still not great at predicting the winners, but it’s pretty easy this year to understand why the Honda Accord, Lincoln Navigator and Volvo XC60 were named Car-, Truck- and Utility-of-the-Year even though I disagree with two of the three choices on the nine finalists.

All three of the sedan finalists are excellent vehicles with great engines. The Honda Accord has a powerful presence, sleek exterior design and looks and handles more like a luxury sport-sedan than a family car.

The first time I put my foot down I could not believe it was not a big V-6. It is a milder version of the spectacular 306-hp engine in the Civic Type R which WardsAuto named a 2018 Wards 10 Best Engine. Honda is so serious about the sporting character of the car it offers a 6-speed manual transmission. The vast majority of car buyers don’t care, but a lot of automotive journalists, and many NACTOY jurors, were impressed by this, including me. But I didn’t give any points to the Accord. I’ll explain why in minute.

The Toyota Camry also easily could have won on its merits. Unlike the Accord, its strongest point is its interior. It’s distinctive, has a big center-stack display screen and excellent overall user experience. Higher trim levels feature buttery soft red leather and are sumptuous. It would be at home in a high-end Lexus.

The Camry has a softer ride than the Accord and is geared more to comfort than handling. It excels under the hood but in a different way than the Accord. Its 2.5L Dynamic Force engine is one of the most thermally efficient mainstream engines available.

It’s a little grumbly at some speeds, but the hybrid-electric version is a delight to drive and enables this roomy sedan to rival the fuel-efficiency of the Prius hybrid. The hybrid powertrain was named a 2018 Wards 10 Best Engine. Despite all these impressive features, I didn’t vote for the Camry either.

Instead, I gave all my points to the Kia Stinger. It also has a 2018 Wards 10 Best Engine under the hood, but it is an absolute beast, making 365 hp and a whopping 376 lb. ft. (510 Nm) of torque. Not only is it fast, its roomy hatchback design gives it CUV-like practicality. What’s more, Kia designers created great proportions for the car, making the big hatchback beautiful  from all angles. It’s not an easy task. Just ask their counterparts at Porsche and Audi that struggled with the look of the Panamara and A7.

The new Accord and Camry are highly evolved and refined products, but the Kia Stinger is something new in a segment that badly needs innovation. Kia took big risks and broke new ground with the Stinger. To me, it is most deserving of the North American Car of the Year award.

The truck category is easier to understand. The Colorado ZR2 is a powerful midsize pickup designed to be more of an off-road recreational vehicle than an everyday pickup. It’s a great idea, but too much of a niche product to be named Truck of the Year.

The Ford Expedition and Lincoln Navigator are trucks, too. They are siblings, big, luxurious SUVs based on the Ford F-150 pickup truck platform.

The Expedition is less expensive, starting at about $52,000, but my loaded-up tester was $80,000. The Navigator starts at $72,000, but my test vehicle was more than $90,000. These price tags are not unusual in the world of Cadillac Escalades and big Range Rovers, which frequently explore deep into 6-figure territory.

The Expedition is nice, but the Navigator invented the full-size luxury segment 20 years ago. It epitomizes excessive, over-the-top extravagance combined with serious power and off-road capabilities. In this case, my colleagues and I agree this guilty pleasure deserves to be called Truck of the Year.

However I differed once again in the voting for the Utility of the Year, a new category that aims to recognize car-based, rather than truck-based, SUVs, CUVs and Minivans. The Honda Odyssey is one of the most practical and efficient people movers ever created, and the Volvo XC60 introduces a new and beautiful design vocabulary and efficiency ethic to the segment. But the Odyssey is another evolutionary product and the Volvo borrows almost all the design features and components found in its sibling XC90 and recent Volvo sedans. It looks great, but we’ve seen most of this before.

Instead, I voted for the Alfa Stelvio. It’s fast, developed by a team led by two senior managers from Ferrari and has great design inside and out. Like the Kia Stinger, it brings some new ideas and emotion to the CUV party. Alas, not enough of my 60 or so colleagues were not convinced.

Here’s Why Lincoln Navigator is North American Truck of the Year
Jan 15, 2018