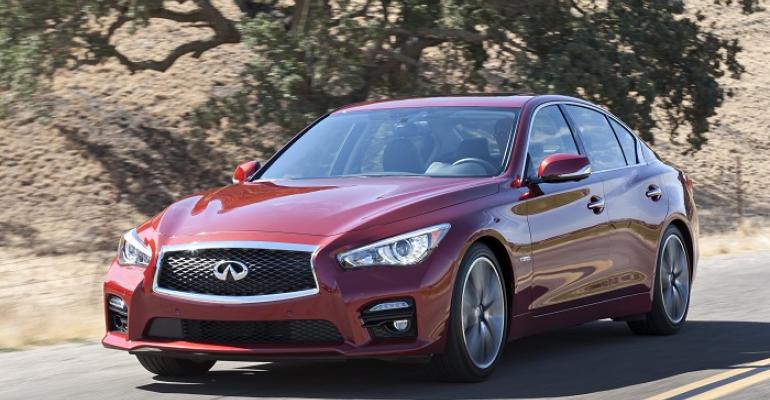 Waiting until a vehicle was all-new to change its name, or doing an ad campaign to communicate the name changes, are ways Infiniti could have improved the nomenclature switch, officials say.&nbsp;

SAN DIEGO – Changing its vehicle names two years ago to variants of Q and QX harmed Infiniti sales and awareness in the U.S., but company officials still believe it was the right thing to do.

“We saw a drop pretty much across the board when we switched names,” Sean McNamara, senior manager-product planning for Infiniti Americas tells media at a ’16 QX50 event here.

The nomenclature change was shepherded by former Infiniti President Johan de Nysschen, now president of Cadillac, to align the Japanese luxury marque more closely with its German competitors as it expanded globally.

Infiniti’s naming convention most specifically mimics de Nysschen’s former employer Audi, which uses A for its cars and Q for its utility vehicles. Both brands assign a number or numbers after the letters to indicate vehicle size, segmentation and price. For instance, the upcoming Q30 will be Infiniti’s compact car, while the A3 is Audi’s.

It’s difficult to bear out the phenomenon using sales data due to Infiniti’s relatively old lineup and segment trends, but in cases where a vehicle’s name was changed but the vehicle was not updated sales did slide, WardsAuto data shows.

The EX and FX CUVs saw the most precipitous declines when their names were changed to QX50 and QX70, respectively.

The EX/QX50 has not been fully redesigned since it debuted in 2007, while the FX hasn't gotten a total overhaul since 2008.

Buyers no doubt have been especially confused about the brand’s midsize-car lineup. Infiniti sold the G37 sedan or coupe prior to the name changes. When the successor to the G sedan came out two years ago, the Q50, Infiniti continued to sell the G sedan for price reasons, but the G coupe became the Q60. Infiniti has kept the G 4-door in the lineup but last year renamed it the Q40.

McNamara says the QX80 large SUV was one of the rare Infinitis that didn’t take that much of a hit when the nomenclature switch occurred, as its prior name, QX56, was similar and the vehicle was well into its second generation.

Infiniti now is “digging our way out of” the naming switch and awareness of the brand and its models has been improving, he says.

“I think people are finally getting used to it. I think it took a little bit of training for dealers and everybody else to realize there’s actually some (naming) logic (according to) size and price.”

But while McNamara and an Infiniti spokesman agree the name changes were needed for the brand’s long-term success, in hindsight the rollout could have been better implemented. Advertising to communicate the new names or waiting to change a name until a vehicle was redesigned are two ways they say the plan could have been improved upon.

Helping raise Infiniti awareness, and awareness of the brand’s individual models, the spokesman says, include more advertising (a campaign for the QX60 3-row CUV is active and there is an upcoming digital promotion for a refreshed QX50) and media coverage of new or refreshed models.

“What really helps is when you do an all-new model or a refresh,” he says.

Infiniti Sales Up This Year on Light Trucks

Early in the year, then Infiniti Americas Vice President Michael Bartsch told WardsAuto the brand was hoping to keep sales steady in a year with no new product launches.

Infiniti has done better than that, with sales through September up 12.6% to 95,568, one of the biggest increases among luxury marques (excluding Tesla) and driven by a 22.0% increase in light-truck sales.

Meanwhile, the spokesman is mum on Infiniti’s plans for a new flagship model or an EV. Infiniti showed a Q80 concept flagship last year at the Paris auto show and prior to his departure de Nysschen had been pushing for a production model for 2018.

Elements of the Q80 design are expected to filter down to the upcoming Q30, as well as the QX30 CUV and Q60 midsize coupe.

When asked if an Infiniti EV is dead, the spokesman says, “We haven’t announced any plans.”

Infiniti had intended to bring out a Nissan Leaf-based EV in 2014, then 2015, before tabling the model, reportedly until 2020.

McNamara says the dissolution of EV incentives in Georgia, which had been the No.2 state after California for EV sales, shut down demand there, and that slowdown in EV interest has spread to other states.

He says a friend employed at a rival automaker has not sold a single unit of a certain EV in Florida in six months.

Infiniti Strives to Make QX50 a Contender With Refresh
Sep 28, 2015