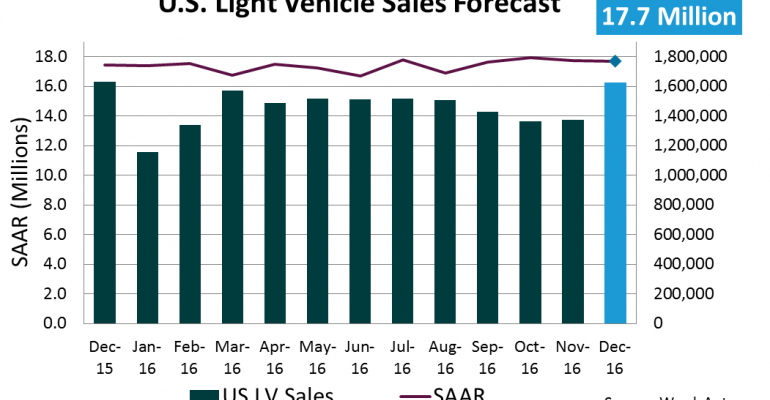 December U.S. light-vehicle sales are forecast to finish strong enough for 2016 to top 2015’s record 17.396 million units. However, actual volume largely will be determined by results in the final third of the month, because a major portion of December’s deliveries typically occur after Christmas.

The forecast 17.7 million-unit seasonally adjusted annual rate is below November’s 17.8 million, but above December 2015’s 17.4 million.

While retail incentives are expected to be well above December 2015, anecdotal evidence two-thirds into the month indicates there has not been much change from November. But automakers still have opportunity to boost incentives and holiday advertising to propel the month above expectations, which they might feel pressure to do considering the current inventory overhang.

Dealers ended November with 4 million units in stock, highest ever for that month. Even with December’s strong sales outlook, inventory still is expected to head into next year at bloated levels, mainly in cars.

December’s volume is forecast at 1.625 million units, an average of 60,188 over the month’s 27 selling days, 3.4% above year-ago’s DSR over 28 selling days. Due to December 2015’s extended sales period, including four days in January vs. three this year, forecasted volume is shy of year-ago by 5,000 units.

Despite the drop in December’s volume, total 2016 sales will end at 17.41 million units, barely edging out the all-time high set last year.

Boding well for the month is generally good economic data and confidence from rising stock indexes. Also, a recent uptick in fuel prices and the announcement earlier this month by the Federal Reserve that it is raising short-term interest rates are not expected to create headwinds.

The retail portion of the market, thanks to higher year-over-year incentives, is expected to be more of a driver than fleet volume. Estimated fleet volume has declined year-over-year in four of the past five months, and more automakers are joining the move to reduce sales to rental companies. Thus, although there still is time for automakers to shift some fleet volume from next year into December, deliveries likely will remain flat or below year-ago levels.

Trucks will continue to pull the market up. In fact, December will be only the second month on record in which truck volume tops 1 million units. The first time was July 2005, when employee-pricing-themed incentives caused a surge to a 21 million-unit SAAR.

Trucks are forecast to account for 64% of December’s volume, an all-time high for any month. Expect especially solid year-over-year results from Small Pickups, CUVs and SUVs.

European luxury brands, riding the crest of strong luxury CUV growth, should record hefty gains compared with last December. December is a strong month on a seasonal basis for luxury vehicles. That could help the inventory overload in luxury cars, while slower production in Q1 2017 likely will be the main course of action for paring stocks in the other car segments.