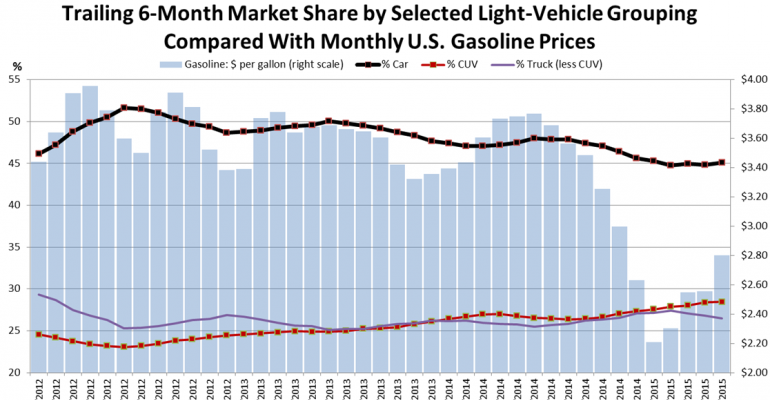 Boosted by stubbornly low fuel prices, demand for CUVs is a major reason for near record-low car penetration, which is likely to get worse.

Burgeoning demand for CUVs, plus the growing number of available models, is virtually turning the segment group into a third light-vehicle type along with cars and trucks.

If current trends continue, U.S. CUV sales will top 5 million units this year, well above 2014’s 4.4 million, and more than double the volume of 10 years ago.

CUV segments run the gamut: small, midsize and large, with a luxury sibling for each one of those sectors. Year-to-date demand for all six segments is running ahead of year-ago, with market share up for all except Large Luxury, which is flat.

A continuation of relatively lower fuel prices, new products and overall growth in the market easily will carry the segment group to new records this year.

In fact, this year will be the second straight that CUVs outsell all other trucks combined. CUV sales so far this year account for 28.7% of the market and the rest of the truck groups equal 26.0%. Cars total 45.3% of sales.

A big spark in CUV growth is several new small-size products just now ramping up or about to, including the Fiat 500X, Honda HR-V, Hyundai Tucson and Mazda CX-3, plus recent additions such as the Chevrolet Trax and Jeep Renegade. Including luxury versions, small CUVs will end the year close to 5% of industry volume, up from 3.4% in 2014.

(Notably, Honda expects demand for the HR-V to rise so fast it already has decided to add sourcing from Japan in the fourth quarter in addition to volume from its new plant in Mexico. General Motors already is dual-sourcing the Trax from Mexico and South Korea.)

Even though the rest of the CUV segments do not have the same degree of fresh product coming this year as does the Small segment, what new or redesigned models that are on the slate mostly will be incremental volume rather than cannibalize competition inside the group.

CUV sales in total are forecast to account for 29.5% of 2015’s LV volume, by far a record, and as long as fuel prices remain agreeable, should climb to over 30% next year. Growth mostly is at the expense of cars.

CUV share already was trending up a year ago before getting a further boost as fuel prices plummeted over the summer and have remained well below last year’s levels. That’s also led to near record-low car penetration, which is likely to get worse.

Excluding the Middle and Luxury Specialty segments, relatively small-volume segments benefiting from new product, such as the Ford Mustang and Lexus RC, sales of midsize, large and luxury sedans are down from last year even though the entire market is up 4.5%. Mostly that’s due to the shift to CUVs.

Somewhat bucking the trend has been the Small Car segment; market share is down but sales are up 1.6%. With more small CUVs hitting the market and fuel prices staying low, the decline in small-car share likely will worsen, with volumes having a tough time staying above water in the second half of the year.