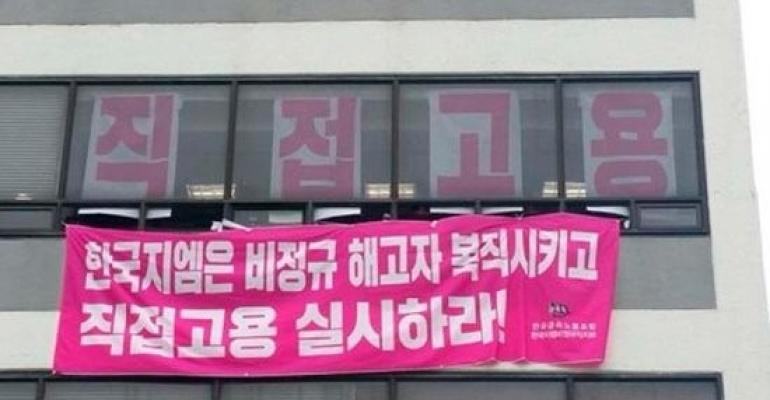 The automaker missed a July 3 deadline to comply with a government order to hire 774 contract workers employed by suppliers at its Changwon plant as regular, fulltime GM Korea workers. It faces a fine of 7.7 billion won ($6.9 million) for failing to comply.

After receiving 7.7 trillion won ($6.9 billion) in fresh internal investments and Korean taxpayer funding that saved it from bankruptcy, GM Korea is under pressure to substantially increase the size of its regular workforce.

Korea’s Ministry of Employment and Labor on May 28 ordered the General Motors subsidiary to hire 774 contract workers employed by suppliers at its Changwon plant as regular, fulltime GM Korea workers.

The company missed a deadline of July 3 to comply. It now faces a fine of 7.7 billion won ($6.9 million) for failing to comply with the order, and remains under orders to hire the workers.

Trying to force compliance with the order, some 40 contract workers have occupied the Bupyeong headquarters office of GM Korea President Kaher Kazem (below, left) since Monday, July 9. The sit-in was continuing Friday, July 13.

Kazem is working from temporary offices while the sit-in continues. A GM Korea spokesman says the company is monitoring the sit-in and will decide soon on taking necessary measures. The 40 protesters represent an umbrella union organization that promotes the interests of the automaker’s contract workers. They seek immediate fulltime regular employment of the 774 Changwon workers, as well as benefits for contract workers who were laid off in April from the now-closed Gunsan plant.

“We believe that the recent (employment and labor ministry) order represents a significant departure from established past practice,” the GM Korea spokesman tells WardsAuto. “We are therefore seeking a solution that addresses our cost competitiveness concerns as we turn around our business to build a long-term sustainable future in Korea.”

The company reportedly has filed a position paper with the ministry stating that increasing its regular workforce would negate cost savings resulting from the May closing of its Gunsan plant in May, as well as paying 2,700 employees who took early retirement.

The paper notes the increase in labor costs would require recalculation of the normalization plan GM Korea submitted to the government when it asked for public funding from the state-controlled Korea Development Bank.

The ministry also is investigating the contract-worker situation at two plants in Bupyeong and may order the company to hire an additional 900 workers there, according to reports.

The contract workers are employed by subcontractors, but do their work in GM Korea plants assembling and installing parts and assemblies. The suppliers pay them a wage almost half that paid to regular workers. They receive none of the benefits regular workers receive under its negotiated labor contract.

Conversion of all of Korea’s contract workers to fulltime status is a major element in the national government’s labor policy, and South Korean President Moon Jae-in was elected on the promise of eliminating all contract-worker jobs in both the private and public sectors.

Under the previous government of conservative President Kim Guen-Hye, the labor ministry had found GM Korea was complying with existing labor law and was not using contract workers to do the work of regular employees.