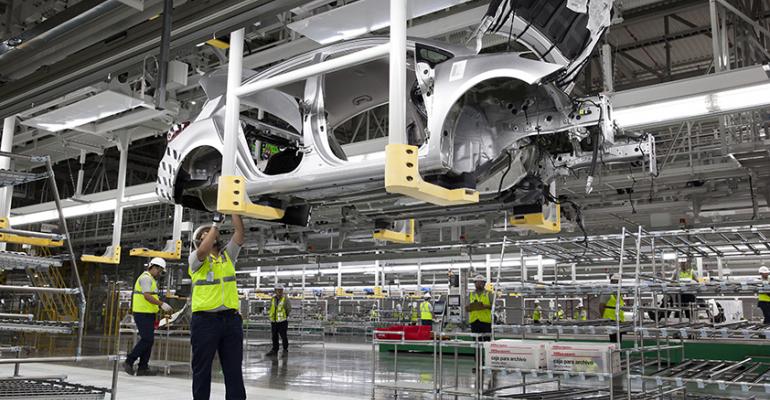 The new operation is expected to launch with its full 300,000-unit-per-year capability. First model off the line will be the Forte/Cerato compact sedan.

Construction and tooling of the plant was completed in just 13 months, the automaker says. Groundbreaking took place in October 2014.

“We are very proud of this great achievement, not only because we have built one of Kia’s largest plants in the world, but also because we did it in record time,” Kia Mexico President Seong-Bae Kim says.

Sources in Mexico say vehicle production will begin in April, which comports with the company’s official statement that testing and pilot production will take about six months.

The new $1 billion facility will launch with full 300,000 vehicles-per-year capability without going through staging, a Kia spokesman tells WardsAuto.

It will provide roughly 10% of Kia's global capacity.

In total, 19 suppliers will provide parts for the Kia operation, 16 of which are “in final phases of construction within the Pesqueria complex, while three suppliers have erected their plants outside of the complex in other regions,” the spokesman says.

Suppliers have not been fully identified, but Hyundai Mobis confirmed earlier it is investing $417 million in an on-site module and lamp plant to supply the new complex. Hyundai Wia also announced an investment of $370 million to build an engine plant that will supply Kia.

Another affiliated company, Hyundai Steel, is constructing a steel service center close by, but the size of the investment has not been disclosed.

The plant itself was engineered by the affiliate Hyundai Engineering.

Initial production at the plant will be devoted to the Forte/Cerato compact sedan.

Plans for other models have not been disclosed. “Specific additional models to be manufactured at the Mexico plant are still under consideration,” the spokesman says. Currently, there are no plans to build Hyundai vehicles at the operation, he adds.

Kia plans to sell 20% of its production in the Mexican market, where it is opening an additional 25 dealerships at a cost of $50 million. This will bring the national total to 46 dealerships, including the 21 launched in 10 major cities in July.

The retail network will give Kia coverage of 85% of the market. Plans call to increase the dealership count to 65 by 2017.

Kia launched domestic sales of imported Forte compact sedans and Sportage and Sorento SUVs in July, selling 1,499 vehicles. October sales ratcheted up to 1,829 units for a cumulative total of 6,659, making it certain the brand will surpass the initial 2015 sales target of 7,000 vehicles.

Next year the imported Kia Optima will be added to the sales mix and the Forte will be sourced from the new plant.

The plant’s big targets are the U.S. and Canada, which are expected to absorb 60% of total production, with the remaining 20% being exported to other markets in the region.

The plant is ultra-high tech, the spokesman says. The body plant, for instance, is fully automated. The stamping plant includes a $75 million, 60-ft. (18.3-m) high, 3,862-ton stamping press, the largest at any Kia facility in the world.

The 27,000 tons of steel used in construction of the plant were sourced from Mexican suppliers, and nine Mexican contractors worked together to build the facility.

About 4,000 Mexican workers have been hired for the assembly and parts operations, and over the longer term Kia expects to generate 14,000 direct and 56,000 indirect jobs in Mexico.