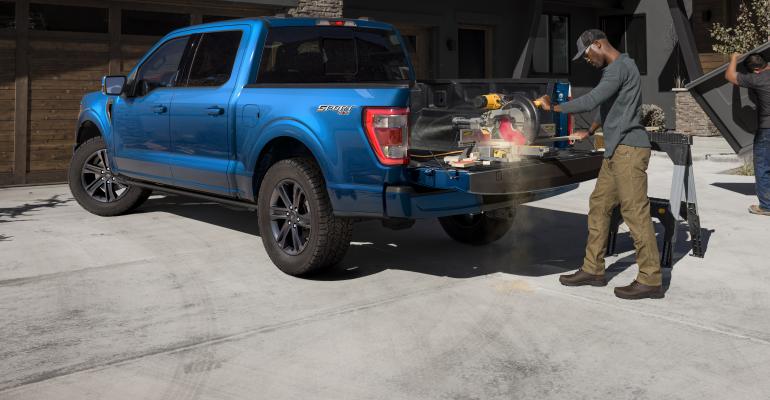 On sale this fall, the redesign of America’s best-selling vehicle will come available in three cab styles, with three beds and in six trim levels with six available engines (including a hybrid), 11 grilles and 13 different aluminum or steel wheels.

An onboard generator to power multiple tools at once, a tailgate work surface and a gear shifter that retracts and stows below a fold-out center console tabletop suggest Ford has engineered its all-new ’21 F-150 fullsize pickup to meet the hard-core needs of contractors spending long days at worksites.

Going on sale this fall, the redesign of America’s best-selling vehicle will come available in three cab styles, with three beds and in six trim levels with six available engines, 11 grilles and 13 different aluminum or steel wheels measuring up to 22 ins.

A number of key metrics are yet to be released for the new truck, such as ratings for horsepower, torque, acceleration and towing. But Ford says the truck will tow at least 12,000 lbs. (5,443 kg). About 80% of fullsize truck owners use their vehicles to tow, the automaker says.

The F-150 will continue to be assembled with an aluminum-alloy body and modified steel box frame at Ford’s plants in Dearborn, MI, and Kansas City (Claycomo), MO. Each plant will close for two weeks for retooling, first at Dearborn in September and then at Kansas City in October, the automaker says. 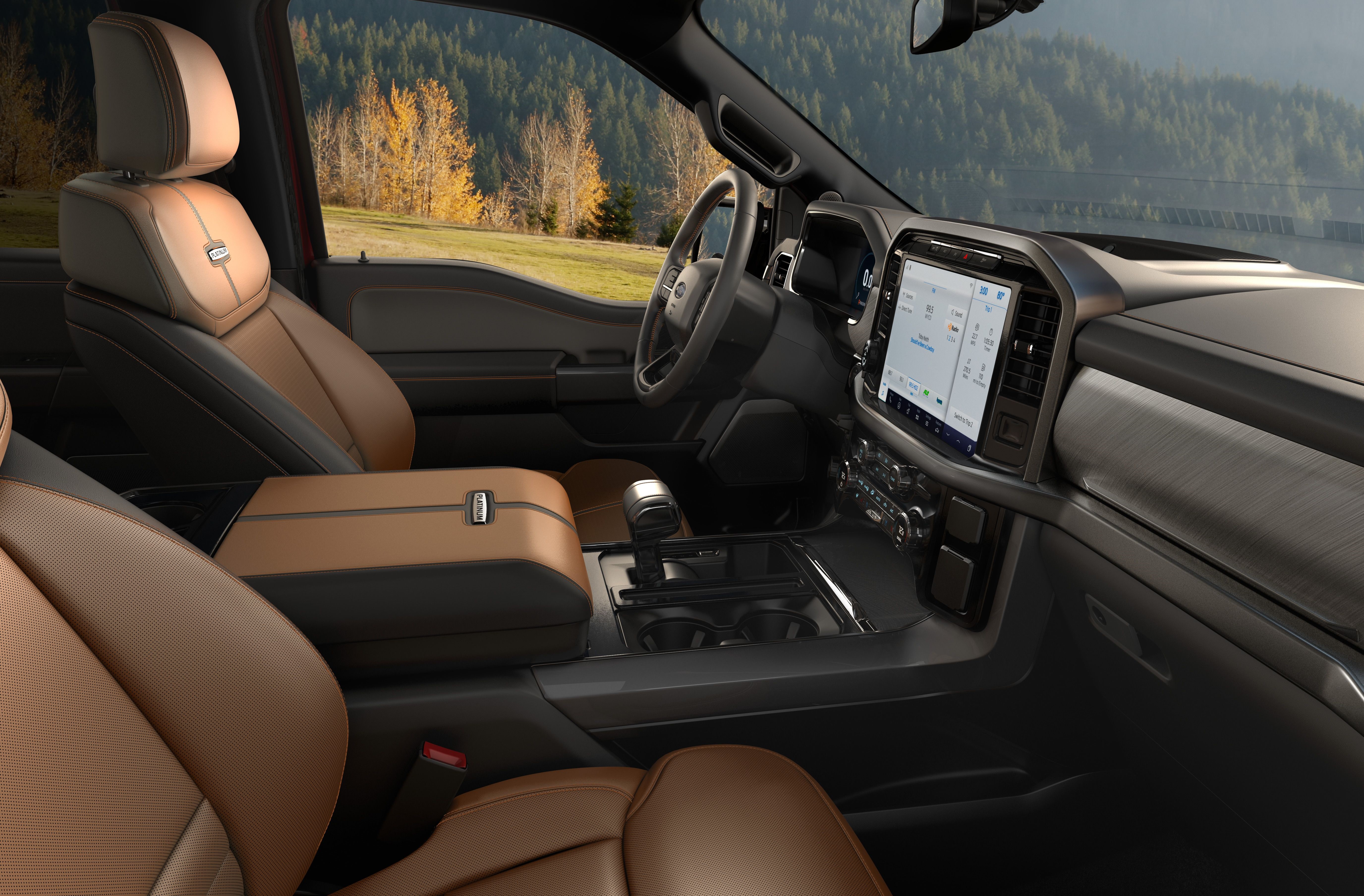 All engines will be available at launch later this year, including the all-new PowerBoost Hybrid, which pairs the 3.5L EcoBoost DOHC twin-turbocharged V-6 with a 35-kW electric motor integrated within the 10-speed automatic transmission to deliver an estimated 700 miles (1,127 km) of range on a single tank of fuel.

Excess energy will be stored in a 1.5-kWh liquid-cooled lithium-ion battery. Ford says the hybrid system, available on every trim level from XL to Limited, is targeted to deliver the most torque and horsepower of any light-duty fullsize pickup.

The automaker expects the PowerBoost hybrid to make up about 10% of sales. When PowerBoost arrives, Ford says the F-150 will be the only light-duty fullsize pickup available as a full hybrid. 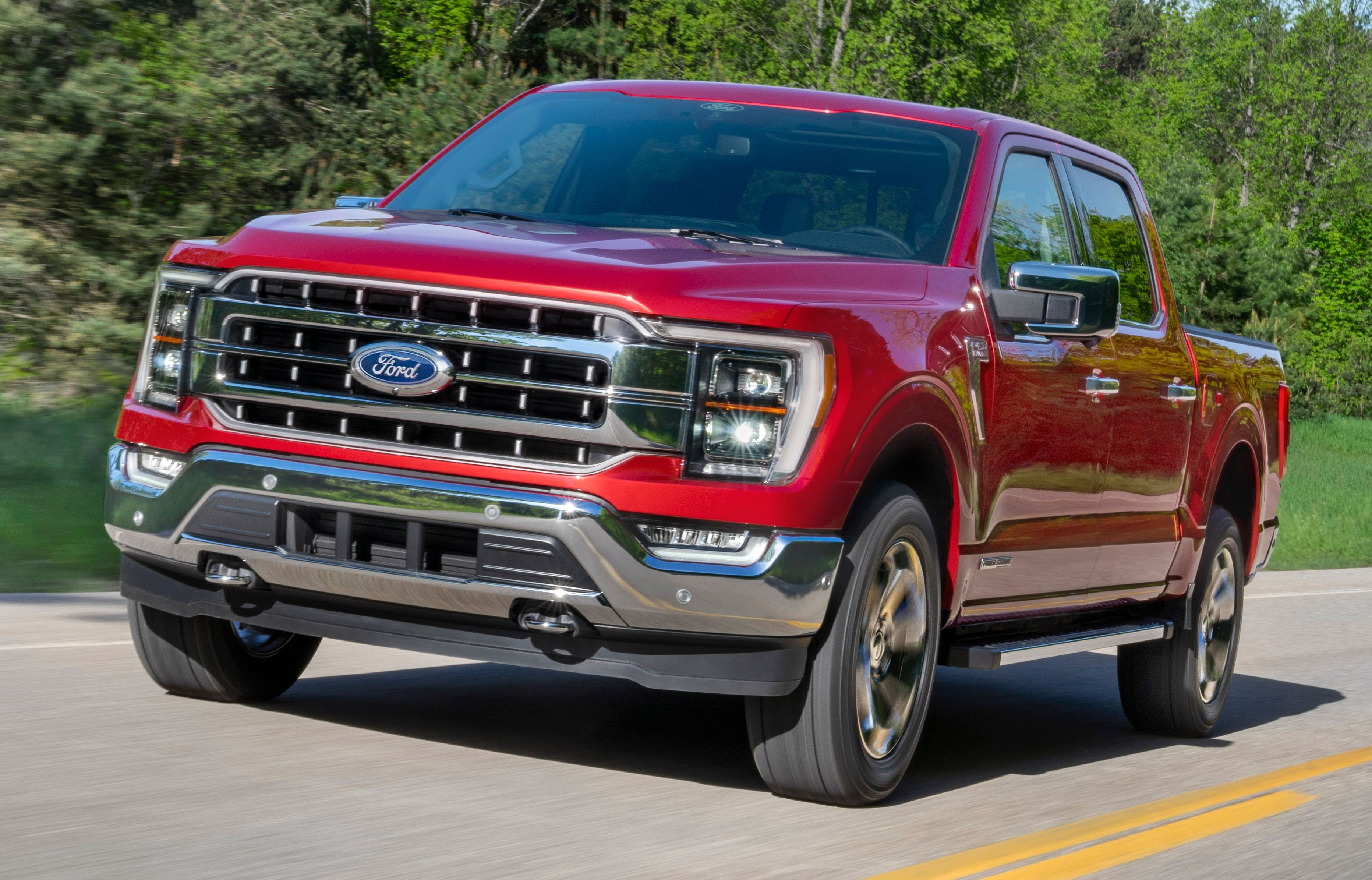 Also new on the powertrain front, the 5.0L V-8 will offer Displacement on Demand cylinder deactivation, which will allow the engine to run on four cylinders in low-load conditions to save fuel. All of the gasoline engines, including the hybrid, will run on regular unleaded.

Beyond hybrids, Ford has plans for a zero-emission F-150. At tonight’s unveiling, Mark LaNeve, Ford’s vice president-U.S. Marketing, Sales and Service, says the battery-electric F-150 will go into production in two years at the Rouge Assembly Plant in Dearborn.

LaNeve says he’s driven prototypes of the truck and was astonished by the instantaneous torque.

From the outside, the F-150 carries over many of the styling cues of the previous truck, namely the “C-clamp” headlights that extend from the grille. The power dome hood is new, as are the wrap-around bumpers, higher front fenders and active grille shutters to reduce fuel consumption. 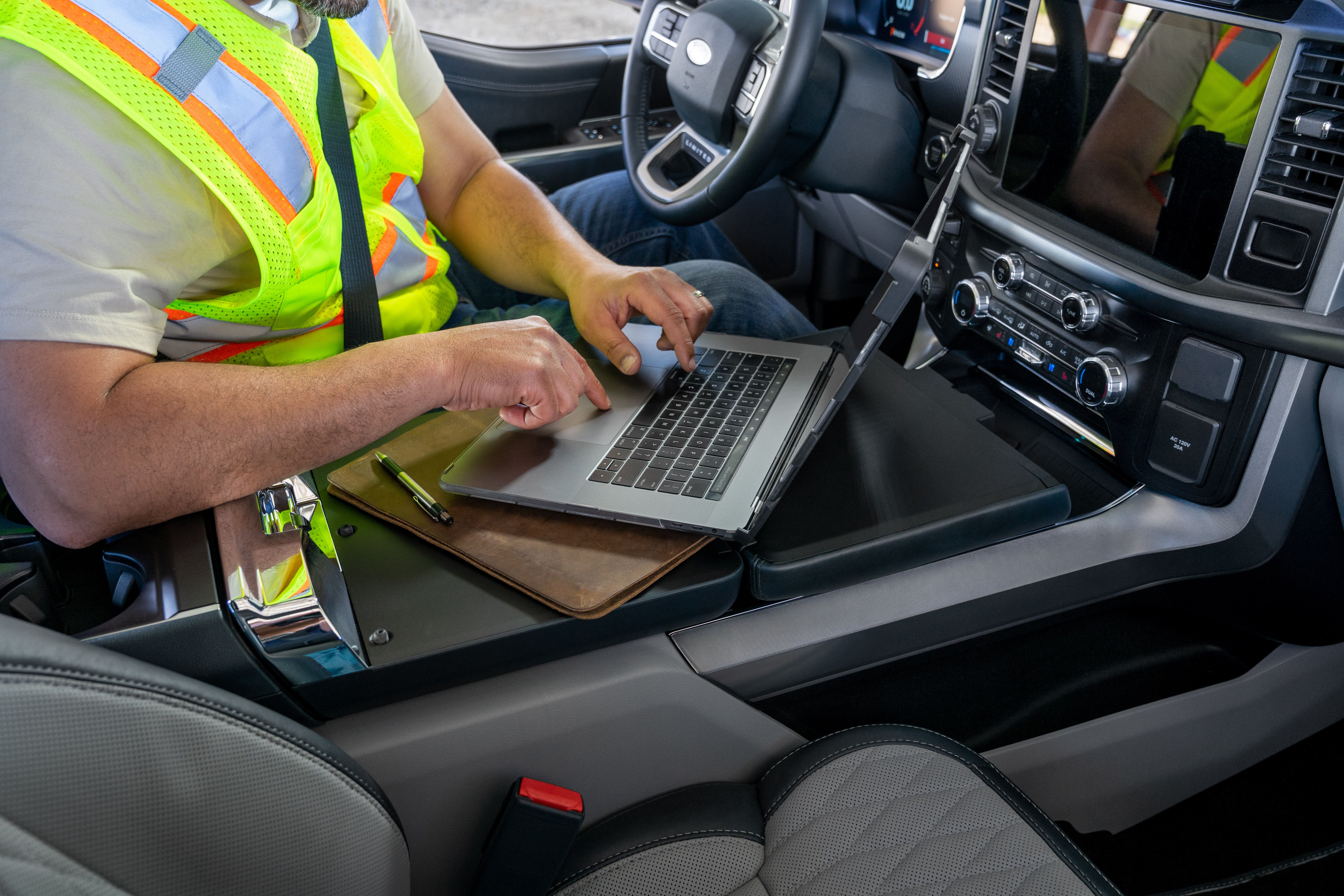 Inside and out, the truck is dripping with new features, such as the power extended running boards that allow easier access to the bed and Trailer Reverse Guidance for simpler maneuvering.

The automaker says it emphasized premium, durable materials in the cabin as well as storage cubbies in both rows, soil-resistant two-tone seats, more color combinations and a standard dual glovebox.

The ’21 F-150 comes with an available 12-in. (30-cm) infotainment center display (standard on XLT high series and above, about 50% of the lineup). The screen is horizontally oriented unlike the tablet-shaped display that proved popular in the Ram 1500 fullsize pickup that launched a few years ago. 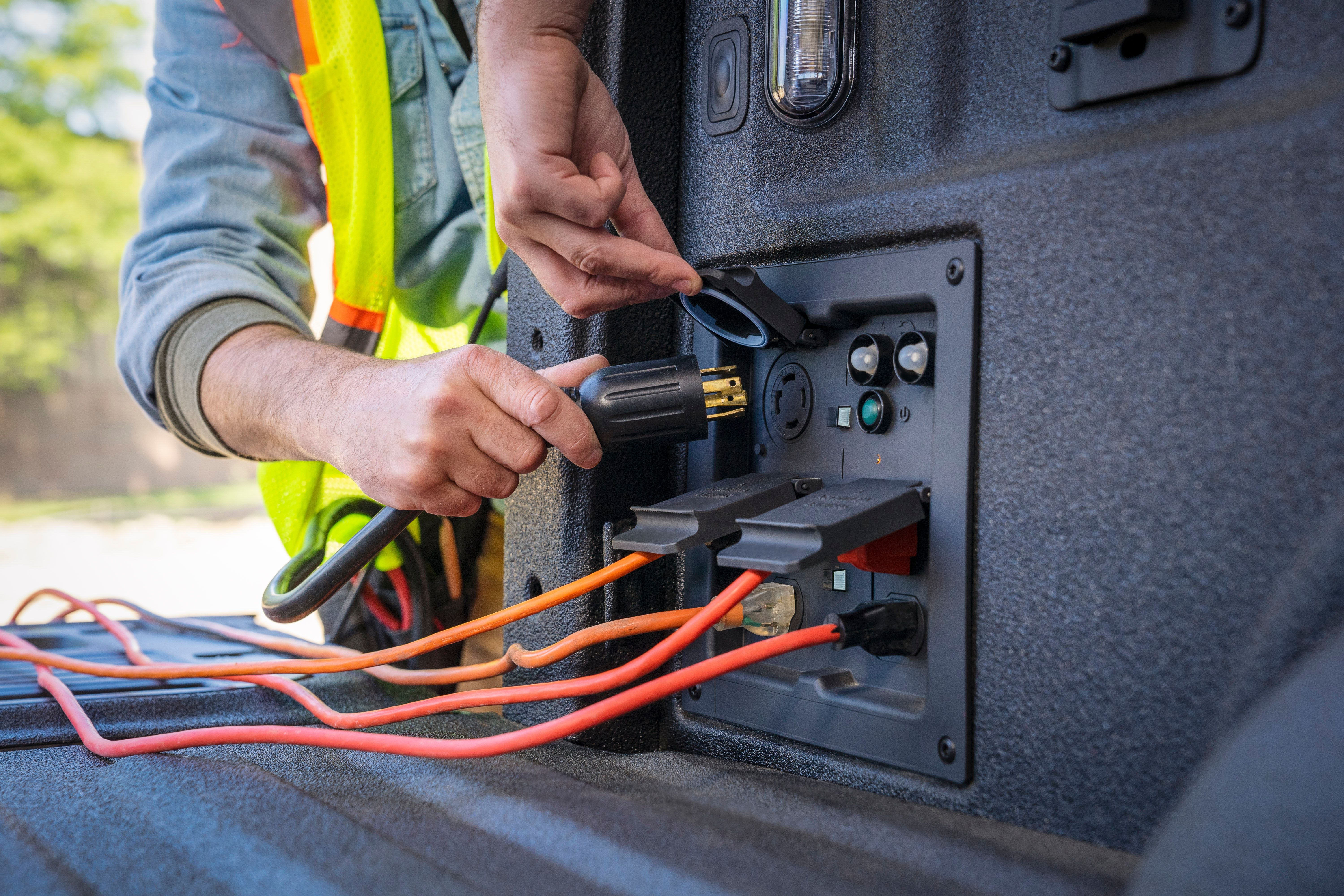 A new 12-in. reconfigurable digital gauge cluster is available and can display – among other information – off-roading data and turn-by-turn navigation. Still, the instrument panel integrates lots of physical buttons in response to customer demand.

Ford bills the F-150 as its “most productive ever” – a mobile office for hard-working customers. Door handles were designed with bigger indentations to accommodate work gloves.

The shift lever is electronic, enabling it to release and fold flat into the center console, neatly beside the cupholder module. A tray then folds out from the center armrest covering the shifter and cupholders in providing a large flat surface for eating, writing or working on a laptop.

Also for the worksite, an integrated generator is available, Pro Power Onboard, with enough juice to power 28 average refrigerators.

The system is available with 2 kW of output from optional gas engines while PowerBoost-equipped hybrid trucks will come standard with 2.4 kW of output or an optional 7.2 kW. Power is accessible through in-cabin outlets and up to four cargo bed-mounted outlets (pictured above).

For contractors who can’t spend enough time at the job site, the F-150’s front seats recline nearly flat, like an airline business-class seat – great for napping or a deep sleep. 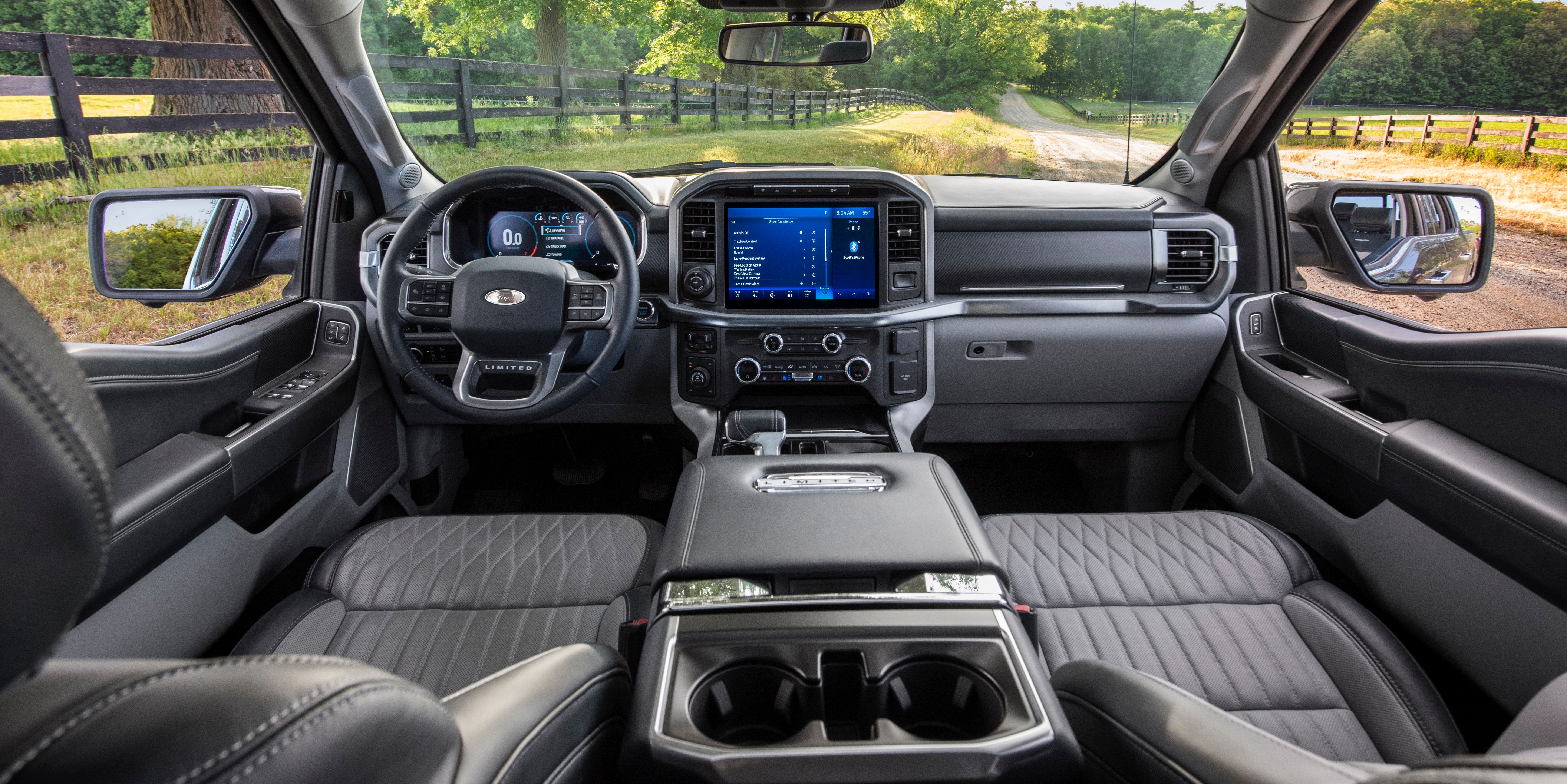 The new F-150 represents a big step on the connectivity front, employing the fourth generation of its SYNC infotainment system with more natural voice control, real-time mapping and wireless integration of Android Auto and Apple CarPlay. Over-the-air software updates will be available, and most can be performed within two minutes, Ford says.

On the safety front, the new F-150 comes loaded with driver-assistance features, such as Pre-Collision Assist with Automatic Emergency Braking and Pedestrian Detection.

Ford says Active Drive Assist will allow hands-free driving on more than 100,000 miles (160,930 km) of divided highways in all 50 states and Canada. Software to enable this functionality – for a fee – is expected to be available through a dealer visit or over-the-air update.

The new truck also instills a sense of pride: an appliqué map of Detroit appears on the door trim of the XLT Sport, and an American flag is etched into each side of the instrument panel, visible every time the door opens. 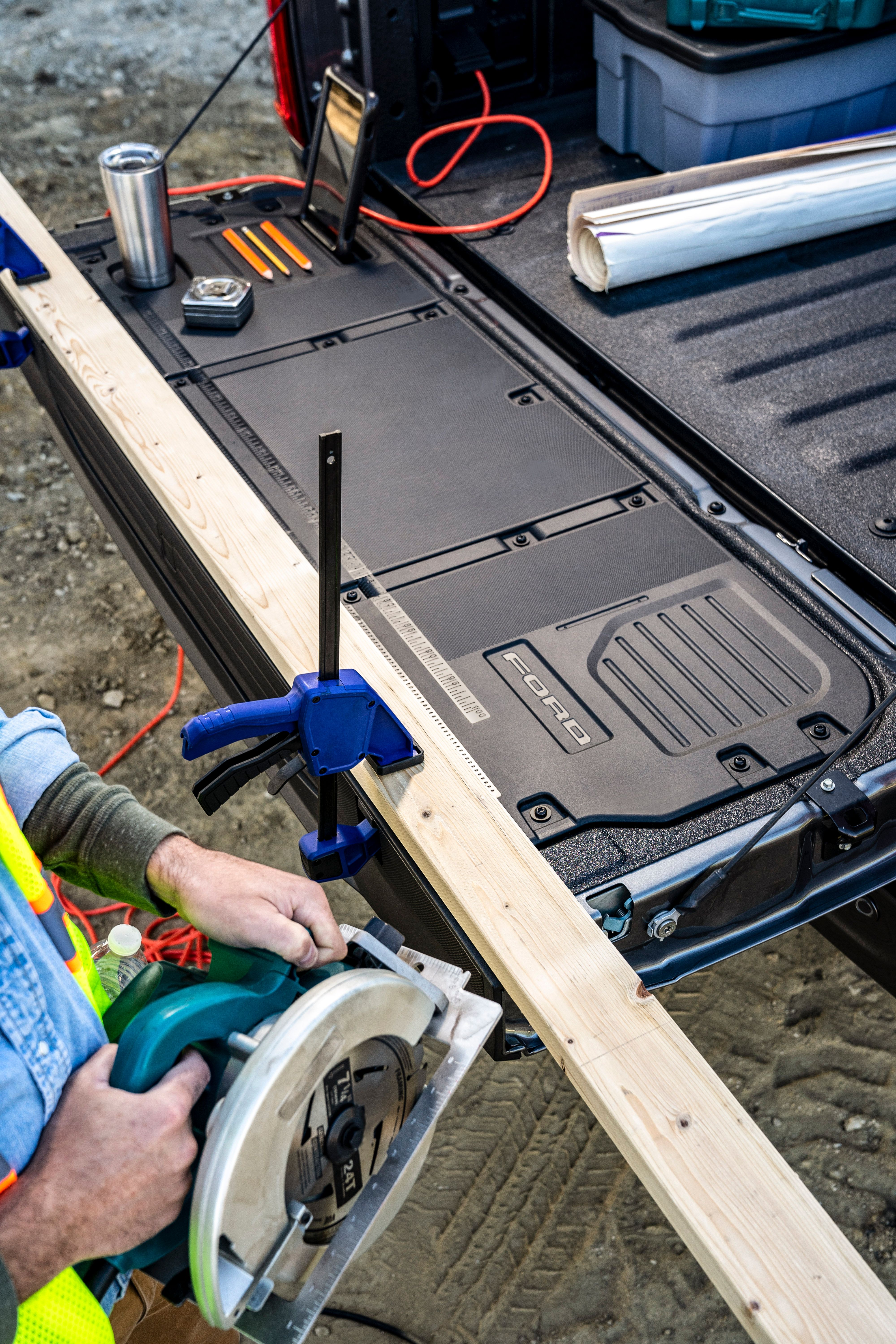