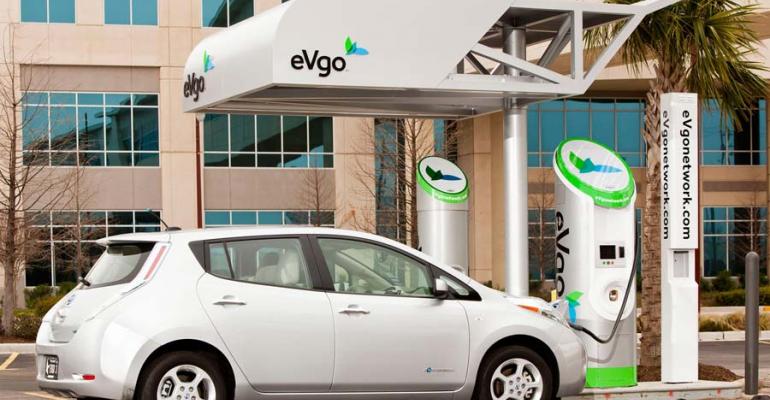 Enabling car owners to recharge at work is seen as a way to spike interest in EVs. Nissan alone plans to drive installation of some 500 public stations in the next six months.

WASHINGTON – Government and industry partner at Washington auto show to kick off programs for the proliferation of fast-charging stations for electric vehicles and plug-in hybrids.

The target is to increase recharging stations tenfold in the next five years, Chu says.

In a separate announcement, Nissan says it is seeking to relieve its Leaf buyers of range anxiety. It is initiating a program to install at least 500 quick-charge stations nationwide in the next 18 months.

Most EV owners now rely on home charging and don’t have an opportunity to plug in their cars at work or elsewhere, says Brendan Jones, director-EV marketing and sales strategy for Nissan.

“We envision a quick-charging network that links communities and neighborhoods where people live, work and socialize,” Jones says. “Having a robust charging infrastructure helps build range confidence, which boosts interest in and use of electric vehicles.”

Nissan has sold 50,000 Leafs globally, including 20,000 in the U.S. The company recently announced a steep price cut for a base-model Leaf. With tax rebates, buyers in California could purchase the EV for less than $19,000, the auto maker says.

“We need to amp up the recharging infrastructure,” Jones says, adding there are about 1,500 private charging stations at workplaces in the U.S. today.

“Customers want more range,” he says. “We need to build range confidence in all our customers.

Part of Nissan's plan calls for installing 30 fast chargers in a test program at a select group of its dealerships across the country.

A total of 500 public stations will be installed in the next six months with the assistance of NRG Energy and its eVgo network.

NRG now has fast-charger networks in Houston and the Dallas/Fort Worth area. In addition to setting up a network here in Washington, NRG plans charging stations in San Francisco, Los Angeles, San Diego and the San Joaquin Valley in California.