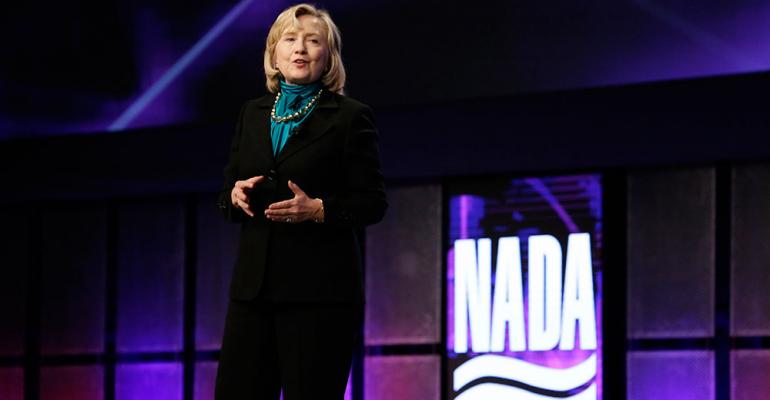 The former Secretary of State remains unsure about a 2016 presidential bid. &ldquo;Let&rsquo;s solve the problems we have now as elected officials,&rdquo; she tells the dealer group. &ldquo;We can worry about the next election later.&rdquo; &nbsp;

NEW ORLEANS – Hillary Clinton, in an address to the 2014 NADA Convention and Exposition here, stays clear of political issues that might hit too-close to home for a dealer audience that tends to lean in a different ideological direction.

A controversial keynoter – some dealers expressed opposition to her appearance here ahead of the convention, Clinton is warmly received by the audience that skews Republican, but still gives her standing ovations before and after her remarks.

Clinton stays away from commenting on controversy surrounding dealer loan-origination fees, the hottest topic here. But she does explain why as a Senator she decided four years ago to support the auto industry bailout, which saw many dealers lose their stores as a part of the General Motors and Chrysler bankruptcies.

And she tells outgoing NADA Chairman David Westcott in an on-stage chat after her speech that she remains undecided about a presidential bid in 2016. She also praises GM’s move to name a woman CEO.

She acknowledges some dealers had their franchises taken away and many other people in the industry lost jobs, but says, “Overall I believe it was positive. And with the way you are coming back, I hope we’re on firmer ground.”

Dealers, she says, have shown resilience throughout the economic crisis and have been a big reason for the country’s rise out of the recession.

As for a presidential bid, Clinton says that decision can wait.

“It’s not a very satisfactory answer, but let’s solve the problems we have now as elected officials,” she tells the dealer group on the convention’s last day. “We can worry about the next election later.

“I’m not thinking about it,” she adds. “I try to get others not to think about it. I’ll think about it at another time. Let’s do what we can do now to build on (our country’s) success.”

Clinton tells dealers she is both excited and pleased with the appointment of Mary Barra to CEO at GM.

“We have had a lot of women in the corporate pipeline working in industries for a long time and they are finally in a position to be given an opportunity of leadership,” she says. “It sends a good (message) to little girls and little boys that we don’t have a person to waste.”

Clinton also praises the auto industry for leading an export drive in the U.S., and points to a GM manufacturing operation in Uzbekistan she once visited, saying it “lifted my spirits to see one of the great American companies planting a flag in Central Asia.”

Asked whether she would like any do-overs, Clinton points to Benghazi, where four Americans lost their lives during a controversial attack on the U.S. embassy, including two from the diplomatic corps she oversaw as Secretary of State under President Obama.

“You make choices based on information (you have),” she says. “But there are always unexpected twists and turns.

“It illustrates the biggest problem I faced as Secretary of State,” she adds. “There are a lot of dangerous places we send (Americans).”

In lighter moments, Clinton describes cars she once owned. Her first was a ’63 Oldsmobile Cutlass she purchased for $220 to take her to college. She had trouble with it starting in during Chicago winters, so she would disconnect the battery, put it in her backpack and take it to her room each night so it would stay warm.

The Cutlass gave way to a yellow Fiat, that ultimately was stolen and wrecked. “The police told me it had been involved in a high-speed chase,” she says. “I could never get that car to go fast. So I was proud of the way it performed before it died its tragic death.”

Clinton says she last drove a car in 1996. “I remember it well,” she says of that final drive. “So does the Secret Service.”

Steve Forbes Hits All the Right Notes in Talk to Dealers
Jan 26, 2014