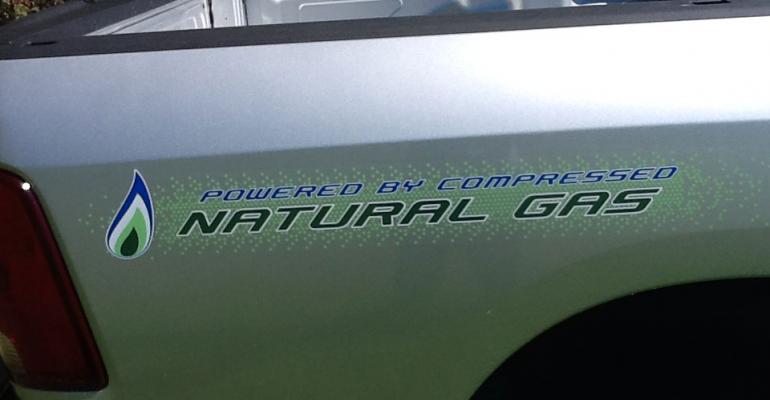 The heavy-duty Ram 2500 pickup is first in the lineup to get CNG fueling capability, but other Chrysler vehicles are being considered.

TRAVERSE CITY, MI – Chrysler expands its portfolio of alternative powertrains with a new compressed-natural-gas version of the heavy-duty ’12 Ram 2500 going on sale this month for fleet customers.

On display at the Center for Automotive Research’s Management Briefing Seminars here, the truck comes packed with two 3,600-psi (248-bar), 130L (34-gallon) tanks in its flatbed, which eats some space.

There are separate fuel injectors for unleaded gasoline and CNG. Because natural gas is a drier fuel, Chrysler had to change valves and valve seats.

For the Ram, the engine is designed to use its CNG supply first before the gasoline. There is a failsafe that switches to gasoline in case the natural gas ages out, but CNG has a very long shelf life, a top Chrysler executive says.

“It takes 14.5 L (3.8 gallons) of CNG to do the work of 1.0 L of gasoline,” says Bob Lee, Chrysler vice president-engine and electrified propulsion engineering.

The Ram was chosen for CNG adaptation because Chrysler is looking to boost its fleet sales among fuel-conscious customers who make long, frequent trips. Lee says builders of CNG fueling stations also are staying extremely busy in expanding the infrastructure.

Chrysler representatives decline to reveal if the technology will be used in additional vehicles. However, research and development in using CNG in other models is under way. Chrysler’s parent, Fiat, uses CNG extensively in European models.

“We have access to those things that have been done, but we wanted to do something here that proves a good business case,” Lee says. But “if someone makes the case for the Pentastar, we can do it,” he says, referring to a potential CNG version of the U.S.-built V-6.

For a time, Chrysler produced propane-powered vehicles, a strategy the auto maker isn’t considering again. “Natural gas is more widely available than propane, and the cost is less,” Lee says.

Research also centers on potentially repositioning the fuel tanks, which must remain cylindrical. “My preference would be to take the void spaces, like the frame rails, and fill them with gas,” Lee says.

On the downside, the CNG Ram can tow 7,650 lbs. (3,470 kg), while a comparable gasoline-powered truck can pull 10,400 lbs. (4,717 kg). Payload also is lower for the CNG truck. Chrysler says the modified vehicle is geared for a crew and tools rather than hauling heavy equipment.