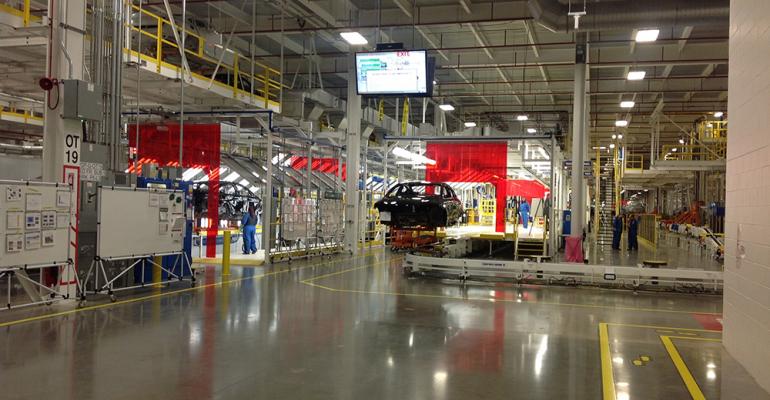 Auto-adjusting inspection lighting, a new type of conveyer system and recaptured air for spray booths are some of the innovations at the automaker&rsquo;s remade Detroit-area assembly plant.

Paint shops have become a key focus point for automakers, as increasingly stringent environmental emissions’ regulations, coupled with consumer expectations of a pristine finish on their vehicles, bring about sharp changes in methodologies and equipment.

The nearly 1 million-sq.-foot (92,903-sq.-m) shop is double the size of the one it replaced and has several innovations for Chrysler and North American auto plants.

Not only is it more energy efficient than the lighting in the old paint shop, it uses a camera to sense the color of a body entering an inspection booth, adjusting brighter for darker colors to unmask imperfections that can be hidden in poor light.

Volkswagen uses a similar system at its Audi plant in Neckarslum, Germany, home of the R8 sports car.

The adjustable lighting improves Chrysler’s “ability to identify defects that might be there, (and) there’s no (eye) fatigue on the operator,” Tyree Minner, Sterling Heights Assembly plant manager, tells media here during a tour.

Sedan bodies move through the various coating and painting stages and onto general assembly via 8 miles (13 km) of floor-mounted friction-driven conveyers, another North American-first.

Most paint shops use a chain-driven conveyer, which can track oil and paint chips throughout the plant.

“We don’t have chain, (so) we reduce the dirt and contamination going through the whole shop,” says Chris Kulka, paint-shop project manager.

He says the friction-drive system from supplier Jervis B. Webb uses smaller electric motors than a typical chain-driven line, and they only turn on when needed, another power-saving win for the automaker.

Multiple carriers can be connected together and pushed via a load bar with a single drive, also saving energy.

“If I have a problem with the drive…we come over with our (skilled) trades, unplug it, disconnect it and then plug in a new one,” he says.

More energy savings are realized in the spray booths, which capture air that would have been exhausted, instead of heating and humidifying air pulled in from outside.

“So we’re only utilizing enough energy to heat and use what is already in the facility,” says Eric Boewe, process reliability manager for Chrysler. “And the only air that is brought into the facility is that for our floor process areas, and then we take it and reutilize it.”

Chrysler also says zero volatile organic compounds are emitted, thanks to use of powder paints.

The 200’s powder primer, from PPG, is reusable, with unused material vacuumed up, cleaned and mixed with virgin powder, then reapplied to the underside of a vehicle body.

Boewe says the powder primer, which Chrysler reportedly has been using since the ’95 Neon small car but now is organic in nature, is less likely to chip than a liquid primer. For evidence, he points to a photo showing a stone dent on a body panel, which left an indentation in the sheetmetal but didn’t damage the paint.

In the Sterling Heights’ shop’s three spray booths, 68 robots hang from the top of a wall near the ceiling, spraying a waterborne basecoat and PPG’s 2K clearcoat.

“Where the normal process may be to put (robotic sprayers) on a pedestal on the floor and reach them out and around, by hanging them on the ceiling we reduce the amount of contamination not only in the booth but on the vehicle,” Boewe says.

The large booths have windows that open, allowing robots to be serviced easily.

“I don’t have to shut the booth down to do any work on the applicator or atomize it, we can (just) bring the robot to the window,” he says.

Paint is not wasted thanks to a cartridge system that loads only the amount necessary for each body.

In total, the shop can paint up to 14 different colors including tri-coats, Minner says.

Some 256 direct and 71 indirect employees work at the new SHAP paint shop, he says, noting 30 are salaried.