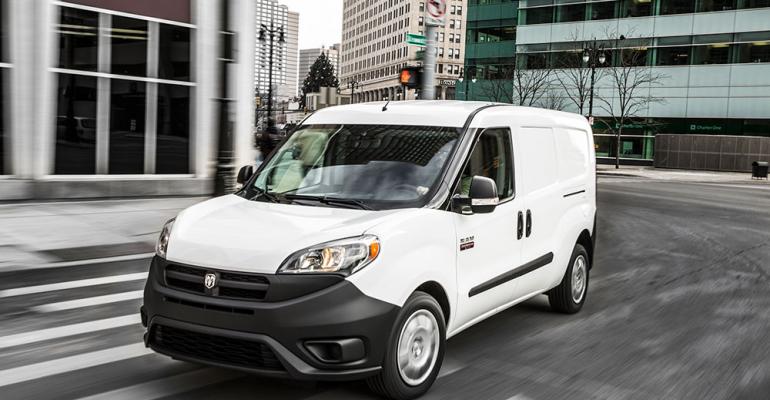 Although the new ProMaster City shares much with the Fiat Doblo, Chrysler was able to inject some Ram DNA into the small van&rsquo;s front fascia, and the brand&rsquo;s strong influence is evident in the design of the vehicle&rsquo;s interior as well.

Chrysler’s fledgling Ram brand looks to build on its sales success by way of an expanded lineup of commercial vehicles, as it officially unveils new ProMaster City passenger and cargo vans later today at its Chelsea, MI, proving grounds.

Based on a re-engineered third generation of Fiat’s successful Doblo van, which has sold more than 1.3 million copies worldwide, the ProMaster City models will be powered by Chrysler’s Tigershark 2.4L 24-valve MultiAir2 4-cyl. engine, mated to the automaker’s new 9-speed automatic transmission that debuted in the Jeep Cherokee.

The new City Tradesman commercial version replaces the current Ram Cargo Van that is based on Chrysler’s minivan architecture and will be phased out at the end of the ’16 model year, according to WardsAuto forecast data.

Although the new vans share much with the Fiat model, Chrysler was able to inject some Ram DNA into the City’s front fascia, and the brand’s strong influence is evident in the design of the vehicle’s interior, which will carry over to the new Doblo.

The front-drive City features sliding side doors and 60/40 split-swing rear cargo doors. The passenger model, which seats five, including the 60/40 tumble-and-fold seat mounted midship, gets glass in the side and rear doors. Cargo models can be purchased with or without the glass.

The ProMaster City gets a MacPherson strut suspension up front and incorporates an independent bi-link rear suspension, not the leaf springs typical in this class. Ride height has been increased 0.4 ins. (10 mm) over the Doblo’s to accommodate rougher American roads.

The highly sculpted instrument panel’s center stack is designed around Chrysler’s now ubiquitous infotainment display screen and there are redundant accessory controls surrounding the van’s amply sized steering wheel. The automaker’s Uconnect system with voice activation also is included. There’s a full-width overhead storage compartment and numerous cubbies along and around the dashboard.

Chrysler’s Mopar operation has developed more than 60 aftermarket accessories for the ProMaster City that allows buyers to customize their vans with such things as roof racks, towing equipment and special seat covers and floor mats.

Ram executives say the City Wagon passenger model could attract some personal-use buyers, but with only two trim levels and limited amenities, most retail customers are more likely to opt for a traditional minivan. Sales are expected to skew 90% to the Tradesman cargo model.

The Tigershark 4-cyl. will be the only engine offered in the Ram models for now, though a 2.0L diesel that will be offered in the new Doblo is “available to us,” notes Robert J. Hegbloom, director-Ram brand.

The City/Doblo will be built at Fiat’s plant in Bursa, Turkey. The U.S.-bound vans will be imported in passenger-vehicle dress and then converted to cargo models to dodge the so-called “chicken tax” 25% import tariff on trucks. Chrysler officials say they are working with U.S. Customs to ensure the trucks are brought in “under the letter and spirit” of the law.

The expanded lineup will give Ram more ammo to continue its fairly spectacular market growth since the brand was spun off from Dodge in 2009.

Hegbloom says the commercial-van segment represents a 380,000-unit industry in the U.S., including models from Classes 1-4. Class 1, where the new unibody City resides, accounts for about 20% of that mix, but Chrysler sees industry volume rising in that sector to 100,000 units in 2015.

Industry-watchers were taken by surprise four years ago, when Chrysler announced it would pluck its fullsize pickup line from the Dodge stable and use it to seed a new stand-alone brand called Ram.

But Hegbloom tells WardsAuto there never was any hesitation internally, and by most measures the strategy has paid off for the Detroit-based automaker. Ram sales in North America grew 19% last year to 463,000 units and jumped another 22% in first-quarter 2014.

The move to launch Ram has allowed Chrysler to focus on the specific needs of truck buyers and “build an energetic team” for the brand, Hegbloom says. “It’s allowed Ram to move forward, and Dodge too.”

In its 5-year business plan released last month, Fiat-Chrysler forecast Ram sales to grow 34% in North America to 620,000 units annually by 2018. The brand plans a major refresh of its light-duty trucks in 2017, followed a year later by an update of its heavy-duty models.

The sales and service pieces also are now in place for Ram to make a bigger splash in the commercial-vehicle market, Hegbloom notes, with the brand having grown from 400 to 450 dealers selling to the commercial markets to 850. That group has 90% coverage of the market within a 30-mile (48-km) radius, he says.