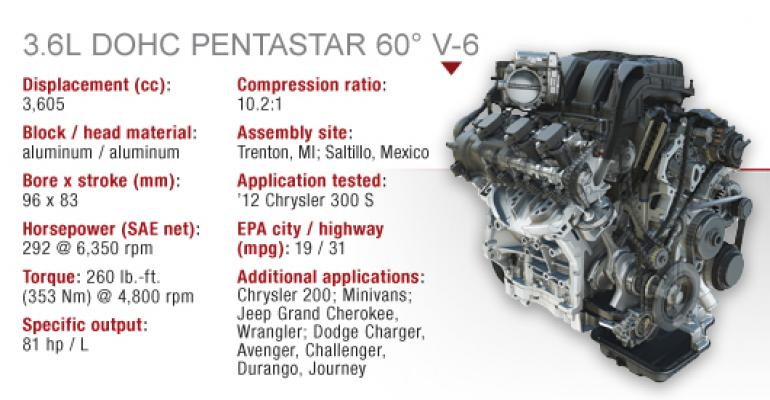 The Pentastar returns to the Ward&rsquo;s 10 Best Engines list for the second year in a row after impressing editors in two disparate applications: Chrysler&rsquo;s flagship 300S sedan and Jeep Wrangler SUV.

In past years, premium naturally aspirated V-6s new to the market engaged in a veritable slugfest for recognition on the Ward’s 10 Best Engines list. The high-water mark came in 2008, when four such engines from Honda, Lexus, Cadillac and Infiniti made the cut.

This year, only four premium V-6s were in the competition, suggesting auto makers are dedicating their resources to smaller engines and alternative powertrains.

Thankfully, Chrysler management years ago saw a need for a world-class, all-purpose V-6 that would be affordable, fuel-efficient, powerful, smooth and flexible enough to replace seven outdated engines across a broad swath of the auto maker’s portfolio.

That engine is the DOHC Pentastar, which returns to the Ward’s 10 Best Engines list for the second year in a row after impressing editors in two disparate applications: Chrysler’s flagship 300S fullsize sedan and the 4-door Jeep Wrangler SUV.

Credit much of the improvement to Chrysler’s excellent new 8-speed automatic transmission, which allows the shift schedule to be optimized for fuel economy.

Beyond that, the Pentastar’s key attributes carry forward, from its variable valve-timing system and 10.2:1 compression ratio to its tried-and-true multi-port fuel injection system.

Chrysler thought about using direct injection, which appears in most new engine programs, and it would have resulted in more power. But the auto maker proves the Pentastar can be stellar without the technology, while being less expensive to manufacture and more competitively priced in the showroom.

But even though the Hyundai V-6 is more powerful on paper with 333 hp, it doesn’t feel any faster in real-world driving. In this instance, direct injection seems to make no difference at all.

Not to be overlooked is how the Pentastar transforms the drive experience in the Jeep Wrangler. Its customer base can be described as rabid loyalists, and they should quickly recognize the huge step forward by replacing an outdated 3.8L V-6 with the grunty, trail-ready Pentastar.

Retrofitting the new V-6 into the pre-existing Wrangler architecture was tough. The accessory drive had to be repositioned due to packaging constraints, and the intake manifold had to be completely re-engineered, which required significant recalibration.

The next Chrysler engine bay to receive the Pentastar is the Ram 1500 pickup. The upgrade comes later in 2012, but engineers say only minor adaptations are necessary to fit the V-6 under its hood.

From pickups and Jeeps to minivans and flagship sedans, the Pentastar will drive Chrysler well into the future.