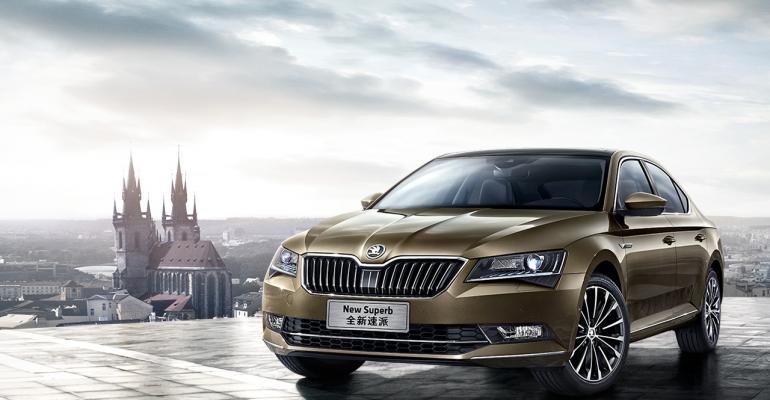 Skoda&rsquo;s lineup of mostly small, fuel-efficient cars is catching on in China as the economy cools down. The automaker&rsquo;s 281,707 sales in China in 2015 accounted for more than one-quarter of the brand&rsquo;s 1.055 million global deliveries.

The European manufacturer aims to double its Chinese sales once the deal is completed, Skoda China President Andreas Hafemann tells WardsAuto. Tomas Kubik, a spokesman for Skoda headquarters in Prague, says the automaker wants to meet this goal by 2020.

To achieve this, the company wants to develop Skoda’s model range in the world’s largest auto market, having signed a memorandum of understanding with VW and SAIC during a state visit by Chinese President Xi Jinping to the Czech Republic in late March.

Acknowledging China is going through a transition period during which an economic slowdown is the “new normal,” Hafemann says he expects to see weaker growth in overall demand within China’s auto market, but he is confident of sales growth for his marque.

Chinese motorists seem keen to buy small, fuel-efficient Skoda cars as the economy starts to slow. The automaker reports selling 281,707 vehicles in China in 2015, up only 0.1% from prior-year, but still accounting for more than one-quarter of the brand’s 1.055 million global deliveries.

Also, last year Skoda produced more than 268,000 vehicles in China, according to its latest annual report, which means the manufacturer built more cars in the country than it sold there.

Skoda has four plants in China and currently sells six locally made models in the country: the New Fabia, Octavia, Superb, Yeti, Rapid Spaceback and Rapid. Only the Yeti is an SUV; with the new investment Skoda intends to leverage utilities’ growing popularity by adding production of those vehicles within China.

Jiri Simara, an analyst with Czech company Cyrrus, notes these larger vehicles already are popular in China and demand for them is growing faster than for other vehicle types.

Skoda already is working with SAIC on a SUV campaign in China, including displaying its concept Skoda VisionS to the Beijing auto show that runs until May 4. The VisionS, a 6-seater SUV bigger than the Yeti, was unveiled in March at the Geneva auto show.

Skoda says the production version of the VisionS is planned to reach the Chinese market in first-half of 2017, and another large Skoda SUV also targeted at China already is in development. The new Skoda vehicles also will be manufactured by SAIC, which has six facilities in Shanghai; Nanjing and Yizheng, both in Jiangsu province; Ningbo in Zhejiang province; Urumqi in Xinjiang; and Changsha in Hunan province.

“These young people are the major SUV buyers as they pursue diversities to show their individualities. They also require more space as China now allows two children in a family,” he says in reference to the October 2015 termination of China’s one-child policy designed to limit population growth.

Chinese consumers in March bought 698,791 SUVs, up 44.4% year-on-year, compared with 12.3% increase for minivans and a decline of 3.5% for sedans, according to the Beijing-based China Association of Automobile Manufacturers

Despite the drop in car sales, Skoda is confident enough to plan a launch this May of a modified Octavia, a family car that is the brand’s best-selling model in China.

Analyst Simara describes the SAIC-Skoda agreement as strategic: “Thanks to that, Skoda Auto can start expanding its model range in the country and the modernization of its production capacities…If Skoda Auto wants to boost its global importance, it has no choice but to increase its footprint in China.”

But the brand has work to do. Although China is Skoda’s largest single market, its share is slightly above 1% and consumer awareness is low, Simara says. “I personally consider Skoda Auto’s aim to double its market share within four years as a fairly realistic goal,” he adds.

The Skoda-SAIC partnership will include developing electric vehicles for the Chinese market and boosting the connectivity of Skoda cars to the Internet, digitizing in-car services such as sensor-based automatic braking and navigation services.

“With the investment, we’ll be strengthening our brand’s presence in the Chinese market,” Skoda China President Hafemann says. “In the coming years, we’ll rapidly expand Skoda’s offering to include forward-looking vehicle concepts and modern technology.”

“The investment is a strong signal for the future research and development of new vehicle concepts and environmentally friendly technologies in China. The agreement between the partners is an important step towards the future.”

– with Martina Marečková in Prague