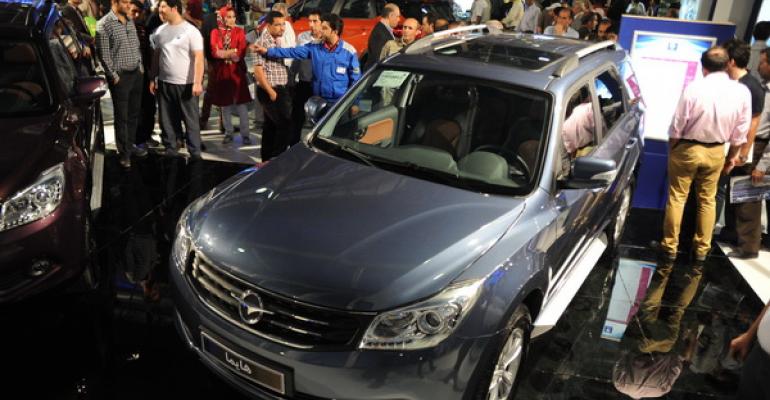 With the lifting of sanctions against Iran in exchange for curtailing its nuclear program, Chinese automakers will face more competition as other foreign companies step up production in the country, increase imports, or both.

VIENNA – Chinese automakers used the period of international sanctions against Iran to establish themselves in the country with the help of local assemblers.

With the lifting of sanctions against Iran in exchange for curtailing its nuclear program, a deal still awaiting ratification by the U.S. Senate, Chinese automakers will face more competition as other foreign companies step up production in the country, increase imports, or both.

The Chinese automakers improved their position in Iran with new and affordable models when many imported cars were too expensive and some foreign brands were not available.

“Most of the clients who were planning to buy Chinese cars have abandoned their plans and are waiting to see at what rates the European cars will be offered to the Iranian market and whether they can afford them,” Iran’s Mehr news agency reports.

Chinese cars still have a price advantage over their European rivals in terms of prices, but many Iranian consumers think Chinese products are low quality.

Recently an Iranian television station asked its viewers an intriguing question: If Iranian automakers are looking for foreign partners, companies from which of the following countries should be given priority: Germany, China, Japan, Korea or France?

Hashem Yekehzare, President and CEO of Iran Khodro, Iran’s largest vehicle maker, says the presence of foreign automakers in the country poses a great danger for Chinese companies. “Chinese cars may seem attractive because of their reasonable prices, but they cannot compete at all with European cars in terms of quality and technical features,” Yekehzare says at a press conference in Tehran.

Chinese automakers must reduce their prices up to 20% “if they are to adequately incentivize Iranians away from more-loved European brands,” Sasan Ghorbani, secretary-general of the Iranian supplier association IAPMA and president of parts supplier Tisser, told the IRNA news agency in April.

While some buyers are expected to switch to non-Chinese brands when new offerings arrive, Chinese manufacturers and their Iranian partners are not giving up and they are making efforts to improve their position with new models.

The Kerman company is pursuing a branding strategy. While all Chery models assembled by MVM currently wear the Iranian brand, the company will introduce the locally built Chery Tiggo 5 SUV badged as a Chery for the first time.

‟MVM has a significant market share and has created more than 3,000 direct and 10,000 indirect jobs,” Amir Hossein Amiri, the company’s head of sales and marketing, says in a statement. ‟Now it is planned to produce some Chery products at MVM and to launch them with the Chery brand at MVM’s dealerships.”

On the other side, Rayen for the first time is offering a car under its own brand: the Rayen V5 small sedan, a rebadged Chinese FAW Tianjin Weizhi V5, unveiled at the Shiraz auto show in June.

To reduce its dependence on Chinese cars, companies of the Kerman group, which assembled Daewoo, Hyundai and Volkswagen cars in the past, are talking with automakers from a variety of countries. In a meeting with officials from the city of Bam, Hamid Zamani, Rayen’s vice president, confirmed negotiations with Korean, Japanese and German partners were under way and said next year will see a wider range products. Kerman assembled VW cars in Bam before the U.S.-led imposition of sanctions the previous decade.

Zamyad, another subsidiary of Saipa, is launching the assembly of Chinese-made Dongfeng Yuan Xiaokang minivans, panel vans and pickups badged as Zamyad. The vehicles are known as DFSK or Sokon in export markets. ‟The assembly of our vehicles at Zamyad starts this year,” Pang Hai, general manager of Chongqing Sokon Motor Group’s export company, tells WardsAuto.

Iran Khodro recently launched assembly of China’s Haima S7 SUV at its Khorasan plant. The Iranian public can see the locally made Haima S7 at this week’s Mashhad auto show. Plans call for annual production of about 20,000 units.

Other assemblers of Chinese cars include Bahman Group, which offers FAW sedans and Zhongxing SUVs under its own brand, and Morattab, which has Gonow SUVs in its portfolio.

Another assembler, Diar, builds BAIC and Great Wall models. The company even prepares production of the BAIC Sabrina Electro hatchback electric car, known as the Beijing E150 EV in China. ‟We expect some demand from taxi companies,” a Diar representative says.

In addition to Chinese cars made in Iran, other Chinese brands including Changan, MG and Geely are sold in the country as completely built-up imports.

Other Chinese light vehicles such as pickup trucks and minibuses are assembled in Iran as well. Chinese pickups are assembled by Iran Khodro Diesel, by Saipa subsidiaries Pars Khodro and Zamyad, and by Bahman, Diar and Morattab.