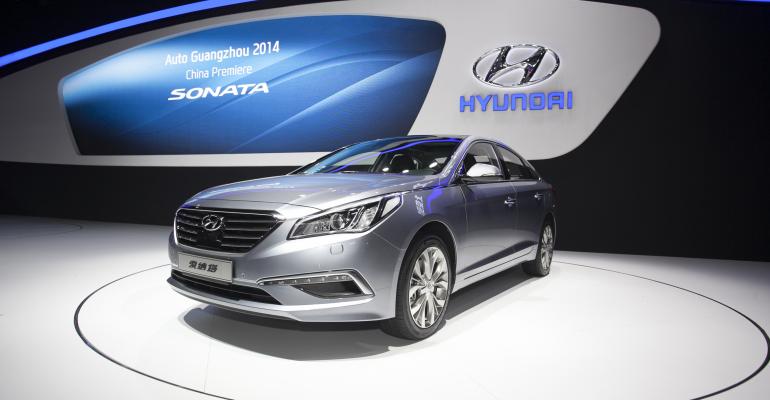 In addition to a sharp plunge in Chinese sales due to a government-led boycott of Korean products, the automakers are facing higher wage demands from their unions and calls for price increases from suppliers.

Chinese government fomentation of anti-Korean sentiment is a primary factor in a devastating 65% drop in Hyundai-Kia vehicle sales in the market in April, and little letup in government pressure is foreseen.

Total global sales for the two brands, including Korean domestic sales for April, tallied 364,225 vehicles, a 10% drop from March and a 12% decline from year-ago.

China is enraged South Korea has deployed an American missile defense system to guard against attacks from North Korea, but which also can detect any missile activity in much of China. The government is encouraging Chinese consumers to reject Korean-made products – notably cars.

The consumer revolt against Korean products has not impacted General Motors’ China operations, although Shanghai GM imports some vehicles from Korea in knocked-down form for final assembly in China.

The drop follows sharp March sales declines for both automakers in China. Hyundai sales fell 44% to 56,026, while Kia’s volume dropped 68% to 16,006 vehicles.

Some analysts cite other causes for the sales declines in China, although anti-Korean sentiment because of the missile deployment is seen as primary. Many point to the fact both brands have sedan-heavy portfolios in China when SUV sales are accounting for more than half of demand in the market.

Even in the SUV sectors, both companies are being hit heavily by onslaughts from Chinese “homegrown” automakers, which are offering vehicles at significantly lower prices.

Even if the Chinese government stopped its anti-Korean product rhetoric and consumers quit boycotting Korean products, both Hyundai and Kia still would face sales problems because of current product mix and relatively higher prices, some analysts predict.

Hyundai Mobis, the largest among captive suppliers, depends on Hyundai and Kia for about 70% of its total global sales. It posted a 1% decline in revenue for the first quarter and a 4.2% drop in net profit.

Some analysts predict second-quarter global sales for Mobis will decline more than 8% and operating profits will fall some 20%, with the huge decline in China sales providing much of the downward pressure.

Another factor in the Hyundai Mobis outlook is the huge 4-month inventory backlog of Hyundai and Kia vehicles in the U.S.

Despite its present situation, Hyundai also is facing severe pressure from its relentless labor union. The Hyundai Branch of the Korean Metal Workers Union is making strong wage-increase demands ahead of official negotiations, which will launch soon in Ulsan.

The union also wants Hyundai to increase the average base wage by 180,000 won ($158) per month. Combined, these demands, if fully met, would give every worker additional compensation of 30.3 million won ($26,668) for one year.

It should be noted that all employees at the manager level or above have taken a voluntary 10% cut in salary since last October to help reduce the company’s operating expenses.

Kia has not commented on union demands, but in past years they have mirrored those made by its sister union at Hyundai.

In addition to union demands, Hyundai is facing price pressure from its steel suppliers, including its Hyundai Steel affiliate.

The supplier is demanding an increase of 130,000 won ($105) per ton. The steel price increase is needed to offset surging basic ore costs and the fact that in 2015 Hyundai Steel reduced its steel price for Hyundai by 80,000 won ($64) per ton and it has remained frozen ever since.

Analysts say there is no way Hyundai can meet the steel price increase, given its current outlook.

The two companies at present are at an impasse, although negotiations are ongoing.