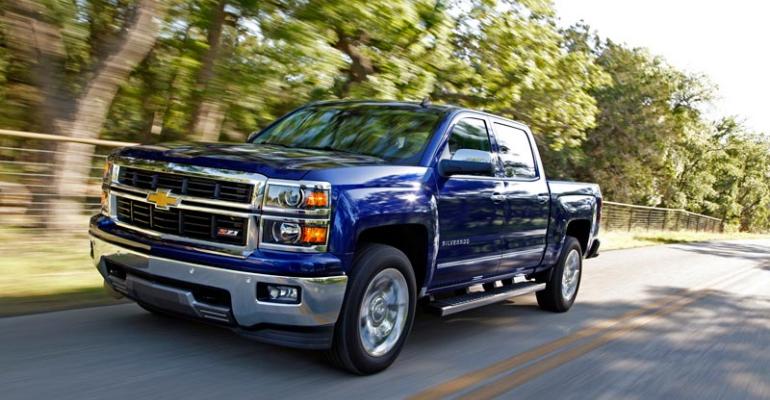 The Silverado marketing campaign will kick off with an original song by Grammy-nominated recording artist Will Hoge. The song &ldquo;Strong&rdquo; will debut as a music video and television commercial.

General Motors later this week will kick off one of the biggest marketing campaigns in its recent history to promote the redesigned-for-’14 Chevrolet Silverado fullsize pickup, an effort that also will conjure up some proven advertising themes for the brand.

The campaign bows on July 4 in Texas, exclusively, where one in every six pickups in the U.S. is sold. The ’14 Silverado also includes a Texas edition model and the media preview for the truck was hosted outside of San Antonio.

Chris Perry, vice president-global marketing at Chevrolet, says in addition to television the campaign will include radio and print ads, special events marketing and digital campaigns to make it one of GM’s biggest promotional spends since the auto maker last redesigned the truck in 2006 as a ’07 model.

“This is the most important launch of the year, and the investment we’re putting behind it is equal to that,” Perry tells WardsAuto during a briefing on the campaign. “There is no avenue we are not taking advantage of to get the message out around this truck.”

The Silverado ranks as GM’s top-selling model, with 418,312 deliveries last year, according to WardsAuto data. It also is the industry’s No.2 seller in the U.S. behind its principle rival, the Ford F-Series large pickup.

The Silverado marketing campaign will kick off with an original song by Grammy-nominated recording artist Will Hoge. The song “Strong” will debut as a music video and television commercial.

Strong’s themes of character and values will carry through much of Silverado marketing in the second half of the year and recalls historic Chevrolet campaigns such as “Like a Rock,” which became one of the longest-running advertising campaigns ever.

The initial television commercial uses real Silverado owners from Texas and the state of Washington, he adds, giving the spot authenticity.

“Steady traditional values – determination, helping others, self-reliance – haven’t been portrayed lately,” Perry says. “It is something Silverado stood for and we’re kind of getting back to that.”

As such, Perry thinks the Silverado campaign differs directionally from its competitors. Ford, he says, markets its F-Series line as the “presumptive” leader of the pack, while Ram has positioned its 1500 as “the challenger.”

“We see an opportunity in between where we can grow our share,” he says.

Future advertising will highlight key technical aspects of the Silverado.

The July 4 launch of the Silverado marketing campaign is no coincidence, either. GM wants to draw a parallel between the pickup and the notion of American pride.

The first Silverado television commercial was created by Commonwealth, Chevrolet’s global advertising agency. Future spots will be crafted by Leo Burnett, the brand’s agency of record.

GM hopes to make the Silverado, already one of its top money-makers, more profitable by selling more crew-cab models. The body style will comprise much of its early production. Regular-cab and double-cab models will hit the market later this year.

GM also brings a new High Country luxury model of the Silverado to market with the ’14 redesign, hoping to grab a bigger share of the over-$40,000-pickup market.