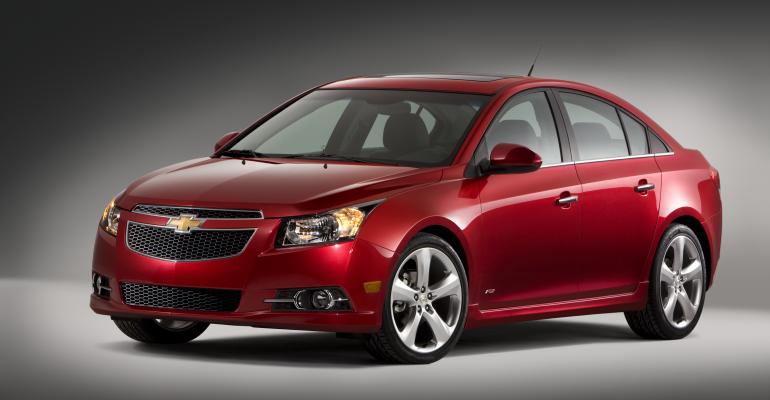 Chevy Cruze Could Dictate Direction of Compact-Car Segment in 2012

Just how aggressive pricing in the segment will become likely hinges on the fortunes of the leading Cruze and how desperate both domestic and Asian auto makers are to regain share.

Expect competition at the lower end of the U.S. passenger-car market to boil over next year, as revitalized Asian auto makers put the heat on a newly assertive General Motors and Ford in the compact segment.

Just how aggressive pricing in the segment will become likely hinges on the fortunes of the Chevrolet Cruze and how desperate both domestic and Asian auto makers are to regain share.

Through November, the new-for-’11 Cruze sedan led the small-car segment with a 10.1% share on deliveries of 215,057 units, according to WardsAutodata.

But the Cruze’s share of the segment was down 8.1% from its 12.8% peak in July, as Toyota and Honda continued to rebuild inventories depleted after Japan’s earthquake and tsunami on March choked their supply lines.

Inventories of the Cruze also have swelled, climbing to 88 days at the close of last month, prompting GM to take its Lordstown, OH, assembly plant down for a week. The auto maker believes added time off during the holidays will bring Cruze stocks closer to the industry norm of 60 days’ supply.

Lordstown continues to run on three shifts, a schedule the factory started at this time last year. GM, sharply focused since its 2009 bankruptcy on building only what the market will absorb, signals no intent of yanking the third shift even though its production target of 235,000 units this year traditionally could be accomplished over two shifts.

“There has not been a hint about eliminating a shift,” says Jim Graham, president of United Auto Workers union Local 1112 in Lordstown. “The (Cruze) is selling extremely well and we expect that to continue, regardless of what Ford, Toyota and Honda might do,” he tells WardsAuto.

GM spokesman Jim Cain says the auto maker intends to maintain a stable production pace for the Cruze, calling it “a successful product that has established itself quickly.”

A year-over-year comparison shows the Cruze outselling its dowdier, more-spartan Cobalt predecessor by 66%.

However, the Cruze will have a strong competitor next year in its own showroom with the new-for-’12 Sonic subcompact, which is bigger, more powerful and better-appointed than its predecessor, the Aveo.

GM expects the Cruze to continue to benefit from an overall sales market the auto maker forecasts to grow to some 14 million units in 2012, up from 13.5 million forecast this year, including medium- and heavy-duty trucks.

The 5-year-old model is due for a makeover, perhaps as early as next fall. Sales through November were down 8.2% compared with year-ago.

The new-for-’12 Honda Civic, which holds third place in the compact segment with a 9.5% share on 200,690 deliveries through November, has rebuilt inventories but sales were down 13.5% year-on-year.

The new-for-’11 Ford Focus and Hyundai Elantra both will assert themselves in the mix. Ford claims it has remedied a production snafu that held up sales when compact-car demand was at its height over the summer. The Focus claimed 7.2% of the compact segment through November on sales of 161,436 units.

The Elantra, which commands 7.6% on 173,336 deliveries, will continue to strengthen its competitiveness with recently added capacity at its assembly plant in Montgomery, AL.

Rebecca Lindland, an analyst with IHS Global Insight, does not expect a pricing war in the segment next year, given the slim profit margins on the new generation of compact cars. “It’s tough to discount these vehicles because they are priced so low and are so well-contented,” she says. “There is not a lot of room to play with the pricing.”

Ford vows to stay away from incentives on the redesigned Focus, which has been selling at a $2,000 premium over its predecessor.