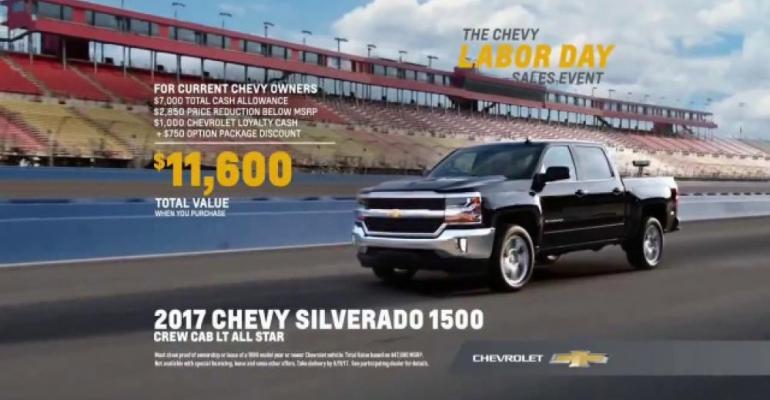 Chevrolet took first place with its commercial promoting a Labor Day sales event. The bowtie brand put popular models through rigorous tests to showcase the excitement owning a Chevy can bring. Music by The Hives gives the spot an upbeat feel.

Chevrolet marks the run-up to the Labor Day holiday with the automotive ad that tallied the highest number of impressions across national broadcast and cable TV airings for Aug. 28 through Sept. 3.

The bowtie brand took first place with its commercial promoting a Labor Day sales event. Chevrolet put popular models through rigorous tests to showcase the excitement owning a Chevy can bring. Music by The Hives gives the spot an upbeat feel.

At No.2 was Nissan (down from first place last week), with its ad showing football fans and Heisman Trophy winners coming together to experience an award-winning lineup of Nissan models. During the Bottom Line Model Year-End Event, customers are offered big savings and special deals.

Third place went to GMC with its now-familiar message urging us to live “like a boss, like a pro.” This version of the ad showcases the ’17 Terrain Denali; for a limited time people can get 20% below the retail price on Terrain models. End-of-summer sales events continued at No.4 with Honda’s festive, colorful spot letting prospective customers know the “sun is setting” on appealing deals for the ’17 Civic LX Sedan, such as $169/month leases.

Mitsubishi rounded out the ranking with an enduring ad that’s appeared on the chart multiple times. During the 100th Anniversary Sales Event, customers can take advantage of attractive financing deals to make sure their families can have it all, from a multi-view camera system and blindspot warning to forward-collision mitigation and standard third-row seating with the ’17 Outlander.

TV Impressions - Total TV ad impressions delivered for the brand or spot.
Attention Score - Measures the propensity of consumers to interrupt an ad play on TV. The higher the score, the more complete views. Actions that interrupt an ad play include changing the channel, pulling up the guide, fast-forwarding or turning off the TV.
Est. National TV Spend - Amount spent on TV airings for the brand’s spots.