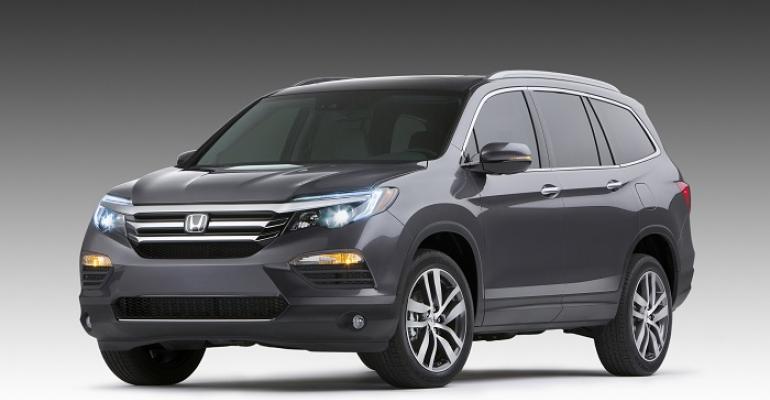 The Japanese automaker is awaiting measures that will free up more capacity for the Pilot and CR-V CUVs, the latter the No.1-selling CUV in the U.S.

CINCINNATI, OH – Honda believes it can sell even more CUVs in the U.S., but right now the automaker is in limbo as it awaits capacity-expansion measures.

“We’d like to sell in greater numbers than the year before, (but) our challenge is going to be capacity,” he tells WardsAuto in an interview here during a ’16 Pilot media preview.

Preventing Honda from aiming much beyond last year’s Pilot volume, or matching the record 152,154 delivered in 2006, is its Lincoln, AL, plant. Home to the Pilot, Lincoln is tapped out as it is works to meet strong demand for the Acura MDX CUV.

Honda in February announced a plan to shift some MDX production to its East Liberty, OH, plant, but that won’t occur until 2017.

“So we’ve got a plan (to grow volume), but it’ll take us a little bit (of time) to get there,” Conrad says.

Also suffering from capacity constraints is the CR-V. For the past five months the midsize CUV has been Honda’s top-selling model in the U.S. and last year hit a best-ever annual volume of 335,019, making it the No.1 CUV in the U.S.

But that popularity is draining inventory. The CR-V’s 38-days’ supply in late March was 20 days below the industry average for light trucks, WardsAuto data shows.

Asked if there is any trigger Honda can pull to increase CR-V builds, such as sourcing from Japan, Conrad says, “Not at the moment.”

At the East Liberty plant, also home to the CR-V, Honda will be ceasing production of the larger Crosstour CUV at the close of the ’16 model year.

However, this action likely won’t free up much capacity. The Crosstour is a low-volume model and last year Honda built only 13,079, WardsAuto data shows.

What’s more, Honda has said the capacity freed up at East Liberty will be shared among the CR-V, the Acura RDX CUV and future MDX builds.

Anticipating its upcoming HR-V small CUV will be more popular than projected, Honda will begin dual-sourcing its Fit subcompact car from its Yorii, Japan, plant this fall. Currently all Fits sold in the U.S. are assembled at Honda’s Celaya, Mexico, plant, also home to the HR-V. However, Conrad says the automaker is not altering the HR-V’s U.S. sales target.

Yorii will supply an estimated 30,000 Fits for the U.S., says a Honda spokeswoman.

As well as debuting a next-gen Pilot and the all-new HR-V, it will bring out the 10th-generation Civic later this year.

Because the sell-down of the current Pilot is going better than anticipated, Conrad says Honda likely will lose some large CUV sales to the competition as it awaits the June launch of the ’16 model.

“(At a) 15 days’ supply it gets a little more challenging finding the model (and) color you want and so we’re missing some business that’s out there right now,” he says.