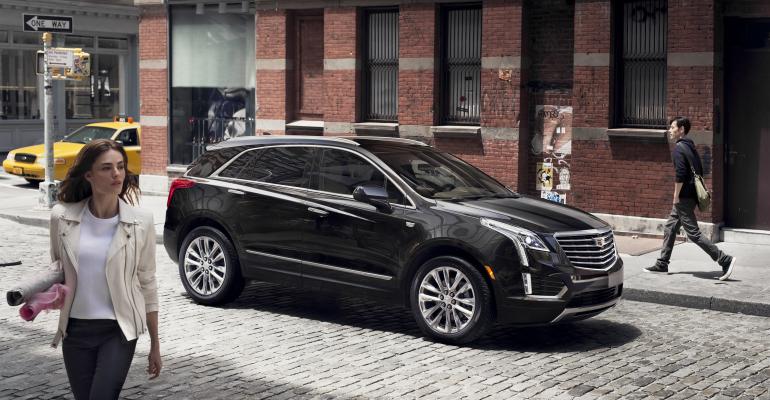 The &#39;17 XT5 will replace the SRX, the&nbsp;best-selling vehicle for the General Motors luxury division.

Cadillac releases the first public images of the all-new XT5, a 5-passenger CUV scheduled for a global premiere at the Dubai auto show in November.

The '17 XT5 will replace the SRX, the best-selling vehicle in the General Motors luxury division. It also will usher to market a new naming nomenclature for Cadillac CUVs, which going forward will begin with the “XT” designation. The number will signify the car’s relative size and position within the Cadillac CUV lineup.

The XT5, due in 2016 from GM’s Spring Hill, TN, assembly plant, will serve as the cornerstone of the brand’s CUV portfolio. It will come in all-wheel and front-wheel-drive configurations with a hybrid option, according to WardsAuto data.

Johan de Nysschen, president and CEO of Cadillac, told WardsAuto earlier this year a broader range of CUVs to match its German rivals will be pivotal to the brand’s revival and its global sales ambitions.

“We have a very truncated lineup today,” he said.

Smaller CUVs are taking over the global luxury market, satisfying consumer demands for car-like driving dynamics and the commanding road view of an SUV.

The XT5 marks the second all-new vehicle from Cadillac as GM revamps the brand with a $12 billion investment over the next five years. The CT6, a flagship sedan for the time being, arrives early next year. GM also has moved Cadillac’s core operations out of Detroit to a new global sales and marketing headquarters in New York with the hopes it will flourish under greater autonomy.

“Cadillac is back and back with a vengeance,” De Nysschen says.

Cadillac also releases a video of the XT5, which was shown to a private audience Wednesday in New York as part of a new collaboration between the brand and the fashion designers Public School.