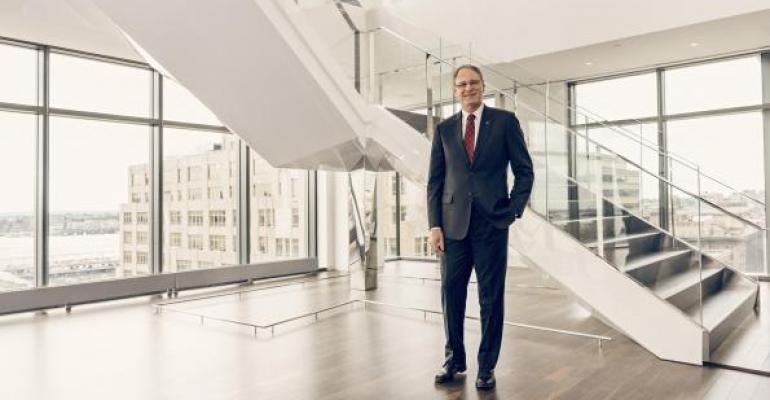 The brand is nine months away from its pivotal product offensive beginning with the XT4 small CUV. Quick on the heels of the XT4 is a third CUV slightly larger than the current XT5.

DETROIT – Cadillac arguably has passed the first test of its revival under Johan de Nysschen, who took over as president of the General Motors luxury brand in 2014, by repositioning itself in the eyes of key customers, introducing exclusive technology and perhaps most importantly resisting brand-eroding discounts for the sake of sales volume.

The champagne is still on ice, however. Because although the 115-year-old brand posted its second-highest global sales in 2017 with 356,457 deliveries, including 175,489 in its now-largest market of China, demand in the more profitable U.S. fell 8.0% to 156,440. That’s the fewest vehicles Cadillac has sold in the U.S. since 2012, according to WardsAuto data, when it delivered 149,782 from what was essentially a three-product portfolio.

A rapid flip in consumer demand to CUVs was the primary culprit, as Cadillac was caught short with a sedan- and coupe-heavy lineup. Sales of its cars, mostly long-in-the-tooth designs with the exception of the CT6, plunged 27.4%.

Meanwhile, sales of the Cadillac XT5, its sole crossover, soared 73.0% to 68,312 and it finished No.2 in the industry’s largest luxury segment behind the Lexus RX. Including the Escalade large luxury SUV, Cadillac truck sales rose 5.4% to 106,162.

“Judge 2017 in the context of the long-term execution of our strategy,” de Nysschen tells WardsAuto during an interview at the 2018 North American International Auto Show here. “That is what we are focused on, and the measurement of success is far more multidimensional than the sales score.

“We did not want to relent and undo all the good will that had come before,” he adds. “If you are on a diet and lose 20 lbs. but your goal is 30 lbs., now is not the time to start feasting. “

In that context, Cadillac’s latest revival attempt is bearing early fruit. GM’s ongoing $12 billion capital investment in the brand, begun in 2015, was aimed at broadening its U.S. lineup, but the key to making its business sustainable in its home country was predicated on a rapid boost in volume by selling more cars in China. But an export strategy would be too costly, so Cadillac spent $2 billion on a local assembly plant to be price-competitive and additional investment then was put toward a high-end, stand-alone dealer network that continues to grow today.

With China going great guns for Cadillac, de Nysschen’s team now can turn attention back to the home market, where brand-building and pricing discipline has the marque running far below the industry average on incentive spending, while residual values are up, average-transaction prices have risen 15% in the past three years to No.2 in the business and nearly 50% of its vehicles sold in the U.S. now go to buyers aged 52 years and younger.

“We are gaining traction,’ de Nysschen says. “On a lot of those foundational aspects, we made great progress.”

In terms of new sheet metal specifically, de Nysschen says Cadillac is nine months away from a pivotal product offensive beginning with the XT4 small CUV. Quick on the heels of the XT4 is a third CUV slightly larger than the current XT5, as well as a new Escalade off the next-generation truck platform introduced here this week that promises to be more differentiated from Chevrolet and GMC large SUV offerings.

Before 2021 the brand also will add new sedans for the middle and entry end of the car segment.

GM expects the product infusion to push Cadillac global sales in a growing luxury market to nearly 600,000 units annually by 2021 and profitability up 100%, with the U.S. playing the main role in driving profits.

Cadillac has begun restoring its reputation for technical leadership, too, rooted in the introduction last year of Super Cruise autonomous-driving capability. Super Cruise permits hands-off driving during closed-highway situations and the technology helped vault GM to an industry-leading position on autonomy, according to a new report from the consultancy Navigant Research.

The brand will continue to play a bigger role in introducing new technologies in the coming years, de Nysschen says, restoring it to its traditional place within the GM engineering hierarchy. Of the 20 battery-electric vehicles from the automaker in the next five years, “a good chunk of them” will wear the Cadillac badge, he says.

“We will be the technology lead for the company,” de Nysschen says. “That means zero-emission propulsion systems will feature very prominently in our medium-term plans.”

Cadillac’s zero-emissions strategy will be important to its global expansion, as well, de Nysschen says. Those vehicles will meet strict upcoming regulations in China and then get rolled out in Europe, which also plans to tighten tailpipe emissions to the point where electrification becomes the prevailing propulsion technology.

“If we want to be successful in Europe, we have to have the product – smaller cars and crossovers with the right propulsion systems,” de Nysschen says, declining to offer a timetable for the brand’s reintroduction on the continent but admitting Cadillac’s diesel plans there have been force-corrected by the new regulatory regime.

“If we went to Europe now and wanted to be successful, we would have to invest in developing a family of diesel engines, which would be insane because they would have a very limited lifespan,” he says. “It would make no sense.”

In the meantime, de Nysschen says he plans to continue infusing the brand with a sentiment of exceptionalism.

“A lot of the work we’ve done in the last three years has focused on the question of what Cadillac stands for and how that translates into unique standards for Cadillac engineering, design and manufacturing quality,” he says. “We are the pinnacle brand at General Motors and what we deliver must get us back to that spiritual notion of the standard for the world.”