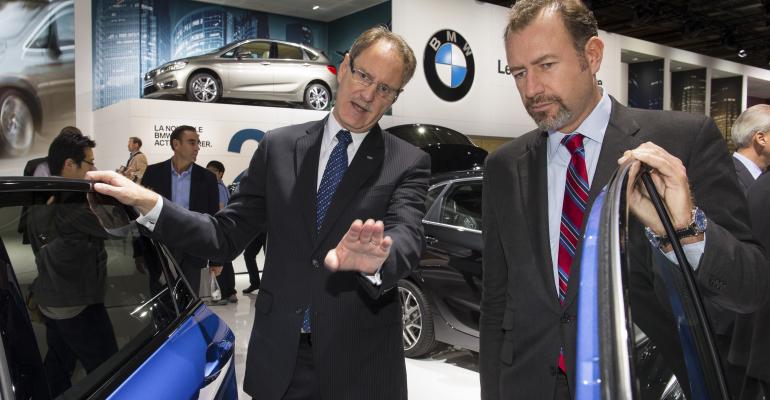 While Cadillac&rsquo;s president sees a need to address a product gap below the ATS compact sports sedan with a vehicles the size of the Audi A3 or BMW 1-Series, he suggests the top of the market will draw attention first.

“Our product plan through 2020 has been fixed,” de Nysschen, global president of Cadillac, tells WardsAuto during an interview at the North American International Auto Show here.

“We’ll see eight new models, of which five are new segments,” he says. “Those cars include a $12 billion investment. That gives you an idea of the commitment GM has to the brand. We are on our way back.”

While de Nysschen sees a need to address a Cadillac product gap below the ATS compact sports sedan with a vehicle the size of the Audi A3 or BMW 1-Series, he suggests the top of the market will draw attention first with the Cadillac CT6 due later this year.

The CT6 will be an interim flagship sedan for Cadillac until a second large car can offer proper competition to the likes of the BMW 7-Series and Mercedes S-Class. A product slotted between the SRX 5-passenger CUV and Escalade large SUV also are a priority, as is a CUV smaller than the SRX, de Nysschen says.

“It is somewhat ironic the Germans have more crossovers and SUVs than we have and we invented the product category,” he says.

Each of the future products will play a specific role, he adds, just as the V-Series models proliferating through the lineup today.

“There is a very deliberate intent behind (V-Series),” says de Nysschen, who is four months into the Cadillac job. “They are taking the challenge to the market segments where the Germans built their reputation. We could have gone for some softer targets, but we went straight for the jugular.”

Beating their rivals at the top of the market, where BMW and Mercedes built their brands, will bring Cadillac much-needed credibility, he says.

The former Infiniti and Audi of America boss also says Cadillac must address the customer experience to compete with Germans. If Cadillac were new to the U.S., rather than cemented into the market for 100 years, the current count of 929 stores would be much too great, he says. And Cadillac has too many stores dueled with other GM brands.

“Selling Cadillacs out the back door of the Chevy store must stop,” he says.

De Nysschen plans to push those dealers to invest in stand-alone rooftops, and those dealers in small markets where sales volumes are modest he suggests shifting to a boutique model where two or three products occupy the showroom floor. Technology would replace absent models.

However, in the end, he says, he wants to boost the volumes and profitability of Cadillac’s dealer body.

“We are in the same boat and on the same side,” he says.