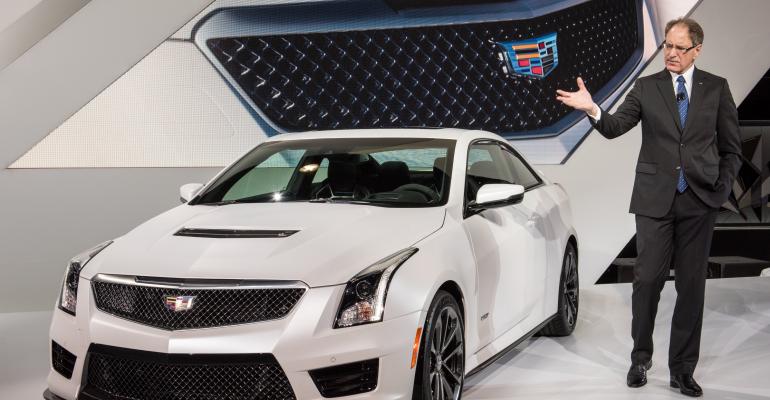 Chief Johan de Nysschen is looking to lead Cadillac out of a &ldquo;no-man&rsquo;s&rdquo; land, where its vehicles are priced too high for legacy customers and the brand lacks the equity required to conquest Mercedes and BMW buyers.

LOS ANGELES – Patience is needed – particularly inside General Motors, Cadillac President Johan de Nysschen says, as he embarks on a mission to return the brand near the top of the luxury-car rankings.

The to-do list is a long one that includes a product-line expansion drive pointed toward 2020, as GM takes on the herculean task of convincing high-end luxury-vehicle buyers to put Cadillac high on their shopping lists.

It’s an especially tall order for a brand de Nysschen says is “stuck in no-man’s land” at the moment, with a small stable of products that are critically acclaimed but have entry-price points beyond the reach of many traditional Cadillac buyers.

To accomplish his goals, de Nysschen will have to walk the razor’s edge to manage expectations inside GM, which will need uncharacteristic fortitude and forbearance to stick with the brand’s game plan from beginning to end.

Asked how industry-watchers a year from now will be able to tell whether Cadillac’s moving in the right direction, de Nysschen says there will be no seismic shifts to be seen in such a short time.

“We’re in a long-term business,” he tells WardsAuto on the sidelines of Los Angeles auto show, where Cadillac unveiled a new 455-hp ATS V-Series that joins the lineup in early 2015.

Putting Cadillac back among the top premium brands “is going to take many, many years of product substance, careful crafting of the brand and making sure the brand values and positioning is absolutely permeated into the product philosophy, the quality of the dealer network and the ownership experience,” he says.

The roadmap will be similar to one de Nysschen followed when he led Audi of America and one he was putting in place during an aborted 2-year stint at the helm of Infiniti: Get the product right, whip the dealer network into shape and begin the long-haul effort to change consumer perceptions about the brand.

It worked in spades at Audi, which once was nearly drummed out of the U.S. market, but now is on a perennial record-setting sales pace that has seen average transaction prices climb $9,600 per unit in the past five years and a bevy of enthusiastic dealers invest a collective $1 billion in showroom upgrades.

“If we address some of the things that are in our control, such as getting inventories under control, getting discipline in terms of pricing and incentives and discounts and (beginning) work on a more carefully crafted communications strategy, then by next year, we’ll already have accomplished a lot,” de Nysschen says.

For Cadillac, the problem starts with its core model, the CTS sedan and coupe, a hit with the enthusiast press but priced about $8,000 above its previous generation.

“Magnificent product…comes with a cost premium,” the Cadillac chief says. “It costs us no less to produce (the CTS) than it does BMW to produce the 5-Series. People say to me, the sales aren’t what they should be, (but) this shows shallow insight.

“You either charge a fair price that is commensurate with this increase in costs and accept there could be a volume impact, or you keep your prices as they were and you make no money.”

Some traditional CTS buyers have “stepped up to the new car,” he says. “But others have been unable to. (And) the target audience that is comfortable with transaction prices at that level does not yet have Cadillac on the top of their consideration set.”

Despite the already existing price-audience gap, de Nysschen contends timing isn’t too soon in the marque’s plan to launch a new flagship sedan, dubbed CT6, due next year.

That model will have all the refinement, technology and performance of a Mercedes S-Class, BMW 7-Series and Audi A8, he promises, but will be sized and priced against lower-level, standard-wheelbase versions of those cars.

“It has to come now,” he says of the CT6. “It is an important part of this journey of elevating the brand and building on credible product. If we want to really entrench Cadillac as a formidable player in the premium segment, it’s necessary to have flagship cars that can take on the very best the German brands have to offer.

“What has to be recognized, though, is that when you enter the market at price points the brand has never seen and where you don’t have a single customer – everything has to be conquest. Your volume aspirations better be pretty realistic.

“And that is going to be part of the challenge – to manage those expectations internally, within the corporation.”

The CT6 will be the first of a line of new models that take Cadillac’s stable from six lines today to about a dozen in 2020, allowing the brand to broaden its market coverage. Today, Cadillac has entries in only about half the premium segments, de Nysschen says.

On the drawing boards are a model below the ATS in size, a CUV positioned between the next-generation SRX and truck-based Escalade meant to challenge the Porsche Cayenne and BMW X5, and two smaller CUVs that would compete against the BMW X3 and Audi Q3 and even more diminutive models such as the BMW X1.

Some of the new entries will be in showrooms by 2017, with the product assault peaking in 2019-2020, de Nysschen says. Although the China market is clamoring for it, the smallest CUV won’t come until after 2020, however.

“We can’t go (down market) too far, too soon,” he says of prioritizing other new entries ahead of the B-size CUV. “I want to spend some time taking the center of gravity of the brand upscale.

“We have one crossover and one SUV,” he adds. “It’s strange (to) look how many the Germans have. This is completely wrong. They are obvious gaps in our product lineup. We are working flat-out to develop market entries for Cadillac.”

In the meantime, the big play will be a model to come above the CT6 in size and price that will take on high-end S-Class and 7-Series models at the very upper reaches of the volume luxury market.

“That will be the ultimate flagship for Cadillac,” de Nysschen says. “That will be the real halo car for the brand. It will be the car that really embodies the sum total of the technical prowess, the engineering ability, the design and craftsmanship of General Motors. It’s a showcase for what we can do.”

Hybrid powertrains also will have to play a bigger role in order to keep pace with the Germans, who continue to knock out new plug-in models for an eager audience. A PHEV CT6 is planned, and Cadillac likely will be patient with its Chevrolet Volt-based ELR, despite sales reaching only 1,037 units so far this year.

“We will have more than one PHEV,” de Nysschen says. “It’s going to be a big part of our powertrain strategy. If you don’t do that, you don’t play in China. So this is part of the new paradigm.”

For now, GM will have to be content with lower volumes at Cadillac until buyer perceptions can catch up with product realities. That means controlling production so dealer lots aren’t flooded with unsold cars, forcing the automaker to offer brand-eroding incentives to move the metal.

Earlier this month, the automaker moved to do just that, eliminating a shift of ATS and CTS output at its Lansing (MI) Grand River plant. But even though that action follows perfectly Cadillac’s roadmap, it wasn’t a decision that came easily inside GM, de Nysschen admits.

“(GM) is a company that is used to playing in the big league,” he says. “And the rulebook in the premium sector is different. In the mainstream sector it’s about market share, volume, creating the incremental sale. If you apply that to the premium business, you end up with Cadillac with 30 years of erosion in brand equity.

“Until now, (GM) managed (its) portfolio…with the same (methods) applied across all the brands. (But) what’s good for Chevy, GMC and Buick may be entirely wrong for Cadillac.”

Maintaining inventories at the industry norm of 70-80 days’ supply is “exactly wrong for the Cadillac business,” he adds. “If you start incentivizing cars because you have to move volume, then you’ve (guaranteed) failure.”

To try to ensure it is piloted differently than Chevrolet, GM has spun off Cadillac as a separate entity, with its own New York headquarters staffed by a still-to-be chosen 30 or so people who will be expected to live and breathe the luxury-car market 24/7.

“It’s not that the people that are handling the business today don’t know what they’re doing,” de Nysschen says. “The problem is we’ve never given them the opportunity to really study the premium segment on its own. With the separation in organization, we’ll be applying the dedicated resources to do precisely that. Nobody at Mercedes, BMW or Audi work part time.”

De Nysschen told Bloomberg last week Cadillac will begin reporting its own financial results in 2017, with a target of a 10% margin by 2020. The brand is aiming at global sales of 500,000 vehicles annually by then.

Effort also is needed on the retail side. De Nysschen wants to see a reduction in Cadillac’s 929 dealers, and those that remain will need to upgrade their showrooms and get more engaged in the used-car business to boost profitability and push up vehicle residuals.

The used-vehicle sector “is an important revenue and profit stream that not all dealers are fully engaged in,” he says.

The final piece to the puzzle is China, already the largest new-vehicle market and destined to become the biggest luxury-vehicle arena as well.

“This is the home market and where we generate most of our profits,” de Nysschen says of North America. “But ironically, China holds the key to success in the U.S. We must use China as a second volume hub for the brand, so that it can share the burden of generating the volume to support the business case of all these new products.”