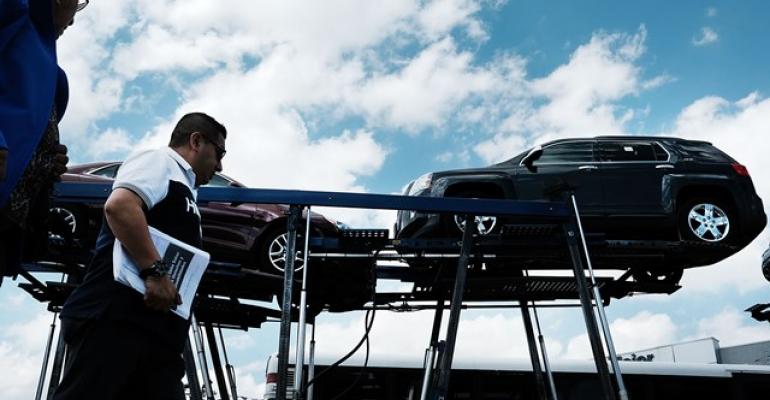 The AlixPartners consultancy says a key element of its forecast is a &ldquo;used-car time bomb&rdquo; set to go off as 500,000 more vehicles come off lease this year than year-ago.

DETROIT – A significant downturn in U.S. new-vehicle sales is coming because it is intrinsic to the industry, leading analysts say, but it likely will not be the painful trough of a decade ago and should give automakers and suppliers the opportunity to recast their business for a fast-approaching shift in the automotive ecosystem.

Going back to the turn of the 20th century, the industry has witnessed sales downturns after spurts of high demand jacked up by positive economic activity, offers Mark Wakefield, global co-head-Automotive and Industrial Practice at AlixPartners, a New York-based business consultancy.

AlixPartners forecasts 2017 sales of 16.9 million units, down from a record 17.5 million last year. WardsAuto forecasts 17.1 million light-vehicle deliveries this year. Looking further ahead, AlixPartners thinks sales will tumble to 15.2 million in 2019, a forecast that runs counter to many others that see industry sales enjoying a long-term plateau near current levels.

AlixPartners says its forecasted downturn may not sting as much as previous ones. That’s because automakers historically would respond to downturns by artificially pumping up sales with juicy discounts or dumping inventory into the fleet channel.

At its best, the strategy kept assembly plants churning at the expense of profitability. At its worst, as automakers witnessed during the Great Recession of 2009, the ploy led to a wave of bankruptcies that included General Motors and the former Chrysler.

Wakefield says after taking the hard medicine of seven years ago, automakers have learned their lessons and are exercising discipline unseen before in the industry – even among oftentimes rogue players and Detroit automakers used to going tit-for-tat on incentives.

“In 2001, when GM did its Keep America Rolling (incentive), Ford immediately responded and very soon after (so did) Chrysler and eventually Toyota,” he tells WardsAuto after a presentation to the Automotive Press Assn. here. “Replay the clock, (and) that may not have been the best strategy. Profitability of the whole industry went down.

“That’s taught some lessons, and now you have (OEMs) taking down production faster than they have in the past,” he adds, noting also that while inventories and incentives are creeping up, fleet sales remain stable. “That’s one element of discipline.

“It’s not worth it to buy a plateau,” Wakefield continues. “We will have a mild downturn if we plan for it.”

Further evidence of the new discipline: Automakers are communicating with each other when they do boost incentives to clear inventory.

“You hear it in their monthly (sales) calls: ‘We’re just doing this for inventory. Nobody kill us. Please don’t put another $2,000 on your competing vehicle,’” Wakefield says facetiously.

But market share is not entirely taking a back seat to profitability.

“Only when needed,” he says. “Once forced to take those moves they do, reluctantly. Nobody is taking pre-emptive moves. They are reactive.”

Wakefield says a key element of the consultancy’s forecast is a “used-car time bomb” set to go off as 500,000 more vehicles will come off lease this year than year-ago. The flood of previously owned cars and trucks likely will double the 13% drop in used-vehicle prices the industry has witnessed since 2014.

The dynamic will cause a double-whammy to sales, he predicts, as new-car shoppers turn to cheaper used cars and lease payments on those new vehicles rise against anticipated lower residual rates and costlier credit standards.

AlixPartners suggests automakers and suppliers take advantage of the pause in sales to adjust their business for a changing automotive ecosystem driven by new levels of connectivity, the promise of self-driving cars, and shared and battery-electric vehicles.

“Right now, we are on a bridge to the future and the future is coming very quickly,” says John Hoffecker, global vice chairman at AlixPartners.

As far as connectivity, Hoffecker points to the “high-specification” interior center stack from EV maker Tesla, which boasts over-the-air update capability and iPad-like features. Although on the market since 2012, it has garnered strong reviews and no company has yet to match its technology, he says.

On the autonomous-vehicle front, more than 50 major companies, ranging from established automakers to startups such as Tesla and information-technology companies, are working on self-driving cars. AlixPartners thinks the intense competition will lead to a 78% price drop in AV systems by 2025.

“Whoever gets to autonomy first will have a major advantage,” Hoffecker says.

An updated 10-market survey from AlixPartners reveals U.S. consumers using ride-sharing services such as Uber and Lyft, as well as car-sharing ventures such as ZipCar and Car2Go, intend to increase their usage over the next 12 months.

As far as EV sales, the consultancy forecasts China to take a leadership role on the technology, with native automakers continuing to command an overwhelming share of the market there. Globally, AlixPartners sees 103 new EVs launching by 2020 and 49 will come from Chinese OEMs. China also will command two-thirds of the world’s manufacturing capacity for lithium-ion batteries.