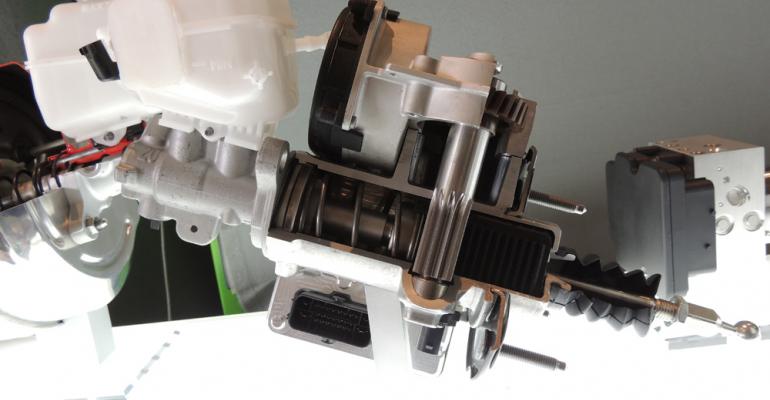 Bosch&rsquo;s iBooster operates electromechanically, does not require vacuum from the engine and recovers almost all the energy lost in typical braking. It uses electrical current only during braking.

BOXBERG, Germany – Robert Bosch says it will start production this year of an electromechanical brake booster for three vehicle models for a European customer, and the supplier says it expects the system eventually will replace conventional vacuum-based boosters.

The German parts maker has development programs with “at least five major OEMs” interested in the technology, including those in the U.S., says Gerhard Steiger, president of Bosch’s chassis systems control division during an international press briefing at the company’s test track here.

Steiger says the first rollout comes from “one big German customer with lots of different brands.”

Component manufacturers in the braking business, including Bosch rivals TRW and Continental, have been working on electrically driven brake boosters for years.

The traditional way to create more brake pressure was to generate a vacuum using intake air fed into an engine’s combustion chambers, or using an independent vacuum pump, which always consumes energy when running.

But direct fuel injection, fast becoming common on many new engines, reduces vacuum pressure, as do stop/start systems. Battery-electric vehicles create no natural vacuum at all.

Bosch’s solution is the iBooster, which operates electromechanically, does not require any vacuum from the engine and meets all future requirements of electric drives and driver-assistance systems. It only draws electrical current during braking.

Bosch brake systems “will become independent of vacuum, and our customers will as well, because vacuum is less and less available in cars, even in modern gasoline cars,” Steiger says.

The device recovers almost all the energy lost in typical braking by ensuring deceleration rates of up to 0.3 g are achieved using the electric motor, alone. Bosch says it covers all common braking maneuvers in everyday traffic.

A motor within the iBooster controls the degree of brake boosting via a 2-stage gear unit for situation-dependent support on demand. Creating no parasitic losses, the device saves fuel and can enable longer distances for coasting with stop/start systems.

The iBooster should shorten stopping distances as well, but Bosch has yet to quantify by how much. Should the camera- or radar-based predictive emergency braking system detect a dangerous situation, the iBooster can build up full braking pressure automatically in a mere 120 milliseconds – three times faster than previous systems.

This is the industry’s first electromechanical brake booster of its kind, Steiger says.

Braking suppliers such as Bosch introduced electrohydraulic braking systems years ago as the initial foray into brake-by-wire. Bosch worked with Daimler in developing the Sensotronic brake system, introduced on the Mercedes SL in 2001.

That system replaced the conventional master cylinder with a hydraulic high-pressure reservoir and a piston pump driven by an electric motor. When the brake was applied, an electronic control unit calculated the desired brake pressure on each individual wheel, for improved stability.

But there were technical difficulties, and Mercedes recalled some 2 million vehicles with the system in 2004 and 2005. The auto maker eventually dropped the system. Toyota is conducting a similar brake recall.

The Mercedes recall illustrated that brake-by-wire may need more development time, Steiger says. As a result, the new iBooster still integrates with full hydraulic braking and a conventional master cylinder.

“We said we always need direct control from the driver so we developed the iBooster, which has a direct link between the pedal and the master cylinder,” he says. “So if something goes wrong, if there is a failure, we still have the ability to brake by your own foot.”

The iBooster is more complex than a conventional vacuum booster, so it is more expensive. But Steiger says a detailed cost analysis taking into account assembly and manufacturing, for both Bosch and the vehicle maker, shows relative parity with conventional systems.

“We do not yet expect the iBooster to be ready for the real mass market in order to replace the conventional booster,” he says. “But for hybrids and electric vehicles and even for vehicles with higher weight, then it makes sense.”

Because it is compatible with all powertrain configurations, Steiger says the system is particularly valuable in allowing auto makers to avoid having to predict a specific model’s powertrain mix.

Another advantage is the ability to tune pedal feel, via software, for comfort or sporty driving. On EVs and hybrids, this means the “grabbiness” occasionally associated with braking can be mitigated and perhaps even eliminated.

Here at the proving grounds, Bosch offers test drives in an Audi A4 and Opel Ampera outfitted with the system.

TRW’s next-generation Integrated Brake Control vacuum-less system replaces – in a single unit – the stability control, vacuum booster, vacuum pump and associated hardware. TRW does not yet have a customer for the system.

At the track here, the Bosch brake system feels natural and progressive as pedal force is applied. A technician in the passenger seat uses a laptop to adjust pedal feel during the drive.

With the iBooster fully active, the calipers grab more aggressively and create the sensation of additional stopping power at the end of the braking event.

In emergency-braking maneuvers, the system is impressive. Driving at 50 mph (80 km/h), a full panic stop applied with the foot is fast, but brake force feels as if it is applied inconsistently; the car feels jittery.

Driving at the same speed and allowing the technician to apply a full panic stop, as would happen with a camera- or radar-based autonomous system, the computer does a vastly better job maximizing brake force and bringing the car to an abrupt, stable stop.

Even while expecting the stop, the event takes the driver’s breath away momentarily. The system actually is faster and quieter than electronic stability control, which is standard on U.S. vehicles and soon will be in Europe.

On the packaging front, iBooster requires about the same space as a conventional vacuum booster and can be packaged near the firewall.

Bosch exited the foundation-brake business over the past three years, selling many of the operations that produce rotors, calipers and drum brakes to Chassis Brakes International. But the supplier kept the actuation components, such as vacuum boosters, master cylinders and electronics.

Other suppliers such as Continental, TRW and Advics continue manufacturing their own foundation brakes. Steiger says Bosch has partnered with CBI in response to certain auto makers that want one point of contact for complete braking programs.

Steiger says Bosch’s chassis business is set with its global manufacturing footprint, although a new ABS plant will open in two years in Russia.

At the consumer level, Steiger says prices for driver-assistance systems are plummeting. For instance, adaptive cruise control often carried a premium of €2,000 ($2,667) on German luxury cars. But today, Volkswagen is offering ACC on the seventh-generation Golf compact for a mere €555 ($740).

“That’s full ACC functionality including emergency braking based on our radar system that’s four times less than what we used to pay,” Steiger says. “There will be erosion of price over the next year.”

Bohr Steps Down as Bosch Technology Steps Up
Jun 14, 2013