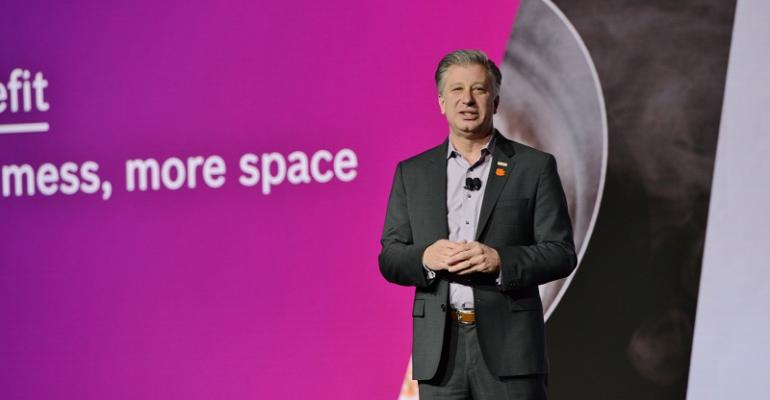 Company President Mike Mansuetti says he was in Washington a week ago to join automotive-parts-making lobbyists for a legislative summit to share trade concerns with federal lawmakers.

PLYMOUTH, MI – Bosch North America President Mike Mansuetti forecasts subdued growth for the diversified global industrialist in 2019 after a record-setting year-ago, and he says the company is working to further tariff-proof itself as trade tensions heighten between the U.S. and China.

“We see Europe going down, China cooling down and the overall volume development of vehicles tapering off, so we’ll see a more subdued picture in 2019,” says Mansuetti, whose German parent group Bosch Group booked a record $92.7 billion in global sales last year across its various divisions.

Bosch North America contributed an all-time high $14.5 billion in revenue, up 6% over 2018 with its automotive business, or mobility solutions, accounting for $9.5 billion and 66% of its overall business.

“In North America we still see that we will continue to grow, maybe not as much,” he says. “But overall, we see a reflection of the global picture. We see a little cooling down here, as well.”

Sales were not the only element of growth at Bosch N.A. last year. On the automotive side, it expanded mobility solutions plants in Charleston and Anderson, SC, which make a variety of parts and sensors. It also is investing $120 million into a new plant in Celaya, Guanajuato, Mexico, to make electronic control units, or ECUs, to satisfy the booming connected-mobility market.

As new players enter the automotive business, including ride-hailers such as Uber, Bosch is adding their business to its roster of traditional OEM customers, Mansuetti says.

“We’re growing both in the core (business) and in some of the future technologies, as we look to the automation of vehicles,” he says.

“We see strong growth in our driver-assistance, for example, and also on the powertrain side as we continue to offer a wide variety of solutions” for fuel economy and emissions improvements, Mansuetti says.

But against this backdrop, the U.S. continues to escalate tariffs, including a hefty tax last year on imported steel and aluminum that drove up material costs for manufacturers.

The evening before Mansuetti delivered his remarks to journalists at the supplier’s recently expanded technical center here, the Trump Admin. raised duties on $200 billion of Chinese imports to 25% from 10% because it believes the nation unfairly pressures American companies to transfer technology and intellectual property.

China responded by raising tariffs on $60 billion of U.S. goods reaching its shores. The increase to 25% is up from 10% and 5% previously.

“I hope they got everything on the boat yesterday,” Mansuetti jokes.

However, Mansuetti notes Bosch’s approach historically has been to build where it sells, or “local-for-local” as he calls it, to protect itself from tariff fluctuations. The Celaya plant is one example, he says.

“We have not changed our strategy of local-for-local,” he says, adding that the company continues to monitor the U.S.-China spat nonetheless. “It is an impact for us. We are utilizing some of the tools available to us through the exclusion process.”

The Office of the U.S. Trade Representative makes the determination on product exclusion requests and, if granted, they stand for one year.

“We’ve filed many exclusions, not only on steel and aluminum but also looking into that on the 301,” he says, referring to the section of trade laws directly targeting Chinese tech transfer and IP. “That has been, quite frankly, a cumbersome process getting through those exclusions. We have been successful on a few incidents, and we continue to move forward. We continue to localize.”

Mansuetti, who joined Bosch in 1988 and has served as its North America chief since 2012, says he was in Washington a week ago to join automotive-parts-making lobbyists for a legislative summit to share trade concerns with federal lawmakers.

Looking ahead in North America, Mansuetti says Bosch will continue to focus on growing its core business, cross-selling between its various business units in fields such as sensors and making strategic acquisitions along the line of its strategic investment last year in Mojio.

Bosch also wants to fuel innovation internally, Mansuetti says, by further developing an adaptive space where entrepreneurial employees can move their innovations forward. The adaptive space is particularly helpful in the company’s digitalization effort, which would include its data-driven products in the Industry 4.0 space, the Internet of Things and its internal operations.