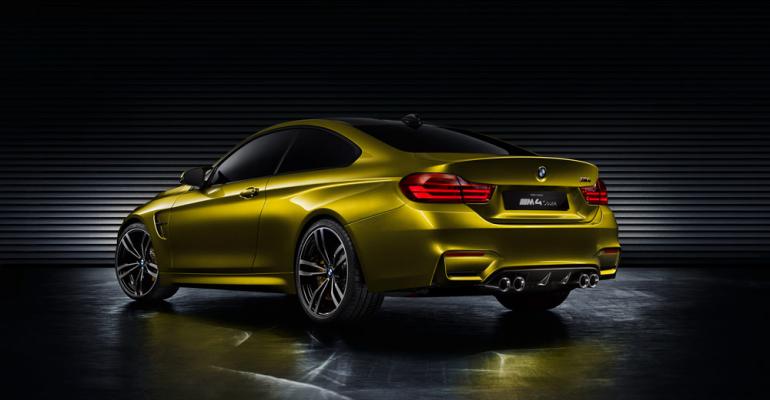 The reveal of the high-performance model follows the German auto maker&rsquo;s forthcoming launch of its 4-Series coupe, which debuted at the Detroit auto show earlier this year.

The reveal follows the German auto maker’s forthcoming launch of its 4-Series coupe, which debuted at the Detroit auto show earlier this year

Engineered by BMW’s M performance division, the auto maker promises “motor racing genes” with “unrestricted everyday sustainability.” It follows the tradition of the long-running M3, one of the auto maker’s most recognized performance vehicles.

Like other M models, the M4 concept presents a more agile stance than its lower-end counterparts, including a lower profile, larger air inlets, darker accents and a beefier rear fascia. A restyled M-Series gill, long a hallmark of M vehicles, makes its debut on the concept.

“At BMW M, design is above all an expression of function. Each design element is based on the underlying technical demands of the BMW M high performance concept,” Adrian van Hoonydonk, head-BMW design, says in a news release.

“Thanks to this authenticity, the design provides a taste of what can be experienced with each model: Power, precise control and superior handling – an unforgettable driving experience on the racetrack as well as on the road.”