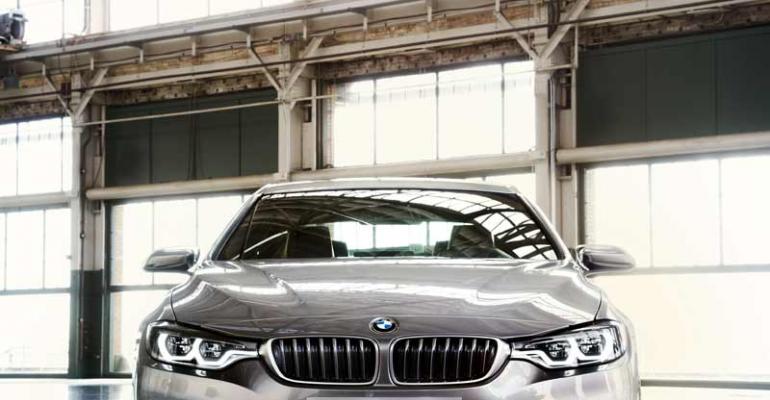 BMW Takes It Up a Notch and a Number

A larger all-new 4-Series Coupe will replace the 3-Series coupe this year.

DETROIT – First, BMW executives laud the brand’s 3-Series line, noting it accounts for about half of the luxury German auto maker’s U.S. sales.

Then they introduce the 4-Series concept coupe, a production version of which will replace the 3-Series coupe later this year.

The concept unveiled at the North American International Auto Show here is wider, longer and more athletic-looking than the existing 3-Series coupe that’s been around since 1991.

“This concept probably is 90% representative of what the 4-Series coupe will look like,” Paul Ferraiolo, BMW North America’s head of product planning-strategy, tells WardsAuto.

If the old question asks what is in a name, in this case it is what’s in a number. Considering the 3-Series’ brand strength, some people wonder if it makes sense to change the number for the upcoming coupe. “BMW is taking a gamble,” says Jesse Toprak, a TrueCar.com senior analyst.

Adds Eric Lyman, vice president-editorial for ALG, a lease-residual setting firm: “A rose is a rose, but BMW is taking a big risk in ditching the 3-Series name on the coupe and convertible variants.

“If consumers don’t make the connection, residual values could suffer as a result, putting more pressure on BMW in the increasingly competitive premium midsize segment that has experienced growth in coupe variants.”

BMW knows of the risks. “We fully understand that,” Ferraiolo says at the concept car’s unveiling. “But this car is substantially bigger (than the current 3-Series coupe). There is a lot more visual differentiation.

“If you just hear about it or read about it, you might not get it,” he says of the new vehicle and name change. “But when you see this car, you start to understand why the 4-Series nomenclature makes sense.”

BMW says it is built on the tradition of the 6-Series and 8-Series coupes.

The coupe concept “is like no vehicle we’ve created,” says Ian Robertson, a member of the BMW board of management-sales and marketing. “It has a truly unique combination of presence, elegance and dynamics.”

Distinguishing features include hexagonal headlights, a low roofline and a grille that is closed off to enhance aerodynamics. Also featured is satin-finish trim on air intakes, vents, side mirrors and door handles.

“Clearly the 3-Series is a very important product for us, but it makes sense as well to add a 4-Series because this car is so different,” Robertson says on the sidelines after the auto show unveiling.

Toprak has no reservations about the expected quality of the marketbound coupe. “The 4-Series will be the cream of the crop in its class.”

The 3-Series sedan keeps its current numeral. It has been a lucky one for BMW, the No.1 luxury-car brand in the U.S.

“BMW created an icon when the 3-Series sedan was introduced to the world,” Robertson says. The sedan debuted in 1975, the same year BMW opened its North American unit.

Also debuting at the Detroit show is the latest version of the 560-hp BMW M6 Gran Coupe. The performance car features a V-8 engine, twin-turbo technology and 7-speed double-clutch transmission.