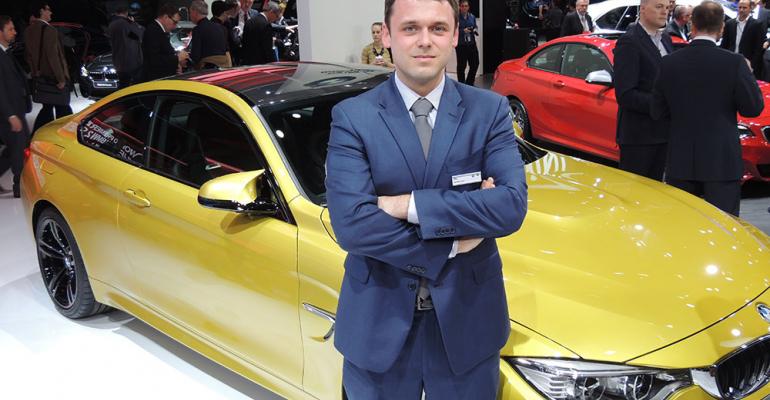 Going on sale this summer, the all-new &rsquo;15 M3 and M4 reflect BMW&rsquo;s eager embrace of carbon fiber as a lightweight material that can be decorative as well as structural.

DETROIT – Leave it to BMW to replace its excellent 4.0L V-8 in the fourth-generation M3 with a twin-turbo inline 6-cyl. in the all-new, fifth-generation M3 sedan and M4 coupe that trumps the V-8 with 38% more torque while being 25% more fuel-efficient.

BMW executives say the V-8 could have carried over to the new M3/M4. “It was really a revered engine,” says Victor LeLeu, 3-Series product manager for BMW of North America. “People loved it so much over the years, no one would have blamed us if the V-8 stayed in the lineup.

The new 6-cyl., along with numerous applications of carbon-fiber and aluminum components, helps the M3/M4 shed 180 lbs. (82 kg) compared with the previous M3.

“These are the first M cars that actually dropped weight from one generation to another,” LeLeu tells WardsAuto.

Two mono-scroll turbochargers split their duties, with each one feeding three separate cylinders – similar in concept to the recent N54 twin-turbo 3.0L I-6, a Ward’s 10 Best Engines winner.

LeLeu says the new M3/M4 reinforce the notion that a high-performance coupe or sedan also should be pleasant to drive in casual situations.

“By switching to this particular engine setup, we are maximizing the potential to use the car every day,” he says. “But as soon as you want to take it to the track, it will be right at home there, too.”

The cars reflect BMW’s eager embrace of carbon fiber as a lightweight material that can be decorative as well as structural. BMW owns a share of a carbon-fiber plant in Moses Lake, WA, that is supplying massive amounts of the material for the automaker’s i3 electric vehicle and forthcoming i8 plug-in hybrid.

The roof of both the M3 and M4 is carbon fiber, as is the 1-piece driveshaft and the strut brace, which is visible when the hood is raised.

“This whole piece weighs only 3.3 lbs. (1.5 kg), but it stiffens the car so much,” LeLeu says of the strut reinforcement. “It helps with the precision of the front end.” The trunk lid is a mixture of carbon fiber and plastic, and the hood is aluminum.

Another example of weight savings can be seen in the transmission. The all-new 6-speed manual is 26 lbs. (11.8 kg) lighter than the previous gearbox. A 7-speed dual-clutch transmission is optional in the new cars. The previous M3 also offered a 6-speed manual and 7-speed DCT; the DCT was more popular globally.

The battery is 30 lbs. (13.6 kg) lighter because of a switch from lead-acid to lithium-ion chemistry, a decision that saves space as well. Another fuel-saving technology is electric power steering, used for the first time on the M3.

The cars’ interiors reflect the overall styling language found in the standard 3-Series sedan and 4-Series coupe, although the new M3/M4 feature carbon-fiber trim, unique instrumentation and paddle shifters that are longer to provide better grip.

Seats are more aggressively bolstered, and the back seats fold nearly flat thanks to a frame that now is 30% fiberglass. “Any place they could shed some weight, they did,” LeLeu says.

Historically, M3 sales skewed in favor of coupes, which have outsold sedans by a 2-to-1 margin, says LeLeu, who expects the trend to continue with the M3/M4.

BMW hatched the idea of a high-performance M3 28 years ago in Munich, and it was only a matter of months before the first vehicle was in production.

The M4 coupe will be assembled in Munich, while M3 sedans will come from the Regensburg, Germany, plant, which has produced 222,293 second-, third- and fourth-generations M3s since 1992.

BMW board member Ian Robertson says the M3/M4 serve as a proper “bookend” to the i3 and i8, which represent the more fuel-efficient side of the brand. “This really shows you the breadth of our position now,” he tells journalists here.

To date, Robertson says BMW has sold 11,000 i3 EVs in other markets, “and we haven’t even opened the order board in the U.S. yet.”