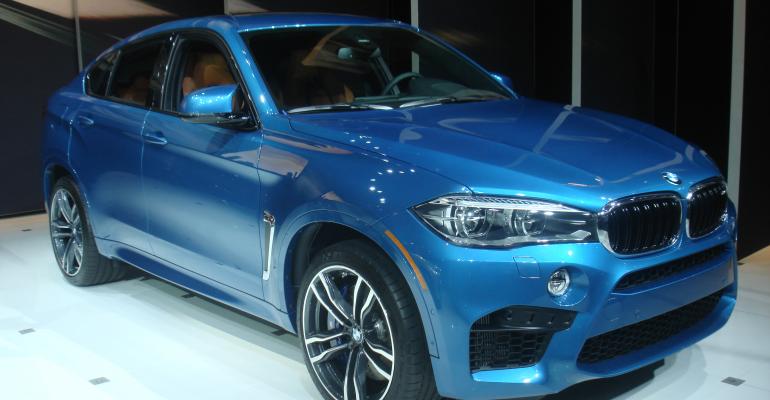 BMW says the new M TwinPower Turbo engines for the X5 M and BMW X6 M are the most powerful unit ever developed by the automaker for an AWD vehicle.

The previous generations of the X5 M and X6 M rolled into Southern California in 2009, the first all-wheel-drive vehicles in BMW’s X-Series.

Both of the newly unveiled models, each with BMW’s standard 8-speed M Steptronic transmission, can jump from 0-60 mph (62 km/h) in 4.2 seconds.

“M stands for emotional, high-performance sports cars, and for more than 40 years BMW M has helped shape the unique DNA of BMW,” announces BMW Group board member Ian Robertson after the two models rumble onto the stage from behind a garage door-like partition. “Both models combine the pure-blooded high performance of BMW M with everyday usability of BMW X family vehicles.”

BMW says the new M TwinPower Turbo engines for the X5 M and BMW X6 M are the most powerful units ever developed by the automaker for an AWD vehicle.

The turbo technology is augmented in the two models with a pair of twin-scroll turbochargers, cross-bank exhaust manifolds, Valvetronic variable valve control and High Precision Direct Petrol Injection. Meanwhile, the 4.4L V-8 in each vehicle produces a maximum output of 575 hp between 6,000 and 6,500 rpm, a 4% increase over the predecessor models.

BMW redesigned the X5 M and X6 M with their sporting options in mind, with each model casting a low-slung figure on the road.

New BMW X5 M and BMW X6 M customers will be able to choose among various options exclusive to the M models, such as Merino full-leather trim and M multifunction seats.

“The customers here in the United States really appreciate the M vehicles,” Robertson says, noting at least one of every three M vehicles worldwide is sold in the country.

From emotional high-performance rides “to zero-emission urban mobility...with our many new products, we are well on track to achieve the target of selling more than 2 million vehicles worldwide this year, a first in our history,” he says.

The successor to the BMW 1-Series Convertible, the 2-Series, set for product launch in February, has been reworked to offer even more elegant, athletic and assertive lines, along with improved sprinting ability, agility and efficiency. It also offers greater ride comfort, improved functionality and innovative equipment features.

The electrically operated soft-top of the 2-Series Convertible can be opened and closed in about 20 seconds, even while driving at speeds up to 31 mph (50 km/h).