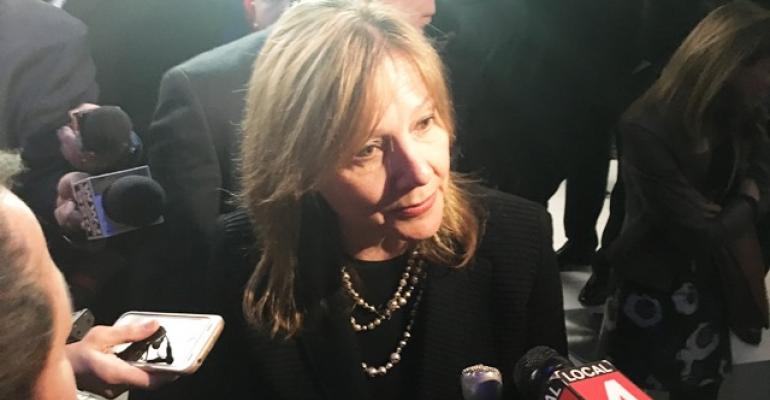 DETROIT – General Motors Chairman and CEO Mary Barra says the automaker does not intend to move production of the Chevrolet Cruze Hatch after President-elect Donald Trump threatened tariffs on the car, which is built in Mexico and imported to the U.S.

“No, we have a plan,” Barra tells journalists at the North American International Auto Show. “This is a long-lead business with capital-intensive investments (and) decisions that were made two, three, four years ago.”

After spending his campaign attacking Ford for plans to build a $1.6 billion assembly plant in Mexico for small-car production, an outlay the automaker last week redirected to Michigan, Trump set his social-media sights on GM for shipping some globally built units of the all-new Cruze hatchback to the U.S. from Mexico.

An estimated 4,500 Cruze hatchback were sold in the U.S. last year, a variant of GM’s top-selling global car executives wanted to bring to the U.S. years ago but could not because of financial constraints.

“Good business decisions are done over time and not in a tweet,” U.S. Sen. Debbie Stabenow (D-MI) tells WardsAuto. Stabenow takes it a step further, calling for Republican Trump to bring production of some of his U.S.-sold products made overseas to America.

U.S. Sen. Gary Peters (D-MI) says Trump’s criticism of Ford and GM, as well as Toyota in recent days, puts a spotlight on a controversial issue that must be examined after the incoming president takes office.

“We need to look at our trade policies,” says Peters, who like Trump opposes international trade pacts such as TPP and NAFTA.

Barra, who earlier this month was appointed to Trump’s economic and job-creation council, says it is unclear whether GM will be taxed for importing the hatchback after Trump takes office Jan. 20.

“It’s way too early to speculate,” she says. “There’s a lot of work to do, but when we look at some of the things (Trump) has said, we have much more in common than we have different.

“I very much look forward to being part of the solution that allows the country to be strengthened, along with business and our manufacturing capability,” she says.

Stabenow says of the prospect of working the Trump Admin.: “We’ll look for the smartest way to support jobs in the U.S.”

However, Barra makes it clear her work with Trump will not be daily fodder for social, or traditional, media. She also has a Twitter account, as well as a Facebook page.

“Every time I have a conversation, I’m not going to report out on it,” she says. “Safe to assume, a company of our size, with the significant number of jobs GM provides in the United States, our staff is talking to his staff and the communication is ongoing.”