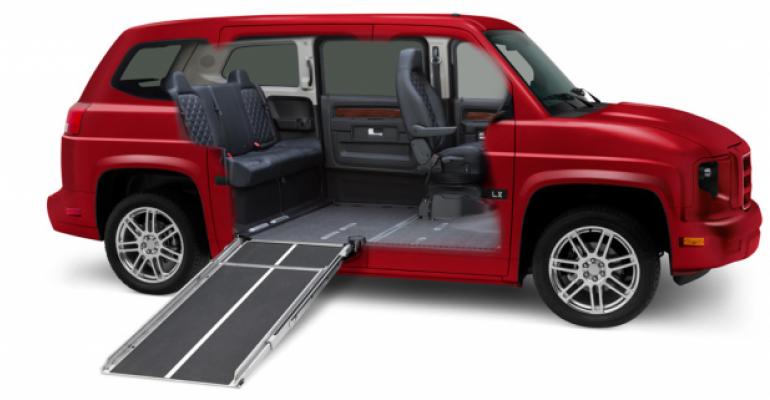 Back From Brink, Growth Eyed for Unique MV-1

Producer Mobility Ventures says about 4,000 of the vehicles are in circulation, so its projections for 2,000-2,200 sales this year would mean a serious boost in MV-1 population.

Reborn, retooled and re-energized, Mobility Ventures – the leading producer of purpose-built vehicles for wheelchair users – believes it is very much back on track.

Formed from the ashes of a bankrupt Vehicle Production Group, the company that originally designed and engineered the specialty MV-1 model, Mobility Ventures once again is looking to expand its dealer network and product line, move into international markets and offer new ways for customers to get into its wheelchair-accessible vehicle.

The high-profile, body-on-frame MV-1 is powered by a 275-hp Ford 3.7L V-6 mated to a 6-speed automatic transmission, an upgrade from the original 248-hp Ford 4.6L V-8/4-speed automatic combination. It seats up to three passengers along its rear bench seat, plus a fourth in an optional small rear-facing jump seat that folds down from the back of the driver’s chair.

There is no front passenger seat, leaving the spot open for a rider in a wheelchair, which can be secured with the customized mounts integrated into the vehicle floor. Additional mounts allow a wheelchair to be secured in front of the second-row bench as well.

Wheelchairs enter through an extra-wide, hinged, passenger-side rear door, where a motorized ramp deploys at a choice of two lengths, allowing for a less-severe approach angle where space permits. The rear door and ramp now open automatically with a push of a key-fob button, an enhancement made since the model’s relaunch in 2014.

Production of the MV-1 began in September 2011 in Mishawaka, IN, under an arrangement with plant owner AM General. The facility, once home to the General Motors Hummer H2, had been idled by the demise of the Hummer brand, and the MV-1 project was considered Mishawaka’s shot at a second life as a contract manufacturer.

Output ended in February 2013 when VPG ran out of cash, failing to meet minimum conditions of a $50 million Department of Energy loan counted on to finance operations. Backed by private-equity firm Mac Andrews & Forbes Holdings, AM General acquired the VPG assets and restarted production in March 2014.

Since then, the newly emerged Mobility Ventures has been making small improvements to the MV-1, adding a power-operated side door, side-curtain airbags and expanding the color palette, while at the same time re-energizing its sales efforts.

The automaker says about 4,000 of its vehicles are in circulation, so its projections for 2,000-2,200 sales this year would mean a serious boost in MV-1 population. More growth is expected beyond that, but targets are set at seemingly achievable levels.

“We’re probably talking 5,000-6,000 (sales annually) five years from now,” says Executive Vice President Pat Kemp, a retired GM veteran of 33 years who joined the company in January as it was being molded from the assets of the former VPG.

“I don’t want to say some pie-in-the-sky (forecast),” he adds, noting the reborn operation still is trying to find its footing. “Basically, we (were equivalent to) a startup when I came in.”

Kemp estimates the market for new wheelchair-accessible vehicles at about 15,000 units per year in the U.S. alone. More opportunities exist in the seemingly wide-open markets outside North America and in the used-vehicle sector, provided Mobility Ventures can build up from scratch a certified-pre-owned and leasing business.

“International has some of the best opportunities for growth, the Middle East, Canada, even in Asia,” he says “So we haven’t even dented those yet.”

Kemp says the company will seek deals with local distributors outside the U.S., and sees Taiwan, in part serving as a gateway to a much bigger market in mainland China, as a most likely first target outside North America.

Mobility Ventures has about 80 dealers selling the MV-1 in nearly 35 U.S. states, covering most major metro markets, plus a handful in Canada, but the company wants to expand its reach in those markets as well.

“If you know what you’re doing in this space, you can be successful.”

Leasing is a critical component in the automaker’s expansion drive, but first it must establish a residual-value track record for lenders. Once in place, those returning leased vehicles will become inventory for a CPO program that will allow its dealer network to offer high-quality used MV-1s to buyers who can’t afford new.

“Do we have anything yet? No,” Kemp says of leasing and CPO programs. “But check back in about six months.”

About half of MV-1 sales are to government transit agencies. About 20%-25% are purchased by individual buyers and the remainder goes to commercial customers such as taxi fleets and managed-care providers. Prices start at $39,800 for the SE model and base at $56,995 for a top-of-the-line LX.

Mobility Ventures sells a factory-built CNG-fueled version of the MV-1, a requirement of the original DOE loans and an option Kemp says is popular in California. The automaker plans to continue with the offering, but may move the CNG work to an outfitter.

“We intend to stay in the CNG business,” he says. “Sooner or later gas prices will go up and the demand will go stronger to CNG. It’s another thing that makes us unique.”

The company also is exploring a couple of additional alternative-powertrain options, expected to be available within the next few years.

“We’re a very innovative company, when you think about it,” Kemp says, without tipping his hand at potential powertrain directions.

The Mishawaka plant has straight-time capacity for 65,000-70,000 MV-1s annually. In addition to the Mobility Ventures vehicle, the facility has been cranking out Mercedes R-Class CUVs annually for the Chinese market since August.

Mercedes-parent Daimler contracted AM General for the production when it stopped selling the R-Class in the U.S. and wanted to make room at its Vance, AL, plant for its more popular GLE and GLS CUVs. AM General is looking for additional contract-assembly work, but nothing appears on the horizon.

Meanwhile, there are plans for additional updates to the MV-1, among them a power liftgate, updated sound system and LED headlamps, though timing is uncertain and Kemp notes it’s more important right now to “just get (the vehicle) out there.

“Our challenge is building our awareness,” he says. “What is Mobility Ventures? More importantly, what is the MV-1? As more and more people become aware of it, we can have other opportunities to sell our vehicle.”