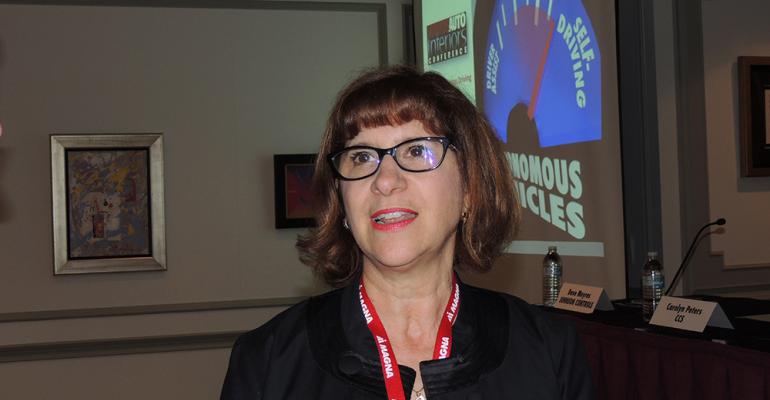 Game playing, relaxing and talking with family are all scenarios seen with the adoption of autonomous vehicles.

DEARBORN, MI – Autonomous vehicles present myriad opportunities for drivers, passengers and the industry alike when it comes to enjoying and differentiating cabin space.

Panelists here at an autonomous-interiors session at the 2014 WardsAuto Interiors Conference point out how much time drivers will be able to recapture when they don’t have to pay attention to driving.

Johnson Controls forecasts 80%-90% of the task of driving will be automated by 2025, says Dave Muyres, executive director-global product innovation for JCI.

“You now have 80% of the time to do something else that’s going to happen in the interior – that’s why we believe the interior is going to play such a key role (in autonomous vehicles),” Muyres says. “The interior experience is how you’ll differentiate the car and satisfy consumers.”

Without the need to pay attention to the road, says Jeevak Badve, vice president-strategic growth for consultancy Sundberg & Ferar, drivers and passengers will be able to enjoy some of the same activities they do outside the car: eat and drink, play games, read, listen to music and work.

But a student designer of Carolyn Peters’ at the College for Creative Studies in Detroit sees people being able to do something they don’t much do anymore: connect with family.

“Family time would be extended beyond boundaries of the house,” Peters, associate professor at the design school, tells attendees. “Instead of driving, parents and caregivers can focus on children.”

Seats in the student’s autonomous-vehicle interior concept swivel so all occupants can face one another, and seasonal plants decorate the cabin.

Another student concept Peters shares floats the notion of a basic physical interior with the ability for virtual change, “where the materials can be what you want them to be.”

Images of a variety of interior looks, with cloth or leather seating, wood or metallic trim, light colors for summer, dark colors for winter, would be stored on a downloadable smartphone app and projected onto a physical surface.

“But as more and more vehicles start to talk to each other, you’ll be able to be in any position and still be safe,” he says.

J.D. Power notes an increasing willingness to own and use an autonomous vehicle, with its most recent 2014 survey of Americans showing 24% of respondents interested in an autonomous-driving mode, up from 21% in 2013.

Fix Potholes, Then Let’s Talk About High-Tech Roadways for Autonomous Cars
May 08, 2014