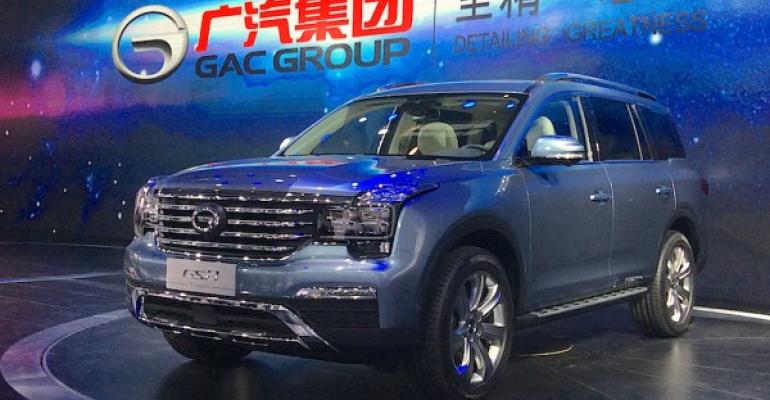 Annual sales in China are forecast to plateau at about 30 million in five or six years. SUV and luxury sales could level off sooner. When that happens, automakers may lack models in other segments of a highly competitive market, analyst Keith Lomason says.

BEIJING – There is a lot of commotion these days surrounding China’s auto market and its future in a slowing economy. But the mood at last month’s Beijing auto show was upbeat. Automakers remain confident there are plenty of sales to be had there.

“Despite all the headlines about the turmoil, the market continues to grow, and grow fast,” Lars Danielsson, senior vice president-Asia-Pacific for Volvo Cars tells WardsAuto.

To be sure, China’s auto-market growth is outpacing those of many developed markets. But like some mature markets, such as the U.S., China’s growth is not evenly distributed.

Growth in China mainly is being driven by SUVs and luxury vehicles. With analysts not seeing that as an immediate problem, automakers are racing to add models in those segments.

“It is not dangerous yet,” says Keith Lomason, China president for market researcher JATO Dynamics. “Those two segments can keep the market growing at 4% to 6%.”

However, the entire market likely will reach a saturation point in three to five years, he says. “Who knows what segments will be hot at that time?”

Sales of passenger vehicles in China in the first four months of 2016, including SUVs, rose 6.8% from prior-year to 7.45 million units, according to the China Association of Automobile Manufacturers. The market is expected to grow at least 5% for the full year.

Volvo’s business in China mirrors those trends. Its sales grew 13.4% year-over-year to 19,636 in the first quarter. Its best-seller was the XC60 small SUV, which benefited by also slotting in the luxury segment. It was followed by the S60L, a longer version of the S60 sedan produced in China with more rear legroom and second-row amenities.

General Motors says SUVs accounted for 13% of its China sales in 2015 compared with 5.6% in 2014. In the luxury segment, Cadillac sales grew 17% last year. But its mainstream Chevrolet brand, short on SUVs in its lineup, saw sales fall 9.7%.

GM doesn’t seem to have any problem with the lack of diversity in segment growth. It plans for some 40% of its new and refreshed models in China through 2020 to be SUVs and multipurpose vehicles, including some luxury SUVs.

“We will continue to focus on the segments where the demand is strong and growing,” GM China President Matt Tsien says.

Ford is equally focused. In the first four months of 2016, its sales of SUVs in China rose 27% to more than 100,000. It introduced two new SUVs at the Beijing show. Sales of its luxury Lincoln brand increased threefold in January through April.

Half of the Lincoln models in China are SUVs. But Ford isn’t worried about its dependence on SUVs for boosting sales, says a Ford China spokesperson.

“We are enthusiastic that Chinese consumers are so responsive to SUVs,” she says via email. “As demand for SUVs continues to grow, so will the range that we offer.”

There are potential problems on the horizon, however. Though fast-growing, SUVs are not the largest segment in China, and luxury vehicles are almost a niche.

Annual sales in China are forecast to plateau at about 30 million units in five or six years. SUV and luxury sales could level off sooner. When that happens, automakers will face an extremely competitive market and a potential lack of models to address growth in other segments, says JATO’s Lomason.

“It’s a crapshoot, isn’t it?” he says. “Who knows what segments will be hot at that time?”

Of course, sales may continue to rise for longer than five or six years. Consultancy McKinsey sees the overall market growing about 5% for the next decade. The luxury and SUV segments will grow faster than the overall market during that time, senior partner Paul Gao tells WardsAuto.

“There is nothing wrong with catching the wave of Chinese SUV and luxury growth, as long as OEMs do not become dependent on the Chinese market only,” he says.

That is why automakers in China are producing electric vehicles despite the lack of enthusiasm among Chinese consumers. Automakers with SUV-heavy portfolios may have trouble accumulating sufficient credits, says Zhu.

But, “if you ignore the (emissions-credits) angle, then SUVs will keep going” he says. “It’s what the consumer increasingly wants.”