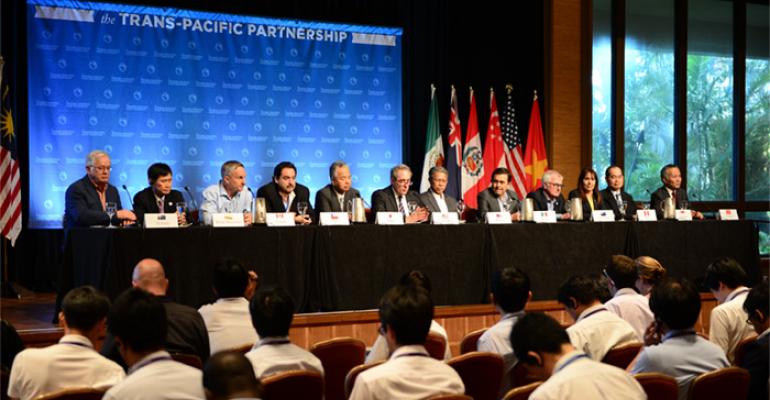 Automakers Ponder Plan B as Trump Vows to Quit TPP

Reflecting Japanese automakers&rsquo; concerns about the president-elect&rsquo;s opposition to the trade deal, a Mazda spokeswoman says, &ldquo;Trump will not become president until into the New Year and we do not fully understand all his policies, so we are waiting to have a better grasp of the situation after he is inaugurated.&rdquo;

TOKYO – The promise by President-Elect Donald Trump to withdraw the U.S. from the Trans-Pacific Partnership trade agreement on his first day in office is generating widespread anxiety within the global automobile industry.

His rejection of the deal could scupper an agreement negotiated over five years and signed in February by the U.S., Australia, Brunei, Canada, Chile, Japan, Malaysia, Mexico, New Zealand, Peru, Singapore and Vietnam. Each country has up to two years to ratify the deal before it can take effect.

In Japan, Prime Minister Shinzo Abe has warned that without the U.S., “the TPP would be meaningless.”

However, automakers in his country have been cautious about declaring the deal is dead in light of the president-elect’s comments. Some say that despite Trump’s promise, they hope he might change his mind.

“Trump will not become president until into the New Year and we do not fully understand all his policies, so we are waiting to have a better grasp of the situation after he is inaugurated,” Mazda spokesman Hideki Taira tells WardsAuto.

“We are not sure whether he will keep to the plans that he expressed during the election campaign,” Honda spokeswoman Sanae Tanaka adds. “We have not confirmed our future strategies, as it is not clear what the new American administration will do. We will watch carefully what happens.”

Another industry insider, speaking on condition of anonymity, says TPP “was something that as an industry we believed would be good for Japanese cars and it was something that most companies here were fairly vocally in favor of.”

But the source says these same automakers do not want to say anything perceived as being critical of a president who has yet to assume office.

“They don’t want to say anything because they are worried about the impact on their business,” the source says, suggesting there are concerns in the Japanese auto industry that the sector could be the target of policies designed to protect the domestic U.S. industry.

In neighboring Canada Abe’s comments are distressing, given that access to the Japanese market is what the Canadian auto sector really wants from the TPP, as trade relations with the U.S. already are solid under NAFTA. But NAFTA also could be renegotiated or scrapped by Trump, who has called it “the worst trade deal in history.”

“The reality is that both the U.S. and Japan have vetoes over the TPP, so if one of them doesn’t support the agreement, then it doesn’t move forward,” says President David C. Adams of the Global Automakers of Canada, an industry association. “If President-Elect Trump continues with his declaration that he’s going to pull the U.S. out of the TPP then the agreement is effectively dead.”

Should the TPP die, the Canadian government should act quickly to strike a replacement deal that at least covers Japan, he says.

In Europe, Matthias Wissmann, president of the German Association of the Automotive Industry, says, “There is reason to fear that under the new president the U.S., just like China, will concentrate most of all on its own economy – to the detriment of international relations and trade flows.”

Wissmann also is on record as saying Europe must continue negotiating deals with TPP member countries to help the region compete. He cites the bilateral deal the EU has struck with Vietnam and notes talks with Japan are ongoing.

David Bailey, an auto-sector expert at the U.K.’s Aston University, says bilateral deals such as the one between the EU and Vietnam could give Europe a competitive advantage should TPP collapse.

The Paris-based International Organization of Motor Vehicle Manufacturers (OICA) is not commenting on Trump’s statements because it does not deal with specific trade agreements. But a spokesperson tells WardsAuto: “From an OICA point of view as a global industry we are in favor of open and free trade. Whatever opens the market to something we can support. Whatever closes the market we cannot support.”

For OICA, open markets and free trade are vital because “for a global industry functioning in a global world, trade barriers do not work,” he says.

While the trade organization can understand governments wanting to protect their industries, protectionism is a “double-sided knife” that can invite retaliatory protectionism from the other side. “Ultimately it’s a lose-lose situation, and I prefer a win-win situation,” the spokesperson says.

– with Mandy Kovacs in Ottawa, Sara Lewis in Brussels and Andrew Burnyeat in Brighton, U.K.