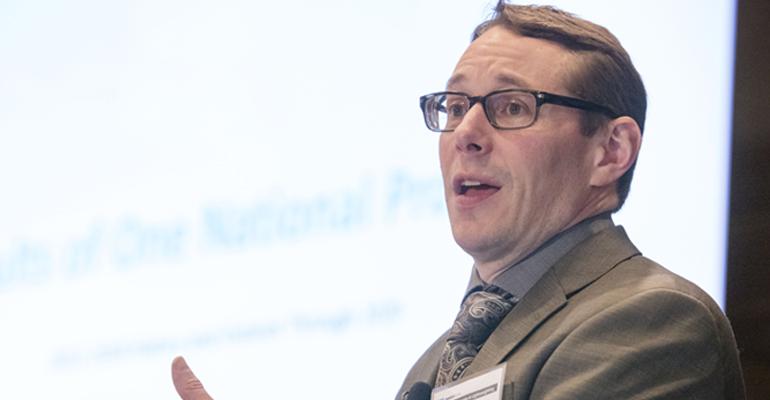 Overall U.S. automakers have improved fleet fuel economy 9% since 2012, but that falls short of the 15% gain they needed to be on track to hit the 2025 standard.

BIRMINGHAM, MI – The Alliance of Automobile Manufacturers makes its case here for a new set of fuel-economy standards that land in the middle ground between the Trump Admin.’s proposal to relax the federal CAFE targets and California’s drive to maintain them unchanged.

Current CAFE targets set in 2012 call for U.S. cars and trucks to average about 46.8 mpg (5.0 L/100 km) in 2025, but automakers are falling well short of the pace to achieve that bogey, Michael Hartrick, director-Fuel Economy and Climate for the AAM, tells attendees of a WardsAuto conference on Fuel Economy & Lightweighting here.

Overall, automakers have improved U.S. CAFE 9% to 33.6 mpg (6.7 L/100 km) since 2012, he says, a decent gain despite a market shift that has consumers favoring trucks and CUVs over more fuel-efficient cars. The improvement also has been achieved in a time of low gasoline prices at the pump, which has buyers opting for bigger, more powerful and thirsty engines over the period.

Over that same period, fuel-economy targets increased 15%, well beyond that actual 9% performance gain, and Hartrick says this is the first time in CAFE history that the entire industry on average is failing to keep pace with the regulatory targets.

“It’s not just certain (manufacturers) that are missing the targets,” he says. “And the industry probably will not be able to catch up to the standards near term.

“Manufacturers are burning through credits right now,” he adds.

The current CAFE debate – heated in some cases – is nothing unusual, Hartrick says, pointing out fuel-economy targets were equally controversial leading up to the 2012 deal to reconcile California and federal standards.

“What we’re going through today is normal,” he says.

The Trump Admin. proposal is to lock CAFE targets in at the 2020 rate, roughly 37 mpg (L/100 km), while California is committed to protecting current targets and continuing to promote zero-emission vehicles.

The AAM, which represents 12 automakers, including General Motors, Ford and the U.S. arms of Fiat Chrysler Automobiles, Toyota, BMW, Mercedes-Benz and Volkswagen, is calling for continued annual increases in CAFE requirements, but with those targets set more realistically, taking into account the U.S. market’s shift toward less fuel-efficient CUVs and powertrains, low fuel prices and the financial pressures the industry is under.

“The Alliance doesn’t support a flat standard,” Hartrick says. “We support some increase year to year. We want a little more recognition of economic realities. It’s easy from a regulatory perspective to say add X, Y and Z technologies, but manufacturers have to balance that with all the other things (they have to do) and do it affordably.”

The AAM official says it is important to recognize the Trump Admin. plan is just a proposal at this point and not set in stone.

“Things can still change,” he says, noting negotiations between the California Air Resources Board and the EPA and NHTSA continue. “(California is) still talking to the federal government, so that gives me hope something can happen.”

Whatever happens in this latest round of CAFE debate, it won’t be the end of the story, Hartrick says.

“You look at (the higher) environmental goals of some of these states and other nations (and) the U.S. may swing back that way under another administration,” he says. “We think fuel economy will get higher and standards will get higher – it’s just a matter of when, and how do you do that in a sustainable way.”