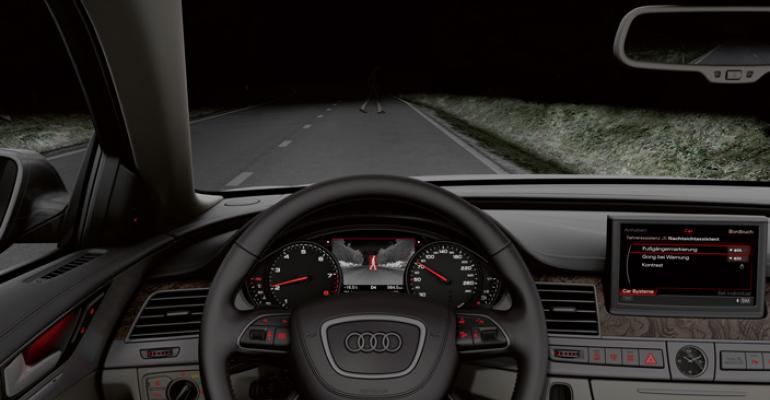 Currently available only in a handful of imported premium models, Autoliv believes the take rate on the technology will increase significantly. Only 80,000 units were sold globally in 2014, primarily in the U.S., Europe and China.

Currently available only in a handful of imported premium models, Autoliv believes the take rate on the technology will increase significantly. Only 80,000 units were sold globally in 2014, primarily in the U.S., Europe and China. Despite this limited growth, Autoliv predicts night-vision sales might jump to 300,000 units by the end of the decade.

That number could be even higher, says Richard Seoane, Autoliv Electronics general manager-night vision. “It could be a lot more if autonomous vehicles launch in the retail market,” he says.

Today, night vision is standard only on the super-premium Mercedes-Benz Maybach. Audi, BMW and Mercedes offer the technology as an option on select models, including the Audi A6, A7, A8 and Q7; the BMW 5-Series, 6-Series, 7-Series, X5 and X6; BMW-owned Rolls-Royce’s Ghost and Wraith models; and Mercedes’ S-Class, including the SL roadster.

Seoane says night vision costs $2,200 to $2,600, depending on the manufacturer. He says an additional brand, which he declines to identity, will launch the feature later this year, followed in 2016 by two additional European brands. One will be a mid-level-priced car, the first non-luxury model to offer night vision.

Autoliv’s current night-vision technology is in its third generation. “We’ve reduced the cost 50% from the previous generation,” Seaone says. The fourth generation is in development now but won’t debut for another three years.

The technology “sees” thermal images of pedestrians and animals as far as 150 ft. (46 m) in front of the car, about three times further than headlamps illuminate the road ahead. Autoliv’s sensors function in smoke, sand and fog if it is not too dense.

Night vision could make a significant contribution in reducing the number of fatal collisions with pedestrians and animals. Autoliv’s challenge is to create compelling marketing to convince more motorists of the advantages the technology offers.