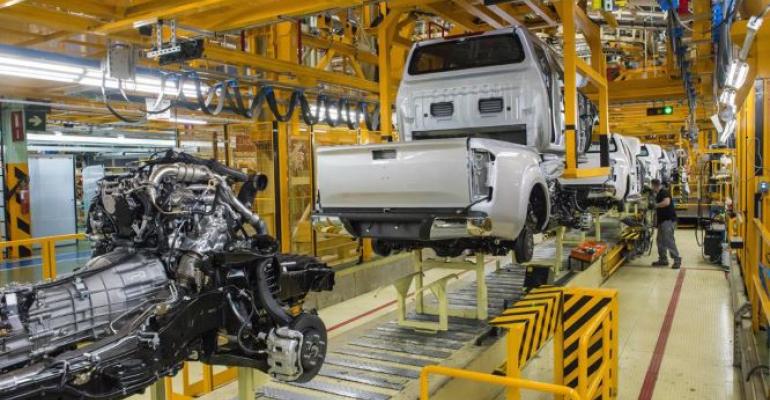 Auto Production in Spain Off to Rocky Restart

Unions representing workers at the Barcelona plant, which is operating at 25% of its 200,000-unit capacity, have not gotten clear answers about the factory’s future and have called for a supplier to strike.

MADRID – Resuming auto production in Spain, where the COVID-19 pandemic drove April car sales down 96.5% from year-ago, is proving to be easier planned than done.

Nissan has ramped up one of two assembly lines at its Barcelona plant where Nissan Navara, Renault Alaskan and Mercedes-Benz X-Class pickups are assembled. But the plant has orders for only 1,300 units of the X-Class, which Mercedes-Benz chose to discontinue after sales plunged from 20,000 units in 2018 to 8,000 in 2019.

After X-Class output ends, the Navara/Alaska line will be halted – as will a second line where eNV-200 electric vans are built.

Unions representing workers at the Barcelona plant, which is operating at 25% of its 200,000-unit capacity, have not gotten clear answers about the factory’s future and have called for a supplier to strike.

“Nissan, like its competitors, is studying the situation with very little visibility on how the European demand for cars will evolve,” Nissan Europe President Gianluca De Ficchy says.

An unnamed industry analyst, however, says Nissan could use the COVID-19 crisis as justification to close both the Barcelona plant and its Sunderland, U.K., facility as part of a restructuring that would see the Japanese automaker quit the European market and concentrate on China, Japan and the U.S.

“Nissan tends to take advantage of world crises to mask its problems in Spain,” the analyst says. “Nissan Europe already took advantage of the great financial crisis of 2008, on the same day the bankruptcy of the Lehman Brothers bank became known, to communicate to the workers of the Barcelona plant that it was in danger.”

An official with CCOO, one of four unions representing Barcelona workers, says his members feel deceived.

“After all, the only thing the company has offered us is to open Line 1 now to build a few hundred units of the Mercedes X-Class pickup for a month and then return home until after the summer,” Miguel A. Boiza, CCOO general secretary, tells the digital newspaper Confidencial.

“So we are not going to allow these Mercedes vehicles to be manufactured if we are not guaranteed beforehand that the Barcelona plant will continue.”

The four unions have called for a strike by 100 employees at a Nissan plant that supplies sheet metal parts and suspensions needed to assemble the X-Class. The goal is to halt production without a strike by the Barcelona facility’s 3,000 employees.

The Spanish operations of another automaker, PSA, remain shuttered by COVID-19. PSA’s plant in Madrid was building 225 units of the Citroen C4 Cactus daily on a single 1,200-worker shift before the pandemic struck. Spanish and French companies that supply the plant have not resumed operations.

PSA has demanded that both the French and Spanish governments allow car dealerships to reopen, contending there is no reason to manufacture cars if they cannot sell them.