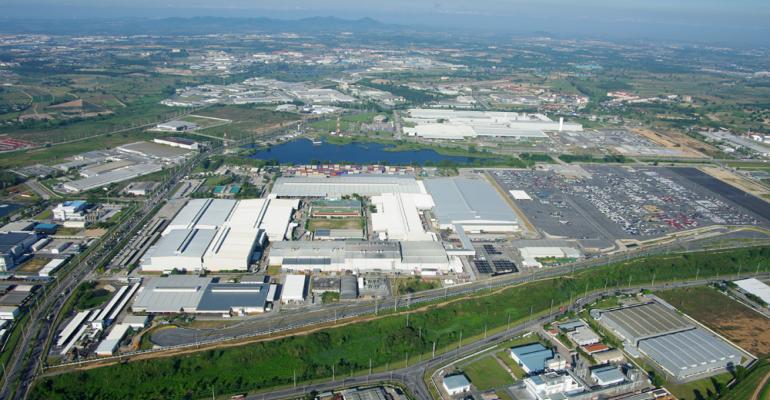 Fifty years ago, Toyota became the first auto maker to locate a plant in Thailand. The latest facility to open is a $450 million Ford factory.

BANGKOK, THAILAND – North of here, in the province of Ayutthaya, a Honda auto plant sits on land once filled with rice paddies; while southeast of the capital,  vehicle factories in Rayong rub shoulders at an industrial park where pineapples used to grow.

Agriculture remains important to this Asian country; rice is the No.10 export product.

But vehicle production now ranks No.2 in export value. About half of the vehicles built in Thailand are sent to countries such as Japan, Australia and other members of the Association of Southeast Asian Nations.

Thailand built more than 1.4 million vehicles in 2011, an off-year due to massive flooding that stymied production. If things go well this year, experts expect output of nearly 2 million units.

“The country depends on exports, beginning with agriculture but developing more toward industrialization,” says Vasana Mututanont, deputy secretary general for the Board of Investment, a unit of Thailand’s Ministry of Industries. “We have to keep on our toes.”

Fifty years ago, Toyota became the first auto maker to build a plant in Thailand. The latest facility to open is a $450 million Ford factory, currently gearing up in Rayong. Initial capacity is 150,000 vehicles a year.

“No other automotive manufacturer has invested more in Thailand over the last five years than Ford Motor Co.,” says Peter Fleet, president-Ford ASEAN. “We are clearly here for the long run.”

As the nation’s auto industry develops, more Thais are becoming vehicle buyers. There are 9.8 million registered vehicle owners, or 6.8 people per unit. That compares with two persons per unit in the U.S. and Japan. In neighboring Vietnam, it is 89 per unit.

“Forty years ago, the cost of one car in Thailand could probably buy a house,” Mututanont says. “For people who could buy a car, it practically became a lifetime possession involving many trips to the repair shop.”

Thailand is second only to the U.S. in popularity of light pickup trucks among consumers. Double-cab and 1-ton models make up 60% of total vehicle production.

It is no coincidence that an auto industry took root in Thailand. The central government spurred it along, offering incentives and tax breaks to companies that located production facilities here.

“There are no restrictions on taking profits out of the country, no reinvestment requirements and no joint-venture requirements,” Mututanont says.

The Thai government now is promoting economic development in rural and remote areas by offering targeted incentives to locate in such regions.

“Labor costs here are reasonable but not cheap,” Mututanont says. “Workers show skill and a willingness to adapt to new technologies.”

Thailand is the No.14 vehicle producer in the world, just behind Iran and ahead of the U.K. Thailand broke the 1-million unit mark in 2005, according to WardsAuto data, but dipped below it in 2009 during the world recession. The peak year was 2010 with 1.64 million units

Thailand has 500,000 workers in vehicle-related jobs in assembly plants as well as large and small parts-supply firms.

The country's goal is to join the world’s top 10 auto makers by 2014 with 16 assembly plants building an estimated 2.5 million units a year, about 1 million of those units sold domestically.

Motorcycle production remains a major industry, with 10 assembly plants. In 2011, Thailand made 2,043,039 motorcycles, with all but 221,164 sold domestically, according to the Federation of Thai Industries.

Through tax breaks and the like, the government is encouraging stepped-up production of auto parts, as well as the heavy-duty plant machinery and tooling necessary to build vehicles.

“Although Thailand continues to industrialize, it is still dependent on foreign-made machinery for the immediate future,” Mututanont says.

Also receiving government incentives are auto makers that locally build fuel-efficient “eco-cars,” such as the new Nissan March and Honda Brio. The Board of Investment has approved five such projects for Japanese auto makers with combined annual capacity of 585,000 units. About 406,000 would be exported.

“But Indonesia is a country of 200 million people and Thailand’s population is 67 million,” Jeerapaet notes.

Neighboring Vietnam has a growing auto industry but lags behind Thailand in transportation development, he says.