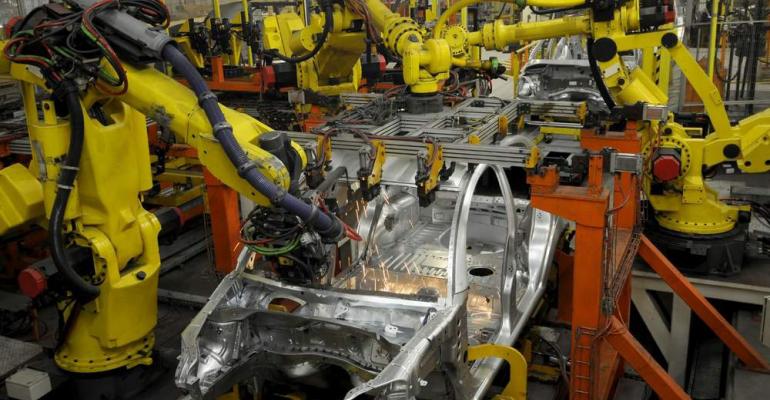 Fueling growth this year is new capacity coming on stream in Mexico where Nissan, Mazda and Honda all will open auto plants over the next six months.

TOKYO – Japan is still the land of robots and the auto industry its major customer.

Global auto makers and suppliers purchased 78,000 units in 2012, 31% more than the previous year. Of these, an estimated six of 10 were sourced from Japanese manufacturers including Fanuc, Yaskawa Electric and Nachi-Fujikoshi.

In value terms, the 2012 total (counting only robot arms) was estimated at $15 billion, according to Morten Paulsen, machinery analyst at CLSA Asia-Pacific Markets. He predicts global demand will grow to nearly $16 billion in 2013.

Fueling growth this year is new capacity coming on stream in Mexico where Nissan, Mazda and Honda all will open auto plants over the next six months:in the case of Nissan, 170,000 B-segmentvehicles in Aguascalientes;  Honda, 200,000 Fitmodels in Celaya; and Mazda, 180,000 Mazda 2 and Mazda 3 units, as well as 50,000 subcompacts built for Toyota in Salamanca.

Until five years ago, the automotive industry accounted for 70% of the global market for robots, says Paulsen. “Today, that share has fallen to around 50% as nonautomotive applications,notably warehousing, have grown more rapidly.”

For Japanese robot manufacturers, 2013 will be the first year since 2007 that they experience an exchange-rate “tailwind,”with the dollar and euro each strengthening 20% over the previous 4-year average.

In the auto sector, Paulsen explains robots traditionally were employed almost exclusively in welding and painting. Now they are seeing increased usage in downstream applications such as windshield and seat installation.