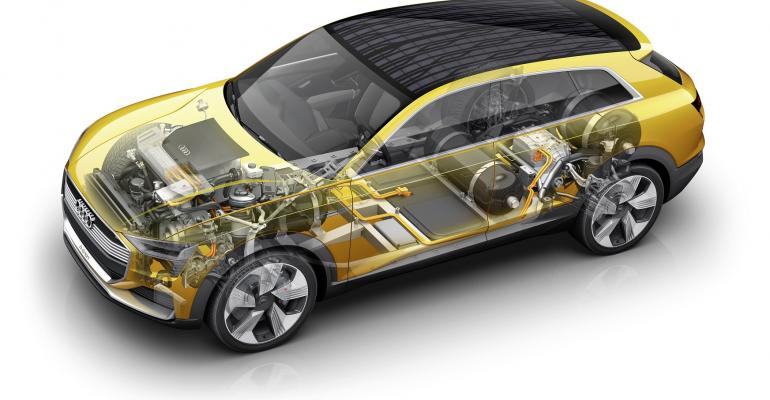 Facing limitations in its battery-electric vehicles, Audi is investing additional resources in hydrogen fuel-cell development to meet future zero-emission transportation needs. Pilot production of Audi h-tron models are likely by 2021 with a focus on the Chinese market.

INGOLSTADT, Germany – Audi is intensifying the development of hydrogen fuel cells in a move that will see it take advantage of recent Chinese legislation favoring the emission-free technology as a means of CO2-neutral propulsion both in cars and commercial vehicles.

The plan calls for the German automaker to fully re-establish its h-tron development program, making Audi a “center of competence” for hydrogen fuel-cell technology within parent company Volkswagen Group.

The renewed focus on fuel-cell development is part of what insiders at the company describe as a key decision recently made by new Audi Chairman Bram Schot to create a long-range alternative to the company’s portfolio of battery-powered e-tron models.

“We really want to speed it up. We are going to put more priority into hydrogen fuel cells – more money, more capacity of people and more confidence,” says Schot, who took the helm at Audi in January.

With more than 30% of its worldwide sales concentrated in China, Audi is seeking to position itself as a leading force in what automotive industry analysts predict will become the largest global market for hydrogen fuel-cell vehicles by 2025.

In mid-March, the Chinese government announced subsidies would shift away from pure electric vehicles to hydrogen fuel-cell vehicles. Consequently, many Chinese automakers are scrambling to ink new joint ventures like that announced by Beijing Automotive Industry Corp. (BAIC), which has joined forces with Toyota to develop hydrogen fuel-cell technology.

As well as aligning itself with new legislation that is expected to provide valuable tax breaks to hydrogen fuel-cell vehicles and expedite the creation of a hydrogen fueling infrastructure in China, the decision by Audi to intensify fuel-cell development also is aimed at protecting the company against concerns related to battery-electric vehicles.

Among the issues facing BEVs are the sourcing of natural resources required for battery production and doubts over the ability of electric cars to deliver on ever more demanding customer expectations in terms of range and charging time.

Fuel cells combine hydrogen held in tanks within the vehicle and oxygen from the air to produce electricity, heat and water. However, their introduction has been held back by the high cost of platinum, which is used as a catalyst in the process that turns hydrogen into electricity. A compound made from cobalt, which is significantly less expensive and more abundant, is being developed as an alternative to platinum.

The electricity created by the fuel cell is used to power an electric motor for propulsion. But unlike the large battery packs used in pure electric vehicles, which typically require hours to charge, fuel-cell vehicles can be refueled in minutes, like conventional combustion-engine vehicles.

With suitably sized tanks, FCVs can deliver range comparable to today’s gasoline-powered vehicles, as exemplified by the Toyota Mirai which boasts an EPA-certified range of 312 miles (502 km).

Schot confirms a sixth-generation hydrogen fuel-cell concept will be revealed by Audi later this year. He also indicates a limited-volume pilot production Audi FCV could be offered to customers as a part of a lease program by 2021.

The new FCV is expected to be produced on a dedicated line at Audi’s Neckarsulm plant in Germany – a site that presently produces the company’s A6, A7 and A8 models – as a rival to the likes of the Mercedes-Benz GLC fuel cell offered on long-term leases in specific European markets.

Timing for volume production of Audi FCV models isn’t established, but Schot is confident it could occur during the second half of the next decade.

The latest Audi h-tron concept is believed to use fuel-cell technology from a cross-licensing agreement with Hyundai, which already sells the Nexo Fuel Cell. The two automakers announced they were joining forces on hydrogen fuel-cell development in June 2018.

At the unveiling of its last fuel-cell concept in 2016, Audi said it had achieved a range of up to 373 miles (600 km) in a vehicle with a refueling time of just four minutes.

The decision to push ahead with fuel-cell development comes in the middle of a broader €14 billion ($15.6 billion) offensive by Audi to launch up to 12 BEVs by 2025.

But Schot points to the scarcity of raw materials and subsequent doubts over high-volume supply of batteries to meet increasing demand as just two concerns facing global automakers in the rush into electric vehicles.

“If this modality is here to stay, then you have to try to find the most effective and efficient way to drive electric,” he says, adding, “And then you come to hydrogen fuel cells.”

The plans to intensify hydrogen fuel-cell development at Audi also center on efforts to create greater range, reduce the need for charging during long trips and to provide electric vehicles with reliable ultra-low temperature operating compatibility. In an extension of its previous program, Audi’s sixth-generation fuel-cell system incorporates a battery that can be charged by plug-in means as part of a hybrid system.

The battery capacity of the latest Audi h-tron is between 35 kWh and 40 kWh, or significantly less than that of Audi’s newly introduced pure electric e-tron SUV with a battery capacity of 95 kWh. It is sufficient, according to at least one engineering source at Audi’s headquarters in Ingolstadt, to provide up to 93 miles (150 km) of range on the battery alone. On-board hydrogen would provide an additional 280 miles (451 km) of range at minimum, endowing the Audi FCV with an overall range in excess of 373 miles.

No performance information is available, but the previous fifth-generation system used two electric motors, one acting on the front axle with 121-hp and another on the rear axle producing up to 188-hp. Each electric motor was allied to a single-speed planetary gearset, which acted as a differential, to drive all four wheels.