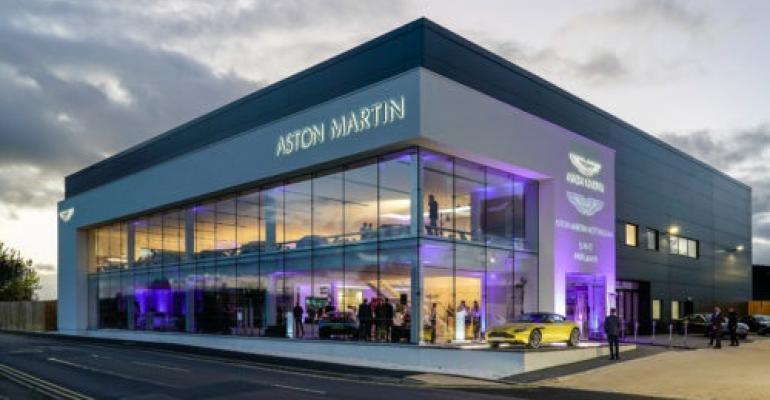 “You catch trends by living in the market,” Palmer says.
Industry News

“The DBX SUV exists because of the booming China market,” Andy Palmer, President and CEO of Aston Martin, tells WardsAuto.

BEIJING – To find proof of the importance of the China market to global luxury brands, look no further than Aston Martin. Long known for its sleek sports cars, the automaker will, in late 2019, launch an SUV.

“The DBX SUV exists because of the booming China market,” Aston Martin President and CEO Andy Palmer tells WardsAuto. “Would Aston Martin have done an SUV if not for the China market? Probably not.”

For makers of luxury products, China is a market of growing importance. For ultra-luxury automakers such as Aston Martin, it is crucial.  From localizing design to selling the lifestyle, the British luxury automaker is sparing no expense to lure Chinese to the Aston Martin brand.

“China is important for our future because we are booming here,” says Palmer, sitting in the Aston Martin stand on a press day at this year’s Auto China show.

Products such as the DBX “have to work in China,” he adds.

Aston Martin’s vehicles are customized to a high degree, including interior and exterior colors. To ensure it caters to Chinese tastes, the automaker announced a partnership with The College of Design and Innovation at Shanghai’s Tongji University.

The joint venture is tasked with, among other duties, “anticipating the color trends for this market,” says Palmer. Chinese consumers tend to prefer “much more vibrant” hues than other markets, he says.

Aston Martin already was designing with the China market in mind. Among the six color schemes suggested for the just-launched DB11 sports car (see photo, lower right) was Shanghai Fashionista. It is described as an “eye-popping Frosted Glass Blue, a specially developed paint finish with embedded glass flakes that give surfaces a deep lustre.”

“This is a result of trying to catch trends,” says Palmer. “You catch trends by living in the market.”

Aston Martin’s sales in China rose 89% in 2017 compared to the previous year to some 350 units, says Palmer. The luxury sports car segment in China is “quite small,” he adds. Aston Martin vies with Ferrari for number one, says Palmer.

The luxury SUV segment, on the other hand, is larger and growing quickly. Bentley has done well in China with its Bentayga SUV. “That is one reason we are entering the market,” says Palmer.

China is the largest market for luxury goods globally, representing about a third of luxury consumption. Sales in China of all luxury goods, including autos, took a hit in 2015 when, as part of an anti-corruption campaign, China’s leadership denounced the practice of extravagant gift-giving.

But the market has recovered. McKinsey & Co. figures that by 2025 China will account for 44% of the global luxury market. China luxury vehicle sales were 2.62 million units last year, up 18% compared to 2016, according to LMC Automotive.

That buying is driven by China’s growing personal wealth, including the world’s second largest number of billionaires, according to Forbes. China had 373 in the 2018 rich list, behind only the U.S. with 585.

Palmer figures Aston Martin’s sales boom in China is driven by its introduction of new models. He also credits his local staff. He has no expatriates working for him in China, says Palmer.

“I think that makes a difference in how quickly we have been able to tell the Aston Martin story,” he says.

They translated Aston Martin’s tagline, “For the love of beautiful,” in a way that resonates with Chinese, he says. “It helped to explain to a relatively alien audience what that is about.”

The typical Aston Martin customer in China is a self-made female between the ages of 30 and 40, usually living in a coastal city, says Palmer.

“They are rewarding themselves” with the purchase of an Aston Martin,” he says.

Aston Martin will launch its DBX SUV in China in late 2019, says Palmer. One-third of expected global sales of 3,000 to 4,000 will come from China.   By the time of the launch, the automaker will have 20 dealerships in China.

A recent announcement that the import tariff for automobiles will be lowered from 25% to 15% may boost Aston Martin’s China sales.

The automaker issued a press release in Chinese that read, in part, “Aston Martin China welcomes the country’s decision to adjust tariffs on car and parts imports, a policy that will benefit consumers and help to boost the market. Aston Martin is evaluating its current pricing system and will respond positively to this government initiative.”

That includes a new Art of Living concept store in Beijing, which is about more thain selling cars. It sells a lifestyle.

“The idea about these stores is that it is something you can walk into and not be pressurized to buy (a car),” says Palmer. “You can learn about the brand, you can enjoy the coffee or the whiskey. Ultimately it is a soft sell.”

Aston Martin also is answering the Chinese government’s call for automakers to sell more electric vehicles. In 2019, it rolls out its first electric vehicle in China – an SUV – under its new all-electric Lagonda marque. Engineered in the U.K., the EV will be sold worldwide.

But, “the move towards EVs is a disruptive move from China,” says Palmer.