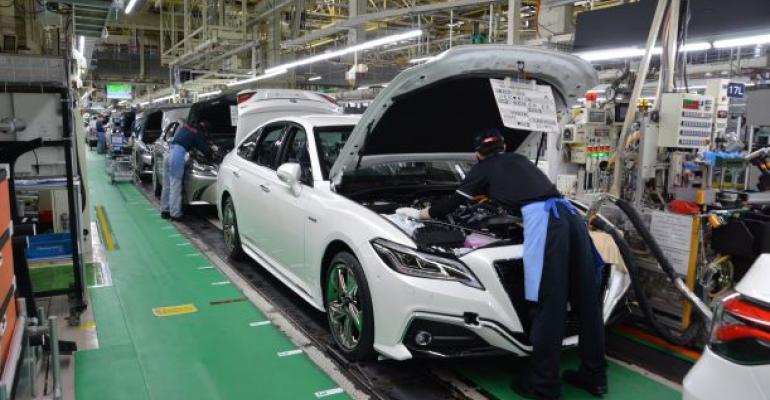 In Japan, despite a sharp drop in exports, plants operating on reduced hours and domestic sales slumping, automakers have been left largely to their own devices to get through the health crisis.

TOKYO – East Asia’s automaking hubs may have been dealing with the COVID-19 crisis better than manufacturing centers in Europe and North America, but the pandemic all the same has harmed the industry in the region.

Government responses have varied, with no major scrappage plans being announced.

In Japan, despite a sharp drop in exports, plants operating on reduced hours and domestic sales slumping, automakers have been left largely to their own devices to get through the health crisis.

Japan’s government in March had announced measures to diversify the industry’s vulnerable supply chain, including financial aid to firms wishing to shift production out of China (at the time still the focus of a major COVID-19 outbreak) to either Japan or Southeast Asian nations, but no support specifically tied to the impact of the coronavirus on automakers’ sales or operations has been forthcoming.

Manufacturers can access government loans and assistance made available across the national economy, but these are primarily designed to support much smaller firms.

“The initiatives mainly focus on small and medium-size enterprises, so Toyota is not utilizing these support schemes,” a spokesperson for the automaker tells Wards. “However, we believe these initiatives will be effective for our Tier 2 and Tier 3 suppliers and we believe this will ultimately support the enhancement and recovery of the automobile industry.”

The immediate outlook for the Japanese auto sector is bleak, however. In March, Japan’s auto exports were down more than 13% from a year earlier, according to data from the finance ministry.

In mid-May, Toyota announced it would suspend production at all 15 of its domestic plants on each Friday in June and cut production at other factories on other days as well. The company says it expects group operating profit for fiscal 2020 to slump 79.5% to a nine-year low of ¥500 billion ($4.65 billion), while global sales will contract 14.9% from the previous year to 8.9 million.

Koji Endo, an auto sector analyst with Tokyo-based SBI Securities, says automakers already were feeling the impact of last October’s increase in Japan’s consumption tax from 8% to 10% when COVID-19 further disrupted their business. Yet he is optimistic that international and domestic sales will bounce back.

“Sales in China seem to be recovering faster than had been expected and we anticipate a steady recovery in the U.S. market from July,” Endo says. “On the other hand, Southeast Asia and India are doing very badly and we’re seeing double-digit declines there, which is bad for companies like Suzuki.

“But overall, I would say that we can expect to see a small year-on-year increase in sales from October or so.”

The outlook is sunnier for the country’s domestic market, benefiting from a 70% cut in the individual consumption tax for cars sold and delivered from March until the end of June, and the fact that the South Korean government conducted a robust program of testing and tracing COVID-19 cases rather than impose sweeping lockdowns.

China’s auto sector also has been hurting because of COVID-19, with initial hits to domestic sales caused by China's being the first center of the disease combining with losses in export sales because of the pandemic.

Car sales from January to April dropped 35.3% year-on-year to 4.43 million, according to the China Association of Automobile Manufacturers (CAAM). The trade group predicts China-made auto sales will plummet 25% in 2020 from 2019 if the pandemic is not well controlled outside the country, which at the time of writing certainly seems to be the case.

There are some encouraging developments. Chinese automakers sold 2.07 million vehicles in the traditionally strong month of April, up 4.4% year-on-year, according to CAAM. However, it was largely due to a surge in commercial vehicle sales, especially heavy trucks.

The Chinese government is being proactive in promoting sales (above, left). In March, its State Council extended subsidies for purchases of electric, hybrid and hydrogen vehicles for another two years to the end of 2022 to help the industry rebound from the COVID-19 pandemic (although it reduced payments available in April by 10%).

In April, the State Council also announced measures to stimulate traditional vehicle sales. For example, China had been scheduled to impose the China-VI emissions standards (similar to the European Union’s (Euro-VI standard) to light-commercial vehicles on July 1 but has delayed this introduction to Jan. 1, 2021.

Also, the government is looking for ways to expand the country’s used-car exports.

– with Wang Fangqing in Shanghai and Jens Kastner in Taipei