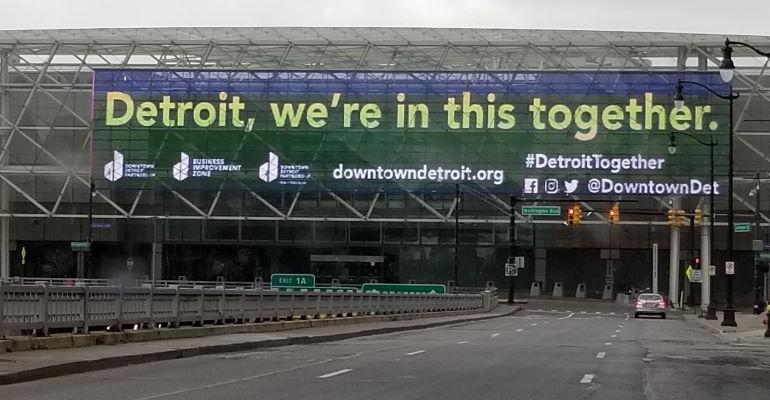 We must wait to see if organizers can pull off this reimagined event at a time when auto shows around the world are struggling.

Much speculation (and skepticism) followed the Detroit Auto Dealers Assn.’s 2018 announcement of moving its annual auto show extravagaza from a traditional wintry time slot in January to June, starting this year.

The idea was to reimagine the North American International Auto Show by not constraining it to the city’s convention center. Instead, the plan was to extend it to include warm-season outdoor activities, giving it a festival feel.

Some people praised the idea. Others panned it. My non-committal position was: We’ll see in June.

Turns out, we won’t. Not this June, anyway.

Like the New York and Geneva auto shows before, organizers scratched this year’s Detroit counterpart because of the COVID-19 pandemic.

(Yesterday, organizers of the Paris auto show, scheduled for October, said the event won't be “in its current form” due to the virus. That likely means virtual vehicle unveilings, similar to what substituted for a real Geneva show last month.)

Hopefully, life will return to normality by June. But right now, as the coronavirus spreads in the U.S., one shudders when envisioning throngs of people mingling at and around a potenial next auto show in Detroit, a city that has seen a spike in COVID-19 cases.

The premier Motor City extravaganza typically draws more than 700,000 people on public days and thousands of industry people and journalists at pre-show events. Such togetherness is unthinkable under the current circumstances. (A Chinese automaker's display at last year's Detroit auto show, left)

In a bitter irony, TCF Center (the auto show's home, formerly called Cobo Center) will become a makeshift hospital to care for victims of the respiratory illness.

Chicago slipped under the wire in February, before social distancing and home sheltering kicked in.

It soon became evident New York’s show in April didn’t have a chance, and Detroit seemed increasingly doubtful as the health crisis intensified.

Here’s hoping all will go well for L.A. in November.

Debate of late has centered on whether automakers’ auto show entrance fees outweigh benefits in an age when consumers do so much auto shopping and research online.

Even before COVID-19, auto shows were struggling, with attendance down worldwide. In Germany, the Frankfurt show, arguably one of the world’s most important, saw attendance fall 30% last September. Organizers plan to move the 2021 event to Munich in an attempt to reverse that slide.

I would argue the shows should go on when things get back to normal. They let consumers comparison-shop under one roof, up close and personal. That's the way it should be when people consider what’s often their second-largest purchase, sometimes their largest.

Yet there’s this sobering thought: Vehicle affordability was a big issue before COVID-19 crashed the economy and caused a public-health crisis. Imagine affordability in a crippled economy with surging unemployment.

When will mainstream consumers be in the mood or in a financial position to buy a vehicle?

GfK AutoMobility just-released research on “intenders” indicates the pandemic will delay many new-vehicle purchases and leases, but 45% of polled potential buyers said the virus will have “no impact” on their plans.

Of the 41% who said it would affect their intentions, the most (47%) foresaw delays of six months or more.

“Although there is clearly some uncertainty in the market, there are also encouraging signs,” says GfK AutoMobility’s Jim Ehrlich, senior vice president-brand consumer experience.

That is at least better-than-bad news. Right now, we’ll take it.

Despite the recent discussions about their modern-day relevancy, auto shows have – or had – this going for them: They bring people together.

We like that. Humans aren’t quite pack animals, but they do enjoy congregating, whether it is at a concert, religious service, party, wedding, sports event – or an auto show. He noted that sheltering, social distancing and working from home preclude face-to-face contact, particularly in the business world.

It’s something that’s missed. “I’d give my eye teeth to have it back,” Carter said. (Steve Finlay, left)

Here’s hoping to see you at the Detroit auto show planned for 2021 – and elsewhere sooner.