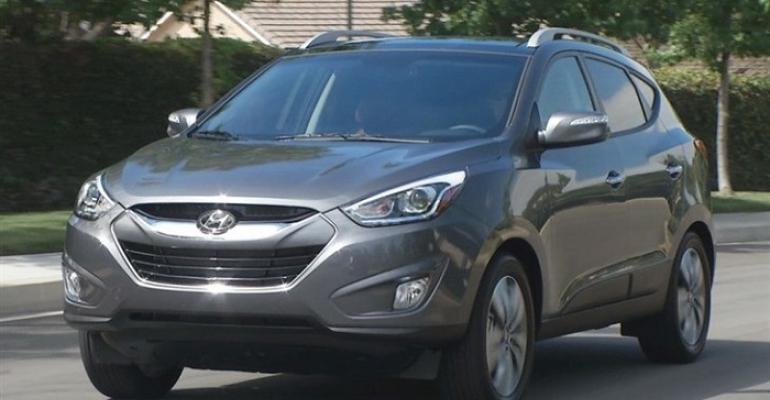 DETROIT – While 53% of all light vehicles sold in the U.S. last year were light trucks, Hyundai registered another year of mostly car sales.

It’s a problem the automaker has spoken of in the past, but is one U.S. company officials seem increasingly urgent about.

“Tucson, Santa Fe and Santa Fe Sport represent about 25% of our volume, and that’s second-lowest in the industry next to Volkswagen. They do 90% cars, we do 80% cars,” Zuchowski tells WardsAuto.

Although the Korean brand continues to grow its calendar-year deliveries in the U.S., hitting an all-time sales record of 725,718 units last year, Hyundai underperformed the industry and its own sales goal.

Zuchowski blames the issue on insufficient supply of CUVs for the U.S., and too few light trucks in the lineup.

“We know what we need to do. We need to get, from our perspective, a disproportionate share of the global production on (Tucson, Santa Fe and Santa Fe Sport), because I don’t think there’s another market in the (world) that has a 55% truck mix,” he says.

Zuchowski estimates Hyundai could grow its CUV volume in the U.S., if it were to get needed inventory.

Speaking to the imported models, union contracts that specify greater car production than light-truck production are an issue, Zuchowski says.

“It’s a negotiation with the Korean labor union (to change) production from sedans to something else…(and) there’s tooling issues. But we’re trying to increase capacity on our crossover vehicles as quickly as we can,” he says.

The brand will be gauging media and consumer chatter on the Santa Cruz as it makes its way around to U.S. auto shows this year.

“There’s plenty of volume just in the U.S. to justify a vehicle like this, so we’re trying to gauge interest and convince the parent (that), ‘We need to put it in the production plan and we need to accelerate it as best we can.’”

Not selling as many light trucks as competitors also affects how Hyundai sells cars.

The U.S. CEO says other automakers use profit-rich light trucks to offset the cost of incentives on their car models.

He partially blames Hyundai’s lack of competitor-matching incentives for the low growth of the Sonata midsize sedan in 2014, and the decline in the Elantra compact lineup.

“If we want to grow on the car side we can, but it’s very competitive and the margins are narrow,” he says.

The age of the current Elantra, four years, also affected its sales, he says. Hyundai hopes the next-generation Elantra due this year will help turn the C-car’s fortunes around.

WardsAuto earlier reported the new Sonata’s nondescript look also was a reason for the car’s underwhelming 2014 sales, and that a redesign was underway.